In a statement by around 40 rebel groups who include some of the military factions who participated in earlier rounds of Geneva peace talks, they said Moscow had not put pressure on the Syrian government to reach a political settlement.

“Russia has not contributed one step to easing the suffering of Syrians and has not pressured the regime that it claims it is a guarantor by move in any real path towards a solution,” the rebel statement said. 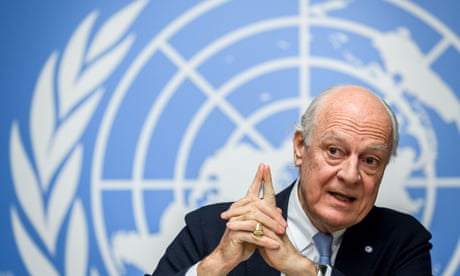 Russia, which has emerged as the dominant player in Syria after a major military intervention over two years ago, received backing from Turkey and Iran for holding a Syrian national dialogue congress in the Russian city of Sochi on 29 January.

“Russia is an aggressor country that has committed war crimes against Syrians. It stood with the regime militarily and defended its politically and over seven years preventing UN condemnation of [Syrian President Bashar] Assad’s regime,” the statement said.

Moscow says it targets militants but rebels and residents say the Russian airstrikes conducted since a major aerial campaign over two years ago has caused hundreds of civilian casualties in indiscriminate bombing of civilian areas away from the frontline.

Some rebels said they had not yet made up their mind.

UN Syria envoy Staffan de Mistura said that Russia’s plan to convene the congress should be assessed by its ability to contribute to and support the UN-led Geneva talks on ending the war in Syria.