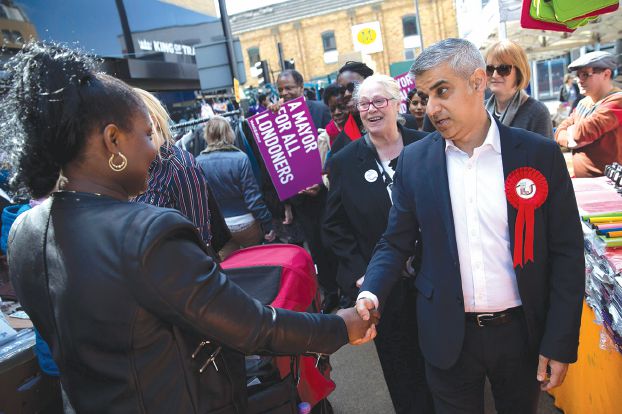 Image credits: Britain's Labour party candidate for London Mayor Sadiq Khan (R), canvasses for supporters at a market in London on May 4, 2016, on the eve of the London mayoral elections. Londoners choose their new mayor on May 5, 2016, after a straight fight between rival candidates Zac Goldsmith and Sadiq Khan dominated by negative campaigning. / AFP PHOTO / JUSTIN TALLIS

Random Impressions from the Euro-Muslim Front

THE LEVANT NEWS -- by Graham E. Fuller -- Apologies to readers for some recent silences, but I’ve been away in Holland as a guest lecturer for three weeks at Leiden University in Holland, a charming and historic university town. During this period I worked to gain a few impressions of what is currently going on in Europe with the refugee issue, Europolitics, and Islamophobia. Here are a few random, passing impressions. Of course they represent huge generalizations, and mainly gleaned from the Netherlands, a few from Belgium and London.

I came back feeling marginally better about the situation than before I went; Europe seems still socially fairly sturdy despite the many recent assaults from terrorism and refugee issues. A sense of concern for sure, but far from panic.

I was heartened to regularly see white Europeans, especially young ones, socializing with Muslims, walking together in animated conversations in Dutch. Some of the younger Muslim women mixing with white European friends wore hijabs— loosely covering the hair and upper shoulders—or a simple headscarf. In Holland women in hijab were a clear part of the ubiquitous bicycle culture. One sees a lot of comfortable social mixing in public, and of course in universities. Lots of mixed gender groups involving young Muslim women. Many are second, even third generation, born in Holland (or Belgium or UK) and of course speak the local language natively. More importantly, they identify as Europeans—perhaps as European Muslims, but definitely Europeans.

You see areas in the cities referred to as “dish cities” with large numbers of satellite disks fixed on the outside of the houses, all receiving television coverage from their countries of origin—especially Turkey or Morocco. (In France much of it would be from Algeria.) Parents and grandparents certainly keep in touch with the “old country” —and perhaps linguistically have no choice—but the younger ones are focused on the country they live in.

In Holland at least, the Turks represent the largest percentage of Muslim immigrants; they reportedly represent a stable community, with less crime and violence (and certainly less involvement in terrorist groups) than the Moroccans, the second biggest group—of whom a large proportion are Berber-speakers from the Rif mountains. But over time Muslims in Europe are known to lose their ties with the ethnic homeland. Yet of course they cannot become ethnically Dutch. At that point a generalized Muslim identity comes to replace traditional ethnicity— as Muslim Europeans.

Turks, interestingly, reportedly possess a strong degree of community cohesiveness, maintain closer ties to Turkey, and mix somewhat less with other Muslims (language being a potential factor). They are disciplined as a community, and seem little involved in terrorism and radicalism. I wonder if such ethnic minority cohesiveness—that is, less actual integration— is desirable in Europe if it leads to more stable communities, than say, among the Moroccans? The mayor of Rotterdam, incidentally, is a Turk.

-Turkish food in particular is the ubiquitous and popular fast food found everywhere.

-Muslim migration to the Netherlands has been reduced over the past decade. Of the immigrant Muslims (including European-born) I spoke to, most were opposed to increased Muslim migration into the country, believing that the European carrying capacity for a larger Muslim wave is limited and can only complicate their own social position. And of course any act of Muslim terrorism represents a vital threat to the well-being of these Muslim populations already struggling for integration and acceptance.

Yet nearly all spoke of being permanently conscious of being immigrants—the “Other” in European society—even where accepted. And while many did not complain about much overt discrimination, many seem to believe that their long-term presence in Europe cannot be taken for granted and could be threatened down the road. For second and third generation Muslims there is of course nowhere else to go except as “immigrants” back to their parents’ country of origin where they feel they have little in common. They are Europeans.

Meanwhile we have just witnessed the heartening case of Sadiq Khan, a British Muslim who has just been elected as mayor of London— and is now the most important Muslim in Europe.

I still fear that Europe cannot bear the brunt, or should not be asked to bear the brunt, of future large waves of Muslim (or other) immigrants coming from the Middle East and Africa. European societies are mostly small and less experienced with large scale migration compared to North and South America or Australia. Yet the US has been shocking unresponsive to accepting Syrian immigrants—only some 1300 so far. Canada has taken double that number, but neither come remotely close to what vulnerable Europe has accepted: Germany has by now accepted one million refugees.

Bottom line: multiculturalism and multi-religious societies are of course already a reality in Europe; there is no turning back as migration becomes a central feature of twenty-first century life: wars (often launched by the US or the West), social and economic hardships resulting from the resulting destruction and dislocations, along with the rigors of global climate change, loss of productive farmland, huge disparities in wealth, and the damage that unstable economic and social conditions visits upon political and economic institutions, with its attendant corruption.

A disturbing straw in the wind: in Europe we know of course of a nativist reaction against Muslims that has fanned emotions on the right—with clear tones of racism and neofascism. But more disturbing is a new intolerance on the left. In Holland, a traditionally highly tolerant society, an anti-Muslim bias has arisen even among some liberal-minded or progressive circles. Dutch society has long valued individualism and outspokenness, with strong streaks of philosophical atheism. Some of these liberal intellectual circles have come to view the religious views of immigrants (and especially Islam) as threatening to the entire European Enlightenment project. That project prides itself on liberation from what they see as the shackles and superstitions of religion and social conformity. Muslim immigrants and Islam are hence perceived as putting at risk these hard-won Enlightenment values, threatening to drag European culture back into the obscurantism of religious doctrine of the European past.

Very interesting insights into contemporary Dutch intellectual currents on the Islam issue can be found in Ian Buruma’s “Murder in Amsterdam” that centers around the murder in 2004 of Theo van Gogh by a Dutch-born Muslim. Van Gogh was a gifted but highly controversial, equal-opportunity racist and bigot who chose to regularly mock Christians, Jews, and Islam. Among his artistic representations, he made a highly provocative film portraying Quranic verses projected onto the writhing body of a nude woman; this was allegedly an immediate cause of van Gogh’s subsequent outrageous public murder.

The cultural challenges are really just beginning. The world will need to decide on how to treat migration pressures at the source over the very long run.

*Graham E. Fuller is a former senior CIA official, author of numerous books on the Muslim World. His latest book is “Breaking Faith: A novel of espionage and an American’s crisis of conscience in Pakistan.” (Amazon, Kindle) grahamefuller.com