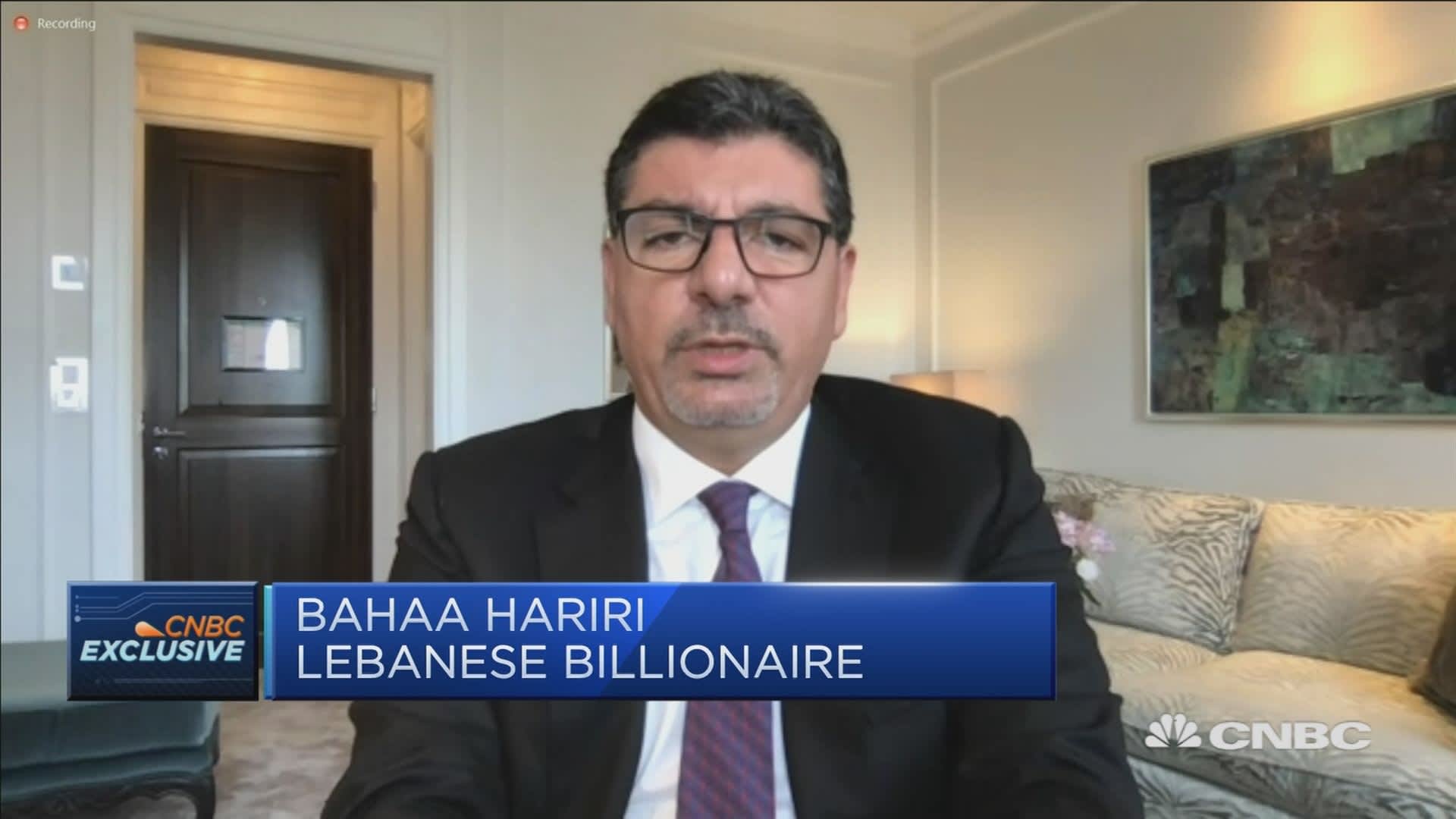 Bahaa Hariri, the eldest son of slain Lebanese statesman Rafik Hariri, is calling for a broad alliance — a “supermajority” — to coalesce around a plan to agree on the way forward for Lebanon as it faces multiple crises.

Such an alliance is needed to implement the unfinished business of the Taif Agreement, the peace deal brokered by Saudi Arabia 30 years ago, Bahaa said as he gave a candid assessment of Lebanon’s situation on Frankly Speaking, the televised interview in which senior Middle East policymakers are questioned on their views about the most important issues of the day.

“We have to make sure that across the sectarian divide, the forces of moderation go hand in hand to put (together) a complete comprehensive plan — whether it’s an economic plan, a COVID-19 plan, a constitutional plan, a judiciary plan, or a security plan,” he said, noting that Lebanese was “at the precipice.”

Bahaa, a billionaire Lebanese businessman, added: “We seek the full support of Saudi Arabia to make sure of the full implementation of the Taif Accord. It is key for us that Saudi Arabia helps us out and supports us in this. That's the key.”

The Taif Agreement, signed in 1989 under Saudi auspices at the end of the bitter civil war, had never been fully implemented, Bahaa said, but remained as a blueprint for achieving progress in the country. “If we are going to come to the Arab world and the international community, they’ll tell us you have an accord, but three-quarters of it hasn’t been executed,” he said.

“If we want a new accord, it may take us another 10 years and maybe half a million dead.”

Referring to the Taif Agreement, Bahaa said: “We need to make sure that this accord is executed to the letter: The separation of religion from the executive and the legislative branches; the establishment of a senate that protects minorities; the establishment of an independent judiciary; and an electoral law that meets the aspirations of all Lebanese. And that we have a new election.”

Having said that, Bahaa made it clear he had no plans to put himself forward as a possible leader of Lebanon as it continues months-long attempts to form a new administration. "I don't have all the answers to many questions and I don't want to be the leader,” he said.

“Today, we don't have a civil war - we have complete mismanagement of a configuration that is in complete divorce. That configuration, of course, is Hezbollah, and the warlords and whoever supported them.

“The situation is only getting worse and that's why we believe that the economic plan and the entire plan that we're putting together has to be around a non-sectarian government, a technocratic government that takes the agenda moving forward.”

By the same token, Bahaa said there should be no role for Iran-backed Hezbollah in the new agenda, and castigated Iran for its destructive interference in Lebanon’s affairs.

“Iran has never given us a penny. It has always supported a terrorist organization called Hezbollah, which is not the Lebanese people but only a sect within the Lebanese people. It has killed people and has tried to destroy everything we're trying, as good Lebanese, to move forward,” he said angrily.

Bahaa contrasted the part Iran has played with the role played by Saudi Arabia, which he said had been a “true friend” of Lebanon. “Saudi Arabia has done a lot for Lebanon. It has helped us with the Taif Accord, and on political stability. It has helped us in putting billions of dollar deposits after Taif to stabilize the currency,” he said.

Bahaa would welcome constructive involvement from the international community to help solve Lebanon’s ongoing crisis, but is wary of further involvement by Emmanuel Macron after the French leader called for the involvement of Hezbollah in the reform process.

“We welcomed (France’s) help, and we welcome any initiative, but as we have said, it has to fall in line with the aspirations of the revolution,” Bahaa said, referring to the protest movement that appeared in Lebanon in October 2019 and intensified after the horrific explosion at Beirut port last summer.

“We welcome all efforts from the international community, but the most important thing is that it has to meet the aspirations of the Lebanese. The Lebanese want total divorce of Hezbollah and the warlords. I don't think Lebanon can afford any more patch-up solutions.”

Bahaa is also hopeful that the new Biden administration in the US, as well as British and European governments, can be persuaded to get involved in the Lebanese reform process. Equally, he is optimistic that the new opportunities presented by the Abraham Accords, as well as the reopening of trade and economic relations between Saudi Arabia and Qatar, can defuse tensions in the Middle East and Lebanon.

Hezbollah is suing Hariri in the Lebanese judicial system after he blamed the Iran-backed group for the explosion, but he is determined to defend the case strenuously. “The alleged offense is that we have tarnished the reputation of a branded global terrorist organization,” Bahaa said. “We believe that — based on the most reputable investigative reporters of the world — that they control the port. Fine, if that's the case. We have the best lawyers who will defend our case.”

The Aug. 19, 2020, verdict of the Special Tribunal for Lebanon, which investigated the 2005 assassination of his father, represented “closure” in the case, but added that there remained substantial evidence of the responsibility of Hezbollah’s senior leadership.“These courts are not after a party; they are after individuals. The courts were very clear in saying that they had evidence, but not enough evidence to indict the others,” Bahaa said.

As for his father’s legacy, Bahaa said it has been squandered in the sense that the opportunities presented by the Taif Agreement have been wasted by successive Lebanese politicians who are responsible for the current dire condition of the country. “We were almost there, and (the current political leaders) have to bear the full brunt and the responsibility of what happened,” he said.

Speaking about his younger brother, Saad Hariri, who was prime minister of Lebanon for six of the last 11 years, Bahaa said his fraternal affection remains, but that political differences were insurmountable, especially relating to Hezbollah and the influence of Lebanese “warlords” over the political process.

Bahaa Hariri said the forces of moderation in Lebanon need to work together across the sectarian divide to tackle the countries crises. (Screenshot/AN Photo)
“He is my little brother and I love him very much. This will never change — not today, not tomorrow, not till the end of my days,” Bahaa said. “But you cannot solve the problems when these cronies are the problem, okay. This hasn't happened just for a year or two; we've been on it for almost 16 years now.”

Thus, he rules out supporting Saad in his efforts to form a new government if he includes terrorist-designated Hezbollah in the administration. “I have stark differences politically with him,” Bahaa said. Asked if he would support Saad in a Hezbollah-influenced government, his reply was: “Absolutely not.”

Bahaa judged that the current Lebanese president, Michel Aoun, was under also the influence of “warlords,” and that international sanctions should be extended to other members of the political establishment, in addition to Aoun’s son-in-law Gebran Bassil, who was placed under US sanctions on corruption charges last year.

“It’s not enough. I think others have to be sanctioned,” Bahaa said. “It is the same for all the warlords, not only one. We cannot take one and isolate the others.” However, he declined to identify further potential targets for sanctions “because in the justice system you are innocent until proven guilty.”

Having been involved in business in Saudi Arabia, Bahaa believes the latest peace breakthroughs in the Middle East can lead to a revival of economic activity and an influx of foreign investment, despite the damage caused by the COVID-19 pandemic.

The biggest venture of his new business enterprise - the $500 million Al-Abdali development in Amman, Jordan - had been only marginally affected by the economic slowdown, he said.