THE LEVANT NEWS — By Reva Bhalla for Stratfor —

Forecasting the shape the world will take in several years or decades is an audacious undertaking. There are no images to observe or precise data points to anchor us. We can only create a picture, and a fuzzy one at best. This is, after all, our basic human empirical instinct: to draw effortlessly from the vivid imagery of our present world and past experiences while we squint and hesitate before faint, blobby images of the future.

In the world of intelligence and military planning, it is far less taxing to base speculations on the familiar — to simulate a war game that pivots on an Iranian nuclear threat, a seemingly unstoppable jihadist force like the Islamic State and the military adventurism of Russia in Eastern Europe — than it is to imagine a world in which Russia is weak and internally fragmented, the jihadist menace is contained by its own fractiousness and Iran is allied with the United States against a rising Sunni threat. In the business world, it is much simpler to base trades and strategies on a familiar environment of low oil prices and high interest rates. Strategists in many domains are guilty of taking excessive comfort in the present and extrapolating present-day assumptions to describe the future, only to find themselves unequipped when the next big crisis hits. As a U.S. four-star general once told me in frustration, “We always have the wrong maps and the wrong languages when we go to war.”

So how do we break out of this mental trap and develop the confidence to sketch out plausible sets and sequences of unknowns? The four-dimensional world of quantum mechanics may offer some guidance or, at the very least, a philosophical approach to strategic forecasting. Brilliant physicists such as Albert Einstein, Louis de Broglie and Erwin Schrodinger have obsessed over the complex relationship between space and time. The debate persists among scientists over how atomic and subatomic particles behave in different dimensions, but there are certain underlying principles in thecollection of quantum theories that should resonate with anyone endowed with the responsibility of forecasting world events.

Einstein described space-time as a smooth fabric distorted by objects in the universe. For him, the separation between past, present and future was merely a “stubbornly persistent illusion.” Building on Einstein’s ideas, celebrated U.S. physicist and Nobel Laureate Richard Feynman, some of whose best ideas came from drawings he scribbled on cocktail napkins in bars and strip clubs, focused on how a particle can travel in waves from point A to point B along a number of potential paths, each with a certain probability amplitude. In other words, a particle will not travel in linear fashion; it will go up, down and around in space, skirting other particle paths and colliding into others, sometimes reinforcing or canceling out another completely. According to Feynman’s theory, the sum of all the amplitudes of the different paths would give you the “sum over histories” — the path that the particle actually follows in the end.

The behavior of communities, proto-states and nation-states (at least on our humble and familiar planet Earth) arguably follows a similar path. We have seen statelets, countries and empires rise and fall in waves along varied frequencies. The crest of one amplitude could intersect with the trough of another, resulting in the latter’s destruction. One particle path can reinforce another, creating vast trading empires. Latin America, where geopolitical shifts can develop at a tortoise’s pace in the modern era, tends to emit long radio-like waves compared to the gamma-like waves of what we know today as a highly volatile Middle East.

If we apply the nation-state as an organizing principle for the modern era (recognizing the prevalence of artificial boundaries and the existence of both nations without states and states without nations), the possibilities of a state’s path are seemingly endless. However, a probability of a state’s path can be constructed to sketch out a picture of the future.

The first step is to identify certain constants that have shaped a country’s behavior over time, regardless of personality or ideology (an imperative to gain sea access, a mountainous landscape that requires a large amount of capital to transport goods from point A to point B, a fertile landscape that attracts as much competition as it provides wealth). The country’s history serves as a laboratory for testing how the state has pursued those imperatives and what circumstances have charted its path. What conditions were in place for the state to fail, to prosper, to avoid getting entangled in the collisions of bigger states, to live in relative peace? We take the known and perceived facts of the past, we enrich them with anecdotes from literature, poetry and song, and we paint a colorful image of the present textured by its past. Then comes the hard part: having the guts to stare into the future with enough discipline to see the constraints and enough imagination to see the possibilities. In this practice, extrapolation is deadly, and an unhealthy obsession with current intelligence can be blinding.

Take Turkey, for example. For years, we have heard political elites in the United States, Eastern Europe and the Middle East lament a Turkey obsessed with Islamism and unwilling or incapable of matching words with action in dealing with regional competitors like Iran and Russia. Turkey was in many ways overlooked as a regional player, too consumed by its domestic troubles and too ideologically predisposed toward Islamist groups to be considered useful to the West. But Turkey’s resurgence would not follow a linear path. There have been ripples and turns along the way, distorting the perception of a country whose regional role is, in the end, profoundly shaped by its position as a land bridge between Europe and Asia and the gatekeeper between the Black and Mediterranean seas.

How, then, can we explain a week’s worth of events in which Turkey launched airstrikes at Islamic State forces and Kurdish rebels while preparing to extend a buffer zone into northern Syria — actions that mark a sharp departure from the timid Turkey to which the world had grown accustomed? We must look at the distant past, when Alexander the Great passed through the Cilician Gates to claim a natural harbor on the eastern Mediterranean (the eponymous city of Alexandretta, contemporarily known as Iskenderun) and the ancient city of Antioch (Antakya) as an opening into the fertile Orontes River Valley and onward to Mesopotamia. We move from the point when Seljuk Turks conquered Aleppo in the 11th century all the way up to the crumbling of the Ottoman Empire in the wake of World War I, when a fledgling Turkish republic used all the diplomatic might it could muster to retake the strategic territories of Antioch and Alexandretta, which today constitute Hatay province outlining the Syrian-Turkish border. 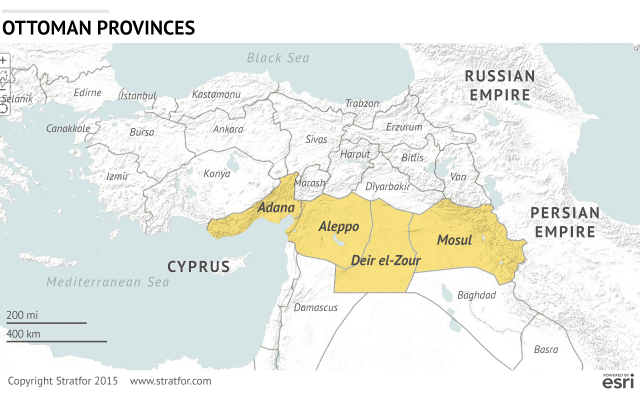 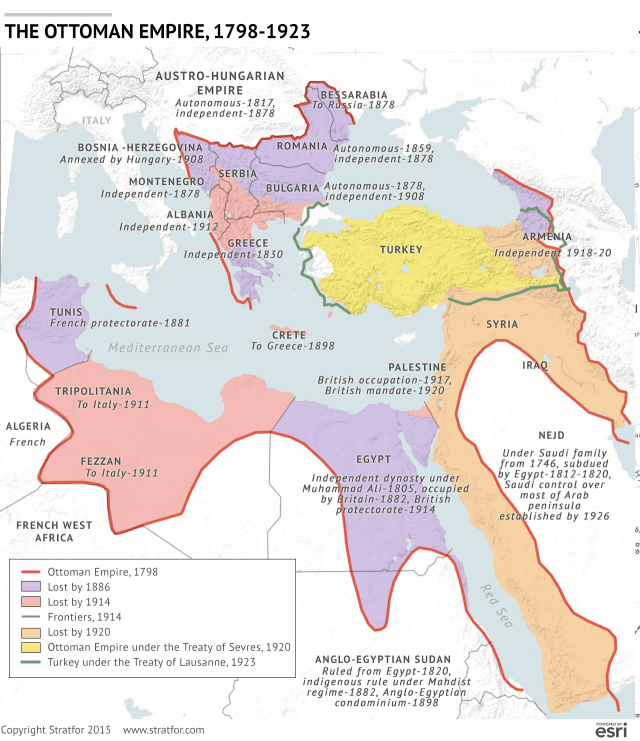 We must simultaneously look at the present. A contemporary map of the Syria-Turkey border looks quite odd, with the nub of Hatay province anchored to the Gulf of Iskenderun but looking as though it should extend eastward toward Aleppo, the historical trading hub of the northern Levant, and onward through Kurdish lands to northern Iraq, where the oil riches of Kiruk lie in what was formerly theOttoman province of Mosul.

We then take a long look out into the future. Turkey’s interest in northern Syria and northern Iraq is not an abstraction triggered by a group of religious fanatics calling themselves the Islamic State; it is the bypass, intersection and reinforcement of multiple geopolitical wavelengths creating an invisible force behind Ankara to re-extend Turkey’s formal and informal boundaries beyond Anatolia. To understand just how far Turkey extends and at what point it inevitably contracts again, we must examine the intersecting wavelengths emanating from Baghdad, Damascus, Moscow, Washington, Arbil and Riyadh. As long as Syria is engulfed in civil war, its wavelength will be too weak to interfere with Turkey’s ambitions for northern Syria, but a rehabilitated Iran could interfere through Kurdistan and block Turkey farther to the east. The United States, intent on reducing its burdens in the Middle East and balancing against Russia, will reinforce the Turkish wavelength up to a point, while higher frequencies from other Sunni players such as Saudi Arabia will run interference against Turkey in Mesopotamia and the Levant. While Russia still has the capacity to project military power outward, Turkey’s moves in Europe and the Caucasus will skirt around Russia for some time, but that dynamic will shift once Russia becomes consumed with its own domestic fissures and Turkey has more room to extend through the Black Sea region.

This sketch of Turkey is by no means static or deterministic. It is, simply but critically, the product of putting a filter on a lens to bring the state’s trajectory into clearer view. The assumptions we form must be tested every day by incoming intelligence that can lead to refinements of the forecast at hand. A quantum interpretation of the world will tell you that nothing is deterministic, and we cannot know for sure that a certain outcome will or will not happen based on the limited information we possess. We can only assign a probability of something happening, and that probability will evolve over time. As Stephen Hawking said, “It seems Einstein was … wrong when he said, ‘God does not play dice.’ Not only does God definitely play dice, but He sometimes confuses us by throwing them where they can’t be seen.”

We can apply the same process to the ebb and flow of the Far East, with a resurgent Japan responding to the reverberations of a powerful China and an artificially divided Korea sandwiched in between. Or, the push and pull between France and Germany on the European mainland as centripetal forces subsume the EU project.

Too often, we see the future as we see the past — through the distorted lens of the present. That is the flaw in our human instinct that we must try to overcome. Constraints will apply, and probabilities will be assigned. But whatever the time, direction or dimension we are operating in when forecasting geopolitical events, we must simultaneously exist in the past, present and the future to prepare for a world that we have yet to know.

Previous Just what is Turkey up to?
Next Israel, not Iran, started Middle East nuclear arms race

They say that history repeats itself. The political turmoil in Lebanon and the ongoing civil …