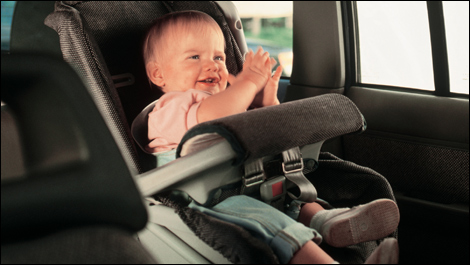 Stabilised child restraint products in vehicles will not be allowed to be sold in the UAE unless there is a matching certificate stating that the seat complies with the country’s standards, according to a senior official.
Abdullah Al Maeeni, Director General of the Emirates Authority for Standardisation and Metrology (ESMA), said the move is in line with international best practices.

ESMA marks the entry into force of the UAE Cabinet Resolution No. 27 of 2017 for the control of child restraint units installed in vehicles.
New child seat rules in UAE
Child safety seat must for children under 10
New child seat law: What parents need to know
The authority has received four requests from major companies in the UAE, during which eight types of children’s seats products were recorded, the official added.

ESMA’s Department of Conformity Affairs has started conducting awareness campaigns for traders and suppliers.
On Sunday, the UAE will commence the the Gulf Traffic Week celebrations.
In July 2017, the UAE Cabinet issued the resolution No. 27 of 2017, which came into force in early March.

The resolution requires all merchants and suppliers to obtain a certificate of conformity with the ESMA before introducing new products in the markets for sale.

The official said that the aim of the sesolution is to provide safe products that conform to the international standards.
To ensure this, the companies have an obligation to use the approved models, said the official.
Manufacturers and traders are also mandated to provide the necessary documents that prove the compatibility of the product with all the requirements of the ministerial decision.
One of the most important requirements is to provide traders with instructions and explanatory data in Arabic and English on the product and to attach instruction manuals with each product, he added.
The regulations cover the installation and maintenance standards.
It also contributes to raising the quality of the products traded in the country and strengthens the national economy in the industrial and commercial sectors.
The official said the ESMA will put in place monitoring programmes and market surveys for these products in coordination with the concerned regulatory authorities at the local level in each emirate, in conjunction with the beginning of the mandatory application of ESMA.
Awareness campaigns

To help raise public awareness on child restraints in vehicles, ESMA has undertaken a number of campaigns.
One was held at Dubai Festival City, which lasted three days to to interact directly and rase awareness of families.
The second one was conducted in conjunction with the Child Safety Campaign of the Supreme Council for Family Affairs in the Emirate of Sharjah.

The Emirates Conformity Assessment Scheme (ECAS) certification program prescribes requirements for product quality and safety for a list of products designated for consumer use.
The ECAS certificate is proof that the product has been approved by the United Arab Emirates (UAE) federal government through ESMA.
The ECAS program is a product certification scheme being implemented by the ESMA as mandated by federal law 28 of 2001.
Authorization in the form of an ECAS registration certificate is issued by ESMA to the UAE importer or distributor after validating compliance with UAE national product regulations.
Both manufacturers and traders may apply for ECAS approval.
Apply for product registration online.

How the child seat works

An infant car seat is designed to protect a child in the event of a crash by forming a protective cocoon.
The seats for newborns are placed facing rearward so that a child will be pushed in to the seat on front-impact and the shell and inlay protect the spine and vital parts of the child.
The raised sides next to the child’s head form a ‘side impact protection system’ in the event of a side collision and prevent the child’s head from moving too much.
The seats belts restrain the child during the trip. They also strap the child in the safest position and hold them there in the event of a rear or side impact, just like the seat belts do for adults.