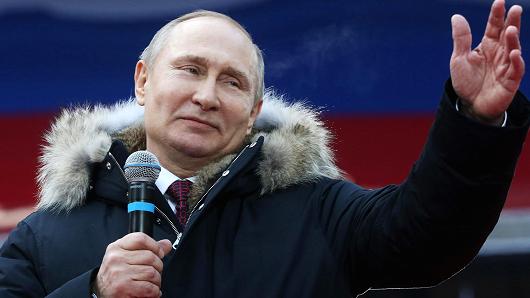 Putin won reelection yesterday. Now he’s a ‘lame duck.’ What will that mean?

To nobody’s surprise, Russian President Vladimir Putin won reelection to a fourth term yesterday, by a wide margin. With Putin’s (last?) presidential election in the books, I reached out to my colleagues at PONARS-Eurasia for a quick take on the implications of Sunday’s election in Russia. Here’s what they had to say.

Brian Taylor, professor, Maxwell School, Syracuse University: Forget Russia’s “elections.” The key thing that happened Sunday is that Putin formally became a lame duck in a political system dependent on one man. Expect a big fight in the coming years about three options: 1) changing the formal rules to keep Putin in charge; 2) an informal arrangement to keep Putin in charge without changing the formal rules; 3) a designated successor. In 2008, Putin went for a combination of 2 and 3.

Pavel Baev, research professor, Peace Research Institute Oslo: The international background for the elections in Russia was distorted by the sharp crisis in relations with the U.K. This illuminated one unusual feature of Putin’s foreign policy agenda for the new term: It is nearly completely absent.

The big plan for building the Eurasian Union is all but abandoned; the partnership with China has lost momentum; the “victory” in Syria is badly damaged by the new spasms of fighting and growing casualties — and the opportunities for combining confrontation with cooperation in relations with the United States have evaporated. Bragging about “wonder missiles” doesn’t help at all in compelling the West to listen to denials of too many crimes.

Kimberly Marten, Anne Whitney Olen professor of political science, Barnard College, Columbia University: The circus acts (yes, there were high wires and clowns) going on at some polling stations were fun to watch, but there were no real surprises here — except that no one stopped people from broadcasting videos on social media of widespread ballot box stuffing.

It will be interesting to see if the Kremlin says or does anything in response to those videos, and whether they have any effect on public opinion about Putin’s legitimacy going forward. Probably they will be quickly forgotten, but there’s always the possibility that someone like Alexei Navalny, an opposition figure barred from participating in this election, will pick up on them to galvanize post-election protests.

Farid Guliyev, independent scholar based in Baku, Azerbaijan: In the famous words of political scientist Adam Przeworski, democracy is a system in which incumbents lose elections. But in Russia and other post-Soviet countries, increasingly the opposite seems to be true. Like a scenario in George Orwell’s “1984,” Putin sits on top of a pyramid of power backed up by state ownership of vast natural resources, control and manipulation of mass media, and the state security apparatus. It is hard to imagine how the ballot box could demote him from that apex.

One thing is clear: The stronger Putin’s Russia becomes, the more tempted it will be to project its power and influence onto its post-Soviet neighbors. Putinism in Russia (coupled with Trump’s assault on checks and balances in the U.S. and cutbacks in U.S. foreign assistance to democratic causes in foreign countries) is likely to eclipse the already dim prospects of democratization in the ex-Soviet states.

Henry Hale, professor, George Washington University: While the big result for Putin seems to reflect continuity and stability, Russia now enters a period of unsettling uncertainty. Here’s the big issue: Putin cannot run again without changing the constitution. Positioning for a possible succession struggle is already on the minds of Russia’s political class. In this light, any changes Putin may make to the cabinet in the next few months will be very interesting to watch.

Joshua Tucker: My own two cents? The question tomorrow will be whether we have entered the first stage of Putin as a lame duck. Even though the next election is six years away, Putin’s ability to control events in Russia will begin to dissipate as soon as it becomes clear he really is not running for reelection in 2024. Thus, it is in Putin’s interest to delay clarity on that point as long as possible. Chinese president Xi Jinping has recently demonstrated one way to do this: abolish term limits. Despite protestations by Putin to the contrary, it is worth watching to see if the door opened by Xi proves tempting to Putin in the future.

Previous Austin explosion may have been triggered by tripwire, police say
Next Syria war: Afrin looted by Turkish-backed rebels