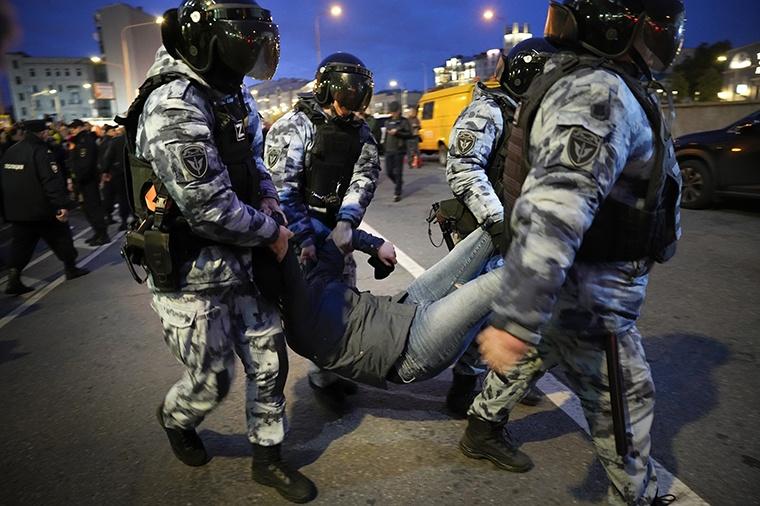 The Russian leader also hinted at nuclear use if “the territorial integrity” of Russia is “threatened.”

Russian President Vladimir Putin announced Wednesday that the Kremlin will mobilize 300,000 reservists, marking a significant escalation of the war in Ukraine.

The decision comes as Ukrainian battlefield successes have put Putin in hot water back home, with hawkish commentators attacking the Russian leader online. The move will mobilize about one fifth of Russia’s 2 million reservists.

In the same speech, Putin appeared to threaten the use of nuclear weapons if the war continues to turn against him.

“If the territorial integrity of our country is threatened, we will use all available means to protect our people,” he said, adding that “this is not a bluff.”

Experts worry that the vague term “territorial integrity” implies that the Kremlin may be prepared to escalate to nuclear war over Crimea, which it considers to be part of its sovereign territory.

George Beebe, the director of grand strategy at the Quincy Institute, argued that the move is “yet another sign that we are in an intensifying escalation spiral with Russia.”

“Each side believes that upping the ante will force the other side to sober up and back down,” Beebe, who previously led the CIA’s Russia desk, said. “But at every stage in this war, each side has reacted by escalating even more.”

For Beebe, the risks of this escalation are stark. “This can only end in a direct confrontation between the world’s two largest nuclear powers unless both sides find a way to compromise,” he said.

Putin also endorsed the upcoming referendums in Luhansk, Donetsk, Kherson, and Zaporizhzhia provinces in which locals will vote on whether to join the Russian Federation. Those regions make up approximately 15 percent of Ukraine’s total territory.

Ukrainian presidential adviser Mykhailo Podolyak called the mobilization “absolutely predictable,” adding that “the war is clearly not going according to Russia’s scenario.”

The U.S. response has been similarly harsh. U.S. Ambassador to Ukraine Bridget Brink called the decision a sign of “weakness” and “Russian failure.”

“The United States will never recognize Russia’s claim to purportedly annexed Ukrainian territory, and we will continue to stand with Ukraine for as long as it takes,” Brink wrote on Twitter.

European powers largely mirrored the U.S. response. A European Union spokesperson said the decision showed Moscow is “not interested in peace” and called the move a sign of “desperation.”

China, whose leader Xi Jinping met with Putin just last week, called for a ceasefire and urged “negotiations and solutions that answer all parties’ security concerns.”

“Every country’s reasonable security concerns should be valued, and all efforts conducive to resolving the crisis peacefully should be supported,” said a spokesperson for Beijing’s foreign ministry. “China calls for dialogue and consultation to resolve the divergences.”