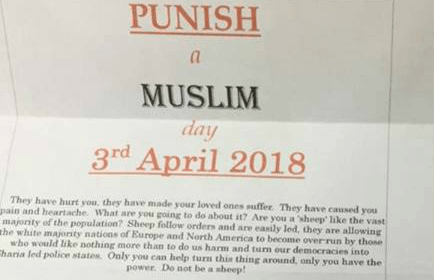 The anonymous letters arrived this weekend in plain white envelopes with second-class stamps, and were sent to people in at least five communities in England.
Inside was a message so hateful that it has sent ripples of alarm across the country and prompted a national counterterrorism investigation.

The message says that April 3 will be “Punish a Muslim Day,” and that points will be awarded for acts of violence: 25 points for pulling a woman’s head scarf, 500 points for murdering a Muslim and 1,000 for bombing a mosque.
Riaz Ahmed, a Liberal Democrat councilor in Bradford, in West Yorkshire County, told The Mirror on Saturday that he had received one of the letters at his business address.
“It seems strange that anyone would send something like this to an address in a predominantly Muslim area,” Ahmed was quoted as saying. “When I opened it and saw the content, I was horrified.”
People in Leicester, London, Cardiff and Sheffield have also reported receiving the notes, according to the authorities, a member of Parliament and an organization that monitors anti-Muslim activity.
The Metropolitan Police of London and other officials have warned Britons to be vigilant, and counterterrorism officials are investigating.
Naz Shah, a member of Parliament from Bradford West, said on Twitter and in a Facebook post that members of her community had received the letters and that the situation had become “very distressful, not only those who have received the letter but also for the wider communities.”
Shah said the North East Counter Terrorism Unit, which is coordinating the investigation, had informed her that the letters appeared to be linked and that “a thorough and professional investigation is well underway.”
“I would appeal to the wider community to remain vigilant and report any suspicious activity to the police,” she said.
The North East Counter Terrorism Unit said in a statement that it had received reports of “potentially malicious communications sent to individuals across the U.K.,” and asked victims to contact their local police.
The significance of April 3, 2018, was not immediately clear. Some neo-Nazi groups use the number 18 to signify the letters of Hitler’s first and last names in the alphabet.
Tell Mama, an organization that tracks anti-Muslim crimes, said in a Twitter post that the hate letters sent out in Britain numbered in the “double figures” and that it was working with the police to investigate the “malicious campaign.”
At least some letters appeared to have been mailed out of Sheffield, the group said.
Iman Atta, director of Tell Mama, told the local news media: “This has caused quite a lot of fear within the community. They are asking if they are safe, if their children are safe to play outdoors. We have told them to keep calm.”
Assistant Chief Constable Angela Williams of the West Yorkshire police said in a statement, “We want to reassure our communities that these communications are being taken extremely seriously.”
She said, “I would urge our communities to be vigilant but not frightened,” adding, “We are stronger when we stand together as one and will not be divided. #WeStandTogether.”
Ahmed told The Mirror that the letter sent to him “was not addressed to anyone, just the address and postcode as if it was sent out randomly.” The Yorkshire Post said at least three letters had landed in Bradford, a historic town in northern England.
The letter appeared to lash out at Britain and countries elsewhere in Europe with migrant, minority and Muslim populations.
“Are you a sheep like the vast majority of the population? Sheep follow orders and are easily led,” it says. “They are allowing the white-majority nations of Europe and North America to become overrun by those who would like nothing more than to do us harm and to turn our democracies into sharia-led police states.”
The 2011 census said Muslims made up slightly more than 4.4 percent of the population in the United Kingdom – about 2.7 million people, compared with 1.55 million in 2001 – and most live in England and Wales. A 2016 perception survey by Ipsos Mori found that Britons overestimated the number of Muslims in the country.
As the Muslim population has grown, the number of hate crimes in England and Wales has risen, according to Home Office statistics. There were 80,393 offenses in 2016-17, compared with 62,518 in 2015-16. That increase, at 29 percent, was the largest since the Home Office began recording figures in 2011-12.
Last year, a British man was accused of ramming a van into a group of Muslims leaving a London mosque, killing a worshipper and injuring several others. The police said the suspect, Darren Osborne, 48, had received a Twitter message from Jayda Fransen, deputy leader of Britain First, a far-right group that gained notoriety after President Donald Trump recirculated unverified anti-Muslim videos it had posted online.
Fransen was arrested in December along with Paul Golding, leader of Britain First, on hate crimes charges after they were accused of posting videos online of their harassment of Muslims in May. Both were convicted this month and sentenced to prison.