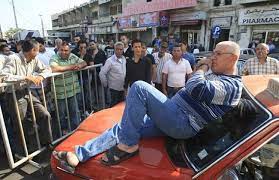 Taxi and public transportation drivers on Thursday blocked several vital roads across Lebanon to press authorities to fulfill promises made to support them economically in the face of a crunching economic and financial crisis that has affected all sectors.

In the capital, the drivers blocked the intersection at the Mohammed al-Amin Mosque in downtown Beirut and the Hamra Street.

Outside the capital, protesters blocked the Dora roundabout and seaside road, the Kfarshima bridge, the Aley roundabout, the Chtaura public road and the Palma highway in Tripoli.

Sit-ins were also organized in Nabatiyeh and Sidon.

All roads were reopened around noon.

Speaking to a radio station, the head of the Unions and Syndicates of Land Transport Sector, Bassam Tlais, said the “escalatory steps” are aimed at “pressing the government to implement what had been agreed on.”

He added that the “escalatory plan” will continue, without specifying a date for the next wave of protests.