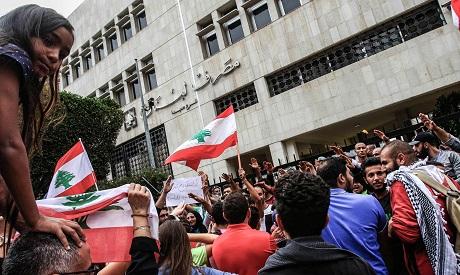 Protests break out over seized money in Lebanese central bank

Humanitarian organizations and associations protested Thursday in front of the Central Bank, urging authorities to free their funds trapped in the banks.

"This is not a political protest," he said. He asked the Central Bank governor to facilitate the bank transfers of these associations and to free all the donations they receive from abroad.

In a statement, the central bank had said it had agreed to give the associations 40% of their money in the banks.

"We need an official circular, not a statement," Hajjar said, adding that "40% is not enough."

Children with physical disabilities and special needs also participated in the protest. "We urge the Central Bank to free our money trapped in the banks in order to stay in our schools," a child said, as another waved to a reporter.

Orphans, elderly, people with disabilities and people in need benefit from these associations that now fail to access their funds or pay their employees.

"After a two-months dialogue, we have reached a dead-end and empty promises," Hajjar said angrily.