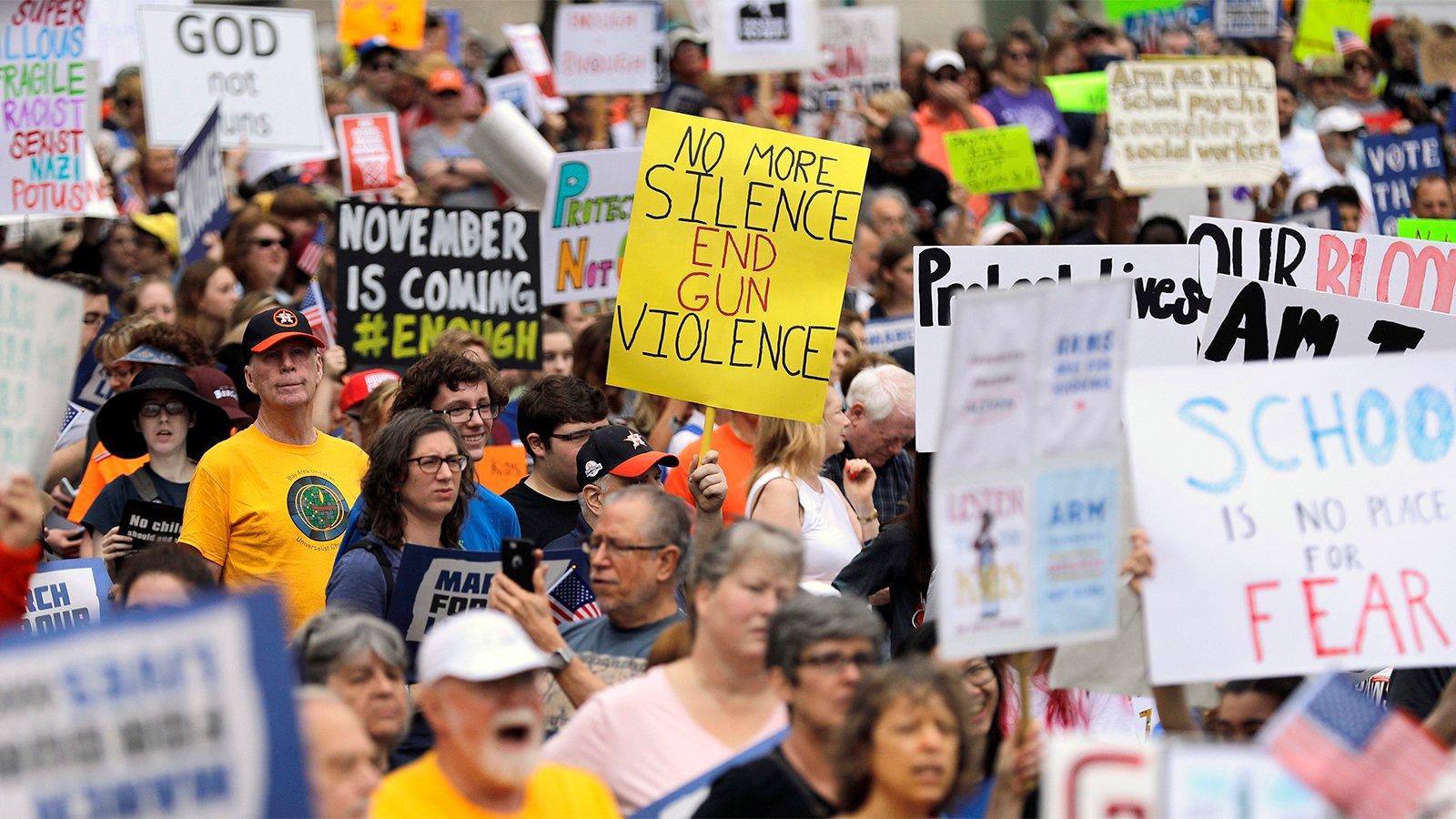 Thousands of people protested for gun control outside the annual National Rifle Assn. convention here Friday, days after the country's latest mass shooting in Uvalde, Texas, in which 21 people were killed, including 19 children.

The scene reflected the mood of a deeply divided country, with NRA opponents and supporters arrayed on opposite sides of the street, hard against two sets of barricades, with dozens of Houston police in between.

On one side, protesters chanted, "Protect our kids, not guns!" and hoisted signs that read, "No more thoughts and prayers" and "Your hobby isn't worth our kids' lives!" On the other side, convention attendees snapped photos and smiled.

"Why are you smiling?" shouted Army veteran Zaykeese Riley, 23, of Houston, who held a sign that said, "Really, again?"

Next to him, Dr. Erik Antonsen, 47, said he works at a nearby emergency room and felt compelled to protest after treating children wounded in shootings.

"Anyone who has ever taken care of a child who's been shot.... I could never be on the other side of this street," he said.

Across the street, Chris Bran of Rancho Cucamonga stood on a bench snapping photos. A salesman with MaxTacs who is exhibiting at the convention, Bran, 40, said he was also a father of three, the youngest 9 years old, the same age as many Uvalde victims.

He said he had "mixed emotions" about the protesters.

Police barred protesters from crossing the street to confront convention attendees. But attendees occasionally crossed to interact with protesters.

Local kindergarten teacher Lauren Sander had just arrived at the protest with her 11-month-old daughter when she ran into a man wearing an NRA lifetime member ribbon and a "Black guns matter" T-shirt. Sander held a sign that said, "Is my class next?"

"There is a fundamental problem that the value of a child, the value of a teacher, is trumped by the 2nd Amendment," Sander, 38, told the man, who identified himself only by his first name, Jason.

Jason, 37, said that he was also a Texan and worked as a firearm safety instructor, and that he believed the Uvalde shooting showed school staff should be armed.

"Many of my friends are the same way, especially the ones that are former military. There has to be some leeway" on gun control, she said. "It's really hard when the answer you hear is, 'Arm the teachers.' I don't want that with my 5-year-olds."

“Unlike some, I didn’t disappoint you by not showing up,” Trump said.

Attendees had to file through metal detectors to see the former president after the Secret Service banned guns at that portion of the convention.

Trump condemned the Uvalde shooting, calling it a "savage and barbaric atrocity,” and called for a moment of silence as he read the victims’ names.

He blamed the shooting on “an out-of-control lunatic” and said school security needed to be stepped up, with armed guards at every facility, instead of restricting gun rights as President Biden and other Democrats have suggested.

"The various gun control policies being advanced by the left would have done nothing to prevent the tragedy," Trump said of the Uvalde massacre. "How many tragedies will it take for them to set aside their far-left agenda and do what it takes?"

Abbott’s political rival, Democratic gubernatorial candidate Beto O’Rourke, appeared at the protest after confronting the Republican governor over gun control at a briefing in Uvalde a day after the mass shooting.

Courtney Harris, 29, of Houston, attended the protest with her three daughters, ages 8, 6 and 11 months. They carried signs reading, "How many more kids?" and listing 10 mass shootings in the U.S. in recent years.

After Tuesday's shooting, Harris said, she kept her eldest daughters home from school out of fear. It didn't matter that Uvalde is 270 miles to the west.

"It's scary. There could be potential shooters in there buying guns for future events," she said, gesturing to the convention center. "I can't keep them out of school forever."

Mandalyn Salazar of nearby League City brought her 15-year-old daughter, a rising sophomore. They were at the front of the protest, where more than a dozen police stood guard, half on horseback, by a massive NRA sign advertising "14 acres of guns & gear" at the conference.

Margaret Askandari carried a sign that said, "Stop the sale of assault rifles. Everyone has a right to life."

"My husband has rifles, but assault rifles are unnecessary," said Askandari, 65, a retired bank trust officer from Houston.

Askandari, who's Mexican American, attended the protest with her son, who's also Persian American. She said she's become afraid after gunmen targeted people of color in Buffalo, N.Y., less than two weeks ago, and in El Paso in 2019.

"What gives them a right to shoot us?" she said.

Inside the convention hall, thousands of attendees milled among displays that featured rows of handguns, silencers, gun safes and racks of customized assault-style rifles. The crowd included many families and some young children.

Troy Tindall picked up a handgun to show his 11-year-old twin sons, who have used his AR-15-style rifle with his supervision. Tindall, 54, a corporate worker in Houston, said he believes the best way to protect children is to teach them gun safety.

He added that he respects protesters' right to free speech and was open to some gun restrictions, like increasing the minimum age to purchase AR-15-style rifles, but said restrictions alone would not halt mass shootings.

Beth Dragoo, 63, who brought her 9-year-old grandson Aiden to the convention from Central Texas, said more needs to be done to secure schools.

"If the advice of the NRA was taken after the last tragedy — they talk about hardening schools — it wouldn't be as much of a tragedy" in Uvalde, Dragoo said.

It was truck driver Henry Cook's first NRA convention. Cook, 68, of Deer Lodge, Mont., was wearing a lifetime NRA member T-shirt. He said he and his wife attended even after his liberal son in Baltimore pleaded with him to cancel after the Uvalde shooting. The Cooks oppose restrictions on guns, including red-flag laws.

"When they take guns away from legal gun owners, who's going to stop the criminals? It makes us victims," Cook said, adding that such actions threaten other constitutional freedoms because "the 2nd Amendment is what guarantees the others."

Nearby, Chris Jensen wore a T-shirt picturing an AR-15-style rifle, with the message, "I prefer dangerous freedom over peaceful slavery."

"That gun didn't kill anybody — a person did," he said, surveying a display of handguns. "This is soul-cleansing. The two things America was founded on: guns and God. Where do we go for freedom if it ain't in America?"

Texas is known for being a conservative, gun-friendly state, but its major cities are run by Democrats, and the party's influence is spreading to the suburbs and rural areas, said Ashton Woods, founder of Black Lives Matter Houston, who helped organize Friday's protest. He saw the convention as Republicans pushing back against the power of urban voters who favor gun control.

“Houston is a progressive city. They came to Houston because they know [Democrats] are slowly moving Texas at every level of government,” Woods said. “[Republicans are] planning to hold on to Texas, and it’s just not happening. This state is moving from deep purple to light blue.”

After the shooting in Uvalde, some Texas Democrats and Republicans have said they plan to pursue “commonsense gun laws,” such as more extensive background checks, red-flag laws and increasing the age limit for buying AR-15-style rifles from 18 to 21. But many expect the NRA to mount lobbying efforts to block such measures, as they have in the past.

“As I talk to my Republican colleagues, they’re so scared to do something; it doesn’t make sense to me. Listen to your constituents, not the NRA,” said Texas state Sen. Roland Gutierrez, whose district includes Uvalde, where he has been meeting with victims’ families.

“I’m a gun owner. I hunt. For me, this was an issue of an 18-year-old being able to walk into a store days after his 18th birthday and pay thousands of dollars for an AR-15, hundreds of rounds of ammunition. At what point does that not raise a red flag?”

“The biggest failure in this incident was the policymakers in Austin, which is the Republican leaders, the governor and others, who have refused to make commonsense changes in gun laws,” he said. "Maybe if that kid had not had access to that weapon, this wouldn’t have happened."

Following the shooting , Abbott and other Texas Republicans have pushed back against calls for gun control by Democrats, including President Biden, urging a focus on mental health instead. Convention attendees and gun rights activists defended the NRA’s decision to move forward with the convention after the mass shooting.

“This isn’t a gun issue. There’s no reason the NRA should not do their convention here,” said C.J. Grisham, president and legal counsel for the gun rights group Open Carry Texas. “This is the perfect time to talk about and defend the right to bear arms, as it’s under attack.”