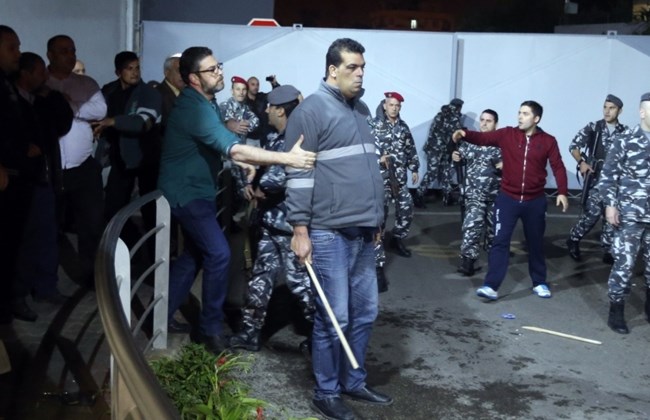 BEIRUT: Garbage will start to be dumped in the landfills of Burj Hammoud and Costa Brava Tuesday, said Agriculture Minister Akram Chehayeb, as activists and Sukleen workers clashed near the firm’s headquarters in Beirut.

“Work will be finalized today in the Burj Hammoud and Costa Brava landfills and they will start receiving garbage as of tomorrow morning,” Chehayeb told a local television station Monday.

He added that more than 1,000 Sukleen and Sukomi trucks were lifting garbage on a daily basis as part of the trash plan approved by the Cabinet earlier this month.

Meanwhile, Sukleen workers and members of the We Want Accountability group scuffled at the firm’s headquarters in Karantina after the activists attempted to protest the waste company’s role in the plan.

“We are here to protest against a company that was appointed [to collect garbage] after it was charged with stealing public funds,” the group’s lawyer Wassef Harakeh told reporters from the scene.

The activists said Sukleen workers came out of their offices with sticks and began beating them as they began to protest.

Police then intervened and were seen pushing back protesters. Footage later showed activists and employees chucking sticks at each over a large wall separating them.

“We didn’t know Sukleen had thugs like this, they take after their bosses,” one activist who was being treated after apparently receiving blows to the face said.

Sukleen and its sister company Sukomi were responsible for collecting Beirut and Mount Lebanon’s waste since 1997. Their contract with the government was meant to end last July, when Lebanon’s worst trash crisis broke out.

They became the center of controversy due to the crisis, which plagued Lebanon for eight months.

The “temporary” Cabinet plan to establish landfills in Costa Brava and Burj Hammoud to end the crisis went into effect Saturday.

First Investigative Judge Ghassan Oueidat set April 11 as the date to begin questioning the companies’ officials on charges of squandering public money and neglecting their duties.