The Ambassador of Uzbekistan to Egypt, Oybek Usmanov, presented a certificate to the Chairman of the Social Solidarity Committee in the House of Representatives (Lower House), Professor Abdel Hadi al-Qasabi, on his appointment as Uzbekistan’s Tourism Ambassador to Egypt.

By Sher Karimov
Professor Abdel Hadi al-Qasabi expressed his sincere gratitude to the leadership of Uzbekistan and noted his readiness to develop tourism and humanitarian cooperation between the two countries. “I am proud to be granted the post of Tourism Ambassador of such a country whose great scholars made a unique contribution to world civilization,” said Professor Abdel Hadi al-Qasabi.

During the talks, the sides noted that the State visit of President of Egypt Abdel Fattah Al-Sisi to Uzbekistan in September 2018 and the documents signed within the framework of the visit brought relations between our countries to a new level.

“Also, for the development of multilateral cooperation, especially in the field of economy, investment, trade, tourism, culture, sports and other areas, it is necessary to launch regular flights between our countries.

After the state visit of the President of Egypt to Tashkent, the Grand Imam of Al-Azhar, Professor Ahmad al-Tayyeb visited Uzbekistan and held fruitful meetings with the leadership of the country,” the professor said. “These days, the issue of increasing the number of scholarships for students from Uzbekistan in educational institutions of Al-Azhar is being considered, and I am sure that in the near future this question will be resolved positively.” 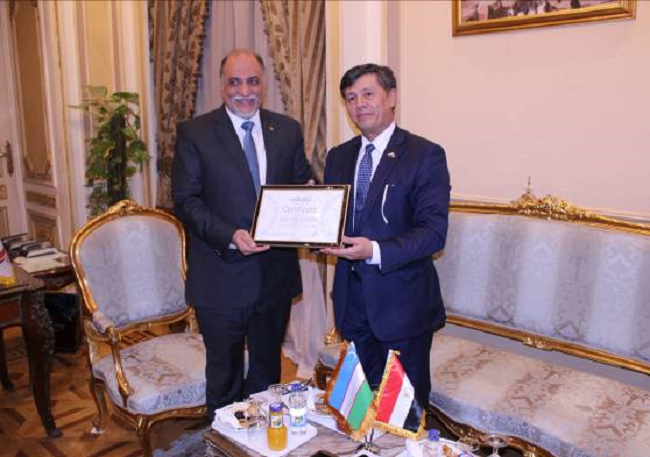 Cultural tourism in Uzbekistan promises to be not less interesting and fascinating than a tour around such centers of tourism as China, India, Greece, Turkey etc. Uzbekistan maintained historical sites similar to ancient countries of similar age or of cultural weath and historical heritage. Uzbekistan has common historical past with each of these countries.

Greeks under the leadership of Alexander the Great came to our land in the 4th century BC, initiating the endless change of ruling dynasties. The Great Silk Road passed from China through the major cities of Uzbekistan to Iran, Turkey and Italy. India has been under the leadership of the Great Moguls dynasty over 200 years. Turkey was conquered by Amir Temur in the beginning of the 15th century.

This invaluable heritage of the past has survived up to the present days and now it turns Uzbekistan cities into the modern oriental fairytale. Certainly you have heard about many of them. There are worldwide famous centers of ancient states, which borders spread far beyond Central Asia.

Samarkand is the legendary capital of Amir Temur’s Empire, supposed to be the most beautiful city in the world. Bukhara is the most important point on the Great Silk Road, the capital of the Persian Dynasty of Samanides, the centre of unprecedented cultural growth of 9-10th centuries.

Khiva is the main city of Khiva Khanate, the museum city, where the each quarter meter has the great number of ancient monuments. Tashkent is the ancient center of oriental culture and spirituality. Every Uzbekistan city will tell you its unique history, and its monuments, museums and sightseeing will tell you more than any guides.