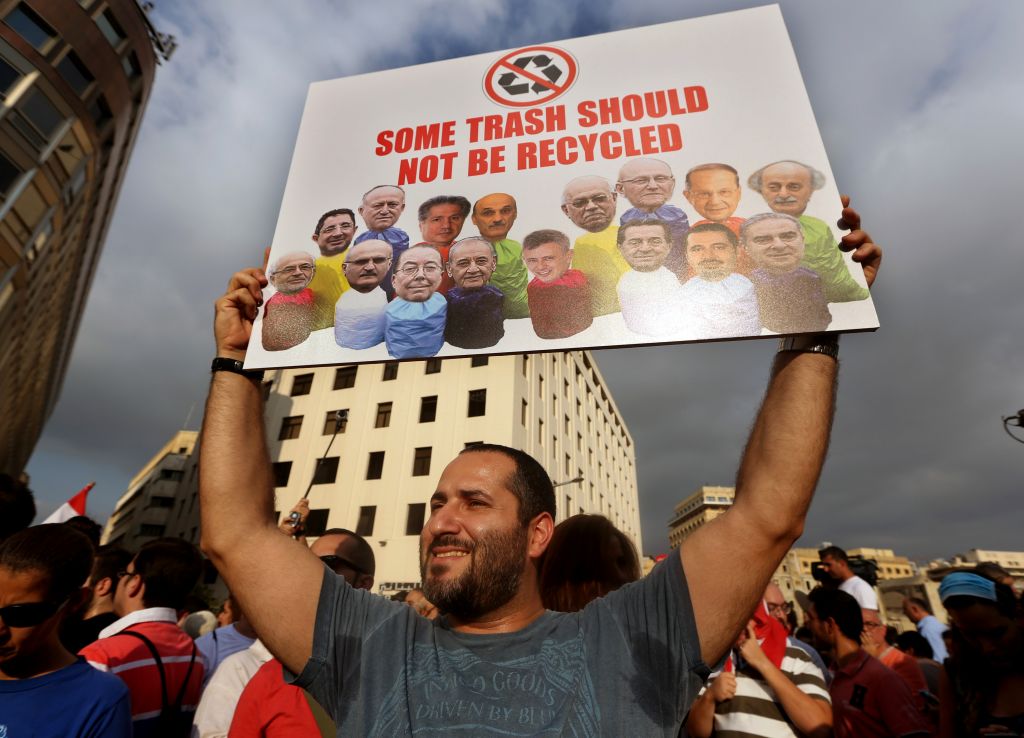 Rest assured dear citizens of Lebanon, the denial shall not set the corrupt and incompetent of the political class free. This too shall pass.

By Mohammad Ibrahim Fheili
Whenever you speak of money with a Lebanese, the focus is on the dollar; everyone has been chasing the dollar each in his/her way. None has been satisfying due to the chaotic monetary policies.

Nowadays, if you have a bank account denominated in US Dollars and you wish to access your account for cash withdrawals, you can draw money from the account but only in local currency (BDL Basic Circular 151).

On the other hand, if you have a bank account denominated in local currency and you wish to access your account for cash withdrawals, you can draw money from the account but only in US Dollars (BDL Basic Circular 161). This is not the end of it.

Monetary policymakers claim that there is an overload of local currency in circulation in the hands of the public, and advocate for a contractionary monetary policy to reduce inflationary pressure; however, Lebanese currently don’t subscribe to that because they are facing a serious shortage of Lebanese banknotes.

Lebanon’s collapse
The country's financial and economic collapse is deepening by the hour, signaling more of the same for the millions of Lebanese who are witnesses to one of the worst economic falls in the history of Lebanon with no end in sight!

However, despite the many colors which have been used to paint the crisis, all eyes and all blame are on one: the turbulent US$/LBP foreign exchange markets - and there are so many of them - and more exchange rates are hinted at at to in the draft 2022 budget.

What is happening in this foreign exchange market is only one of the many consequences of many years of corruption, and categorically dismissing numerous calls for reforms from many credible sources such as the IMF, the EU, the USA, and many others who are friends of Lebanon.

The strain on liquidity in US dollars, and the abundance of Lebanese pounds in circulation, which emerged recently, are other lingering symptoms of this failed statehood. Lebanon has only one problem: a corrupt political system; and every other ill the nation has is deep-rooted in corruption.

It is no longer if, what, or when; it’s corruption that caused a total loss of trust & confidence in the financial system which reflected on Lebanese’s willingness to accept any money that is produced by this ‘system’ in the free exchange of goods and services.

Money occupies a unique position in a free economy. In its absence, the whole prosperous economic life would collapse like a pack of cards. Money must be made available in an adequate quantity to serve its functions, which are a medium of exchange, a measure of value, the standard of deferred payments, store of value, and transfer of value.

There are other functions, which are contingent, such as distribution of income, measurement, maximization of utility, etc. Here, I am talking about money in general. In Lebanon we have been blessed with a multi-currency monetary system (mostly dual, Lebanese pound and US dollar); and, thanks to our corrupt politicians, this blessing turned into an utter curse.

For years Lebanese have been able to use the -Dollar, Euro, and Local currencies to finance household and business expenditures. Several foreign currencies functioned like money side by side with the Lebanese pound.

The choice of currency favored the Lebanese pound up until late 2017. Awareness over the unsustainability of the public debt, the deterioration in the capital account, and the refusal to reform forced economic agents to seriously consider resorting to safer alternatives: currency substitution, acquiring assets, and others.

However, the sudden eruption of the financial crisis in late 2019 made that switch near impossible. Unexpectedly, banks decided to seal their vaults on dollar withdrawals and outgoing transfers.

Now that the safety net is no longer available, the corrupt government embarked on a fast-track journey to debt monetization causing an alarming and steep drop in the buying power of disposable income! Debt Monetization is a corrupt politician’s number one policy option.

Corruption and Debt Monetization
Any government that issues its currency could, in theory, continue to create money without limit. The idea that governments either have to tax or borrow to spend is just a consequence of the legal and institutional infrastructure we, as a society, have created.

Things could be different, but when the monetary printing press is in the hands of corrupt politicians, the temptation to inflate a currency is strong. There is the fear that excessive printing of money and subsequent spending will lead to inflation, then hyperinflation, and then eventual abandonment of the currency; we are almost there. Those of us who could abandon the Lebanese Pound; others have been suffering the consequences.

To mitigate these fears, responsible governments have delegated the power of money printing to independent central banks hoping to keep fiscal policy considerations separate from those of monetary policies.

Since the primary goal of central banks is to maintain price stability (usually interpreted as a low and stable price level), governments should not depend on central banks to fund their operations.

Now you know where things went astray here in Lebanon; the Central Bank (Banque du Liban – BdL) has been too close to the ruling political class for comfort and gave up on its independence. Consequently, the temptation and the pressure to cater to the corrupt and incompetent of the political class became the rule instead of the exception of monetary policies.

On the other hand, any government that issues debt over what it could honor is perceived as excessively risky, and it will likely have to pay increasingly higher interest rates. Therefore, the willingness of the private banking sector to hold government debt must depend on the return and riskiness of that debt relative to alternative investments.

Lebanon chartered the path of holding an excessive volume of government debts denominated in both local and foreign currencies. Unhealthy and unsustainable exposure to sovereign debt, no doubt.

It is corrupt politicians’ heaven on earth; man-made heaven. Therefore, it was rather easy to seize the moment and embark on a path to total debt monetization – printing money to finance expenditures including servicing the debt. Under the circumstances, what’s the fate of the Lebanese pound? We cannot think of life without money; if and only if money serves its raison d'être!

What is money?
What is money? It is anything that is generally accepted in exchange for other things and which can discharge all obligations, past, and present. According to the conventional approach, money is defined on the basis only of its function as a medium of exchange.

When so defined, money includes:
 Fiat Money is a currency established as money, often by government regulation, but that has no intrinsic value. Fiat money has value only because a government maintains its value. The extent of acceptability of Fiat Money as money is contingent upon the level of trust one has in the government issuing the currency. And everyone knows where the government of Lebanon stands on the issue of trust. Therefore, all Lebanese switched to fiat money they trust; the US dollar is the lesser of two evils.

 Bank Money (deposits, plastic cards, etc.) takes on a different form. Checks, for example, are not accepted by all. They are accepted only from known persons and/or entities! If you have a reason not to trust the issuer of the check (the account holder and/or the depository institution), you would not accept it. The same holds for plastic cards (or E-money). The extent of acceptability of Checks and E-Money (i.e., bank money) as money is contingent upon the level of trust one has in the institution issuing the check/card. And everyone knows where Lebanon’s financial institutions stand on the issue of trust. It doesn’t matter what is the currency denomination of your bank account; it has lost much of its acceptability as “bank money”. That’s why Lebanon has become a cash-intensive economy. Even that has not been satisfactory.

For money general acceptability is essential. One can easily infer what the essentials of good money can be. The basic ingredient of good money is that it must be:
a) stable and not rapidly change in value,
b) a generally accepted medium of exchange,
c) a suitable unit of account.
d) a suit¬able store of value, and capable of trans¬ferring value

By now one can easily understand why we have money, not necessarily currency, the crisis in Lebanon. Simply put, the Lebanese economy is currently functioning, or not, without money! Even the cash dollar in our pockets is no longer stable in exchange.

The Lollar
MONEY IS AS GOOD AS WHAT ONE CAN DO WITH IT, and that’s what is no longer clear in the hearts and minds of Lebanese households and investors! When we have a stable and generally acceptable medium of exchange that is suitable as a unit of account and a store of value, then we have ‘money’ and the choice of currency and/or money (fiat and/or bank money) becomes of little significance.

The main issue is, then, money not currency! If the road to economic recovery is likely to belong, the road to reclaiming the real worth of our Money (Fiat and bank money) will be much longer.

In the absence of trust, there shall be no money! It is not about the US Dollar, the local dollar (Lollar), or the Lebanese pound! Government actions, or lack of, continue to be at the root cause of every ill Lebanon is suffering from.

The financial crisis could have been avoided had some reforms been applied. The economic fall could have been gentler had the decision to suspend the payment and the service of "Eurobonds" been taken in conjunction with simple measures, most important of all is the simple act of communicating with bondholders.

Mohammad Ibrahim Fheili is a senior Lebanese Banker and Risk Strategist & Capacity Building Expert. He has over 30 experience in the Levant region. He frequently contributes to The Levant News.