Pragmatic English legal system as a model in Uzbekistan’s FEZ

Free economic zones can be a driving force to attract foreign direct investment and technologies, accelerate the process of industrialization and increase trade in Central Asia.

The Asian Development Bank (ADB) says, that, FEZ entities operate on preferential terms and enjoy tax, customs, administrative and financial benefits. As countries develop, FEZs can be transformed from more manufacturing sites to hubs for innovation and modern services in the region.

There was held a meeting between Uzbek and English government officials in London on June 27. The Uzbek authorities decided to implement the English law system at the Navoi Free Economic Zone, Uzbekistan Justice Minister Ruslan Davletov said at this meeting. And also Uzbek Minister mentioned about the importance of creating an appropriate infrastructure and system to ensure the full functioning of English law as a tool for the legal regulation of the FEZ participants’ actions. According to Vice-President of the UK Law Society Simon Davis, the use of English law will have a beneficial effect on the development of Uzbekistan as a whole, because the world business trusts this system. He expressed readiness to assist Uzbek colleagues in implementation of this practice in Uzbekistan. 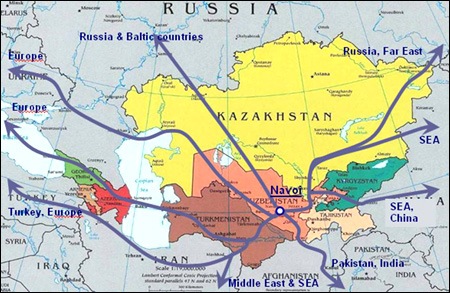 Also, the Uzbek delegation discussed with the Registrar and the Chief of Staff of the AIFC Court, Christopher Campbell-Holt the principles and norms of the English law, as well as the risks and expected results of creating the special legal regime.

It should be noted that the English legal system has a reputation of being efficient and fair and attracts many foreign companies and citizens. According to the Commercial Courts Report 2018 by Portland Communications, litigants from 69 countries participated in cases before the London courts between March 2017 and April 2018.

Later a delegation of the Justice Ministry of Uzbekistan also visited Nur-Sultan (Kazakhstan) to study the practice of English law at the Astana International Financial Center (AIFC).

It needs to be generated as information that nowadays three FEZs are acting in Uzbekistan — Navoi, Angren and Jizakh. They started activity in 2008 and are rather young compared to neighbor countries.

The participants in Navoi free economic zone are exempted from all taxes and customs duties, except VAT, for a period of three to 10 years, depending on the investment size. The FEZ entities are protected against tax changes in the country, and they will pay current taxes until 2030. Angren and Jizakh zones have got also big privileges for the participants.

Lebanese officials knew of explosives since July and did nothing, documents reveal