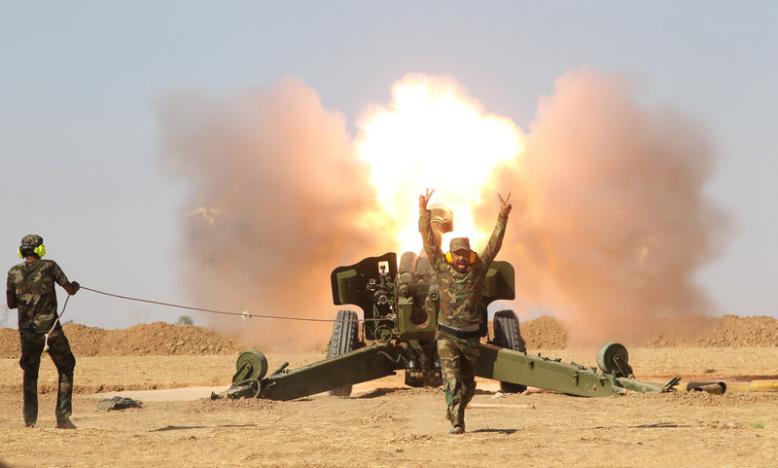 By Stephen Kalin and Ahmed Rasheed for REUTERS | Iraqi Shi’ite militias launched an offensive toward the west of Mosul on Saturday, an operation that will tighten the noose around Islamic State’s Iraq stronghold but has alarmed Turkey and could inflame tensions in the mainly Sunni area.

The battle for Mosul is expected to be the biggest in the 13 years of turmoil unleashed in Iraq by the 2003 U.S.-led invasion which toppled former president Saddam Hussein, a Sunni Muslim, and brought Iraq’s majority Shi’ite Muslims to power.

A spokesman for the Shi’ite militias, known as the Hashid Shaabi (Popular Mobilisation) forces, said thousands of fighters “started operations this morning to clean up the hotbeds of Daesh (Islamic State) in the western parts of Mosul”.

The city is by far the largest held by the ultra-hardline Sunni Islamic State and its loss would mark their effective defeat in Iraq, two years after their leader Abu Bakr al-Baghdadi declared a cross-border caliphate in parts of Iraq and neighboring Syria from the pulpit of a Mosul mosque.

The Shi’ite militias aim to capture villages west of Mosul and reach the town of Tal Afar, about 55 km (35 miles) from the city, the Hashid spokesman said. Their goal is to cut off any option of retreat by Islamic State insurgents into neighboring Syria or any reinforcement for their defense of Mosul.

But their deployment close to the border with neighboring Turkey prompted a warning from President Tayyip Erdogan, who said Ankara aims to reinforce its troops on the frontier and threatened a “different response” for the militias if they “unleash terror” in Tal Afar.

Turkish troops have been training Sunni tribal combatants at an Iraqi camp northeast of Mosul, but a spokesman for the Shi’ite militias said earlier on Saturday the Turks were in no position to obstruct their advance.

The Iran-backed and battle-hardened paramilitaries bring additional firepower to the nearly two-week-old campaign to recapture Iraq’s second largest city from the jihadist group.

Iraqi soldiers and security forces and Kurdish peshmerga fighters, backed by a U.S.-led air coalition and thousands of Western military personnel, have been advancing in the last 13 days on the southern, eastern and northeastern fronts around Mosul, which remains home to 1.5 million people.

The United Nations has warned of a possible humanitarian crisis and a potential refugee exodus from Mosul.

Villagers from outlying areas around Mosul have told Reuters that women and children were being forced to walk as human shields alongside retreating Islamic State fighters as they withdrew into the city this week.

Iraqi and Western military sources say there had been debate about whether or not to seal off Mosul’s western flank. Leaving it open would have offered Islamic State a chance to retreat, potentially sparing residents from a devastating, inner-city fight to the finish.

Some civilians fleeing Mosul have used the roads to the west to escape to Qamishli, in Kurdish-controlled northern Syria. Others, from villages just outside Mosul, have exploited the chaos to flee in the other direction.

“Some people fled the other day so we took a chance. Daesh fired two bullets at us but they missed and we made it,” said Ahmed Raad, 20, from the village of Abu Jarbuaa northeast of Mosul, who had found refuge at a peshmerga base.

The International Organisation for Migration said on Saturday 17,520 people have been displaced so far during the Mosul operation – excluding thousands of people forced back into the city by Islamic State.

Nearly two weeks into the Mosul campaign, troops advancing along the Tigris river valley south of Mosul are still much further from the city than Kurdish peshmerga fighters and an elite army unit advancing from the east.

Thirty km (20 miles) south of Mosul, Iraqi rapid response forces entered the Sunni town of al-Shura on Saturday, once a significant base for Islamic State where the jihadists enjoyed strong support.

An intelligence officer said that most of the Islamic State insurgents appeared to have pulled back north towards Mosul, leaving just a small number to try to slow the advancing security forces.

Captain Abbas Shakir, speaking at the western edge of the town, said Islamic State fighters had built up defenses in the east and the south. “The enemy was surprised by our entrance from the west … They dropped their weapons and fled,” he said.

Shakir told Reuters that security forces had taken the center of al-Shura and raised the Iraqi flag, killing 50 to 60 Islamic State insurgents. The remaining jihadists were firing from the eastern edge of the town, and security forces responded with artillery fire and air strikes.

An Iraqi military statement later said al-Shura was under full control of the security forces. It also said the Shi’ite militias had captured a dozen small villages west of al-Shura, around 60 km (40 miles) southeast of their target, Tal Afar.

Saturday’s announcement by the Shi’ite militias added another force to the coalition of fighters seeking to crush Islamic State in Iraq, but will also raise concerns about the role the Popular Mobilisation fighters will play.

Targeting the Islamic State-held town of Tal Afar, close to Turkey and home to a sizeable ethnic Turkmen population with historic and cultural ties to Turkey, will alarm Ankara.

But many of the Tal Afar Turkmens are also Shi’ites, and its location on the road west to Syria gives it strategic importance to the Iranian-backed militias who have supported President Bashar al-Assad in Syria’s five-year civil war.

Erdogan, speaking to reporters in Ankara, said Turkey considered Tal Afar to be an entirely Turkmen town, half Sunni and half Shi’ite. “If Hashid Shaabi would unleash terror (there), our response would definitely be different.”

Hashid spokesman Ahmed al-Assadi said the Popular Mobilisation forces, who have already fought in support of Assad in Syria, would cross the border into Syria to support him again once they had “cleared” Islamic State from their own country.

Human rights groups have warned of possible sectarian violence if the Shi’ite paramilitaries seize areas where Sunni Muslims form a majority, which is the case in much of northern and western Iraq.

The government and the Popular Mobilisation forces say a limited number of violations occurred and were investigated, but they deny abuses were widespread and systematic.

Previous War pushes Yemen to partition, thwarting peace efforts
Next A picture and its story: Severe malnutrition in Yemen