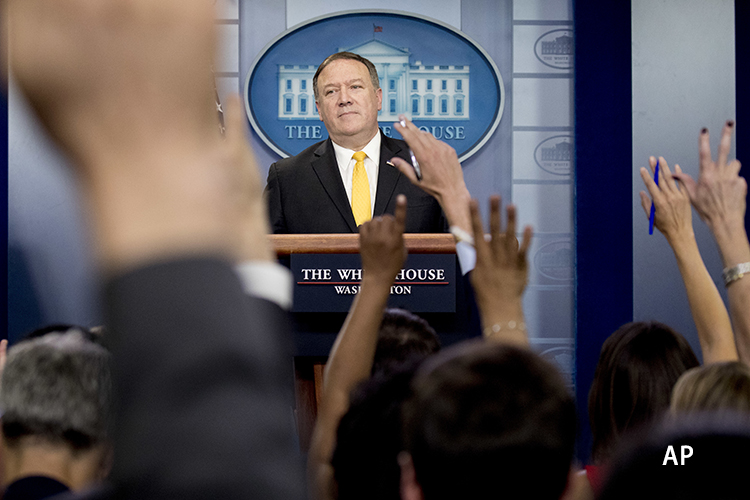 U.S. Secretary of State Mike Pompeo said Washington is considering sanctions and other restrictions on those involved in the arrest of over 50 people in Hong Kong and warned it could target the territory’s economic and trade office in the United States.

In a move likely to further rile Beijing, Pompeo announced in the same statement that U.S. Ambassador to the United Nations Kelly Craft would visit Chinese-claimed Taiwan, which is not a UN member due to China’s objections.

Pompeo also said he was “appalled” by the arrest of an American citizen as part of Wednesday’s crackdown and added: “The United States will not tolerate the arbitrary detention or harassment of U.S. citizens.”

Hong Kong police arrested 53 people in dawn raids on democracy activists on Wednesday in the biggest crackdown since China last year imposed a security law which opponents say is aimed at quashing dissent in the former British colony.

Among those detained was American lawyer John Clancey, a source at his firm said.

Pompeo called the arrests an “outrage and a reminder of the Chinese Communist Party’s contempt for its own people and the rule of law.”

“The United States will consider sanctions and other restrictions on any and all individuals and entities involved in executing this assault on the Hong Kong people,” Pompeo said.

He said it would also “explore restrictions against the Hong Kong Economic and Trade Office in the United States, and take additional immediate actions against officials who have undermined Hong Kong’s democratic processes.”

Pompeo’s statement came after a day of turmoil in Washington that saw supporters of U.S. President Donald Trump storm the U.S. Capitol in a bid to overturn his November election defeat.

Lawmakers on both sides denounced the action by Trump’s supporters and called it an embarrassment to American democracy that would play into the hands of rivals like China.

“It kind of bolsters their claim that we’re falling apart and they’re the country of the future,” Republican Senator Marco Rubio, a China hawk, told Tucker Carlson on the Fox News channel.

On Wednesday, the Chinese embassy in Washington issued an advisory on its website, warning Chinese citizens to strengthen safety precautions in light of the “large-scale demonstration” in Washington and the curfew announced by the local government.

Trump has pursued hardline policies towards China on issues ranging from trade to espionage and the coronavirus and his administration has imposed sanctions on Chinese officials for crushing Hong Kong’s pro-democracy movement and other alleged rights abuses.