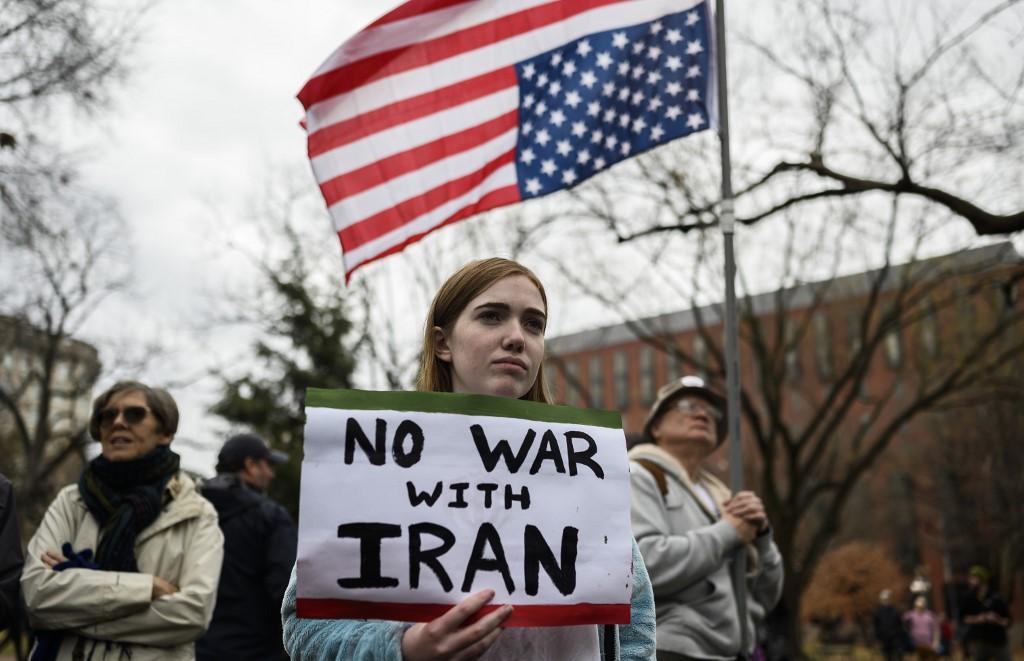 Image credits: Anti-war activist protest in front of the White House in Washington, DC, on January 4, 2020. - Demonstrators are protesting the US drone attack which killed Iran's Major General Qasem Soleimani in Iraq on January 3, a dramatic escalation in spiralling tensions between Iran and the US, which pledged to send thousands more troops to the region. (Photo by ANDREW CABALLERO-REYNOLDS / AFP)

On the eve of a new round of negotiations between the world’s powers and Iran to restore the 2015 nuclear deal, the vast majority of voters believe that the United States should use diplomacy — and not military force — to stop Iran from getting a nuclear weapon, according to a recent poll from Data For Progress.

By Connor Echols
In a survey of 1,330 likely voters, 78 percent of respondents said Washington must use its best diplomatic tools to “put an immediate end to Iran’s nuclear weapons program,” while only 12 percent agreed with the statement that the United States “must go to war with Iran in order to slow down its nuclear weapons development.” (It should be noted that despite the poll’s wording, the U.S. intelligence community and the International Atomic Energy Agency have not at this time made an assessment that Iran is embarking on a nuclear weapons program.)

The poll shows a range of potentially strong messages for those who advocate a return to the Iran nuclear deal. It also indicates that, even after two years of President Joe Biden dragging his feet on a return to the accord, Americans have little appetite for alternative approaches to resolving the issue.

In a second framing of the question, 74 percent of likely voters polled said they supported a deal that would use international monitoring to stop Iran’s nuclear program from progressing. On the other side, eight percent favored military action that would set the program back “by years,” and five percent supported the current path, even if it would allow Iran to develop a weapon in the next year.

Notably, the survey showed that a slim majority (56 percent) of Republicans would support a “new agreement to limit Iran’s nuclear program,” even if that accord was based on the original deal.

If Iran does manage to develop a nuclear weapon, respondents said overwhelmingly that they would primarily blame either Biden or former President Donald Trump. Responses fell along partisan lines, with 62 percent of Democrats blaming Trump and 61 percent of Republicans putting the responsibility on Biden’s shoulders.