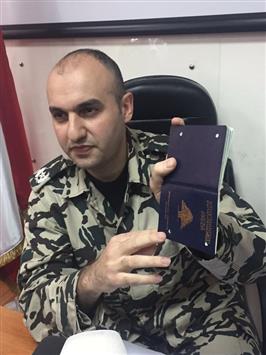 THE LEVANT NEWS — BEIRUT: General Security announced Friday that citizens would not be reimbursed for the cost of new passports, adding that the newly issued passports will not be annulled by the forthcoming biometric passports. “The problem lies with people who have renewed their passport for five years and still have a while left before it expires,” Maj. Ali Termos told a news conference. “These people can depart from Lebanon but they will be barred from entering their destination, even if they have the proper visas.”

Termos gave an example of an unfortunate Lebanese citizen who was denied entry into South Africa. “The citizen had a valid residency permit … but his passport was renewed [by hand] so he was denied entry,” Termos said.

General Security was advised by the International Aviation Organization that Nov. 24, 2015, would be the final deadline whereby handwritten passports would be accepted internationally.

Until now, when Lebanese passports are renewed the second page denoting the renewal date has been written by hand. The same applies for passports that have other travel documents attached to them.

General Security was notified of the need to change the practice at the end of 2012. Then in 2014 they issued instructions ending the practice of attaching passports together – such as in cases of parents and dependents.

A year later, old passports were no longer being renewed, instead new documents were being issued. However, the reasons that General Security only informed the public of the changes late in 2015 remains a mystery. After General Security was notified of incidents of citizens being denied entry abroad, they issued the statement asking all citizens with renewed passports and those with conjoined passports to apply for new documents.

Lebanese citizens residing abroad who believe they are affected by the changes are also advised to apply for new passports. General Security advises that they should head to the nearest Lebanese consulate or embassy and start the paperwork. Their old passport would not be withdrawn from them and they would receive the new passports in a shorter period of time than usual.

To add to the confusion, in the near future passports containing biometric information will be issued by the General Security. “When we issue the biometric passport this does not meant that the ones already in circulation would be annulled,” a security source told The Daily Star. It is only when the passport expires that individual would need to request a new one, that would then have the biometric data included.

For example, if a citizen were to now request a new, five-year passport, that passport would be valid for five years. It would not become invalid once the new biometric passports are issued.

However, the new biometric passports are not expected for some time. “[Obtaining] the biometric software and equipment is not complete but we think it should be ready by July,” Termos said during the news conference.

In order to deal with the current spike in passport requests, General Security said they would extend office opening times until 4 p.m.