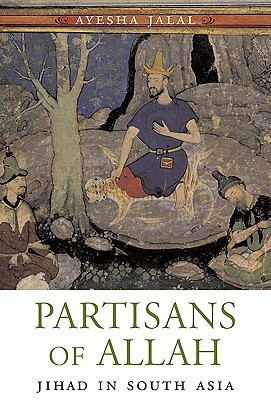 Madison (Wisc.)–With many contemporary books, I find myself merely skimming over the text.  (I think this comes from reading so much information over the computer.)  This
book, by Professor Jalal is too absorbing to do that
.
I was commissioned to do a scholarly a chapter on Jihadi websites in Orlando after presenting a paper on such.  I was encouraged to read Ayesha Jalal because her work is the latest and most authoritative learneded statement on Indian Jihadism.
Jalal goes into the fascinating South Asian history and theology of Jihad.  This is a challenging book to comprehend, but it is well worth it.
To a sincere traditional Jihadist, Sharia does not prohibit nationalistic wars.  Therefore, a Jihad is not always purely a struggle for God (Allah) [SWT]).  Thus, some temporal
rulers employ the concept against the both those who practice different forms of Islam and the non-Muslim, and, therefore, in essence these rulers along with their militaristic
entourages are imperialistic in there objectives.  Still, there are those who believe that there is an intrinsic relationship between outward physical Jihad and violent resistance
and faith in their religious concepts of personal and collective identity.
Nonetheless, Jihad has high ideals, but the tragic end to so many Jihadi fighters has led to a eulogistic and nostalgic fog concerning their actions.
Even such outstanding thinkers such as Pakistan's traditional national poet Muhammad Iqbal theorized on Jihad, but he saw Jihad in the original Arabic sense which denoted a
struggle within, or as he states in a poem:
...Jihad with death does not befit a warrior
One [who] has faith [is] alive and war[s] with himself.
Iqbal's originality gives elucidation to the love of Allah [SVT]).  Further, Muhammad Iqbal saw his poetry as an explication upon the Koran; consequently, he wrote upon his
vision of inward Jihad which found expressed in throughout his life and work.
Finally, in her study, Jalal brings Jihad into the contemporary period, and the perversion of the concept of Jihad amongst a minority of Muslims who have reinterpreted it as a
violent struggle: Equating Jihad with violence and terror makes a sheer tragedy of a concept¦ [that] remains [at] the core of Islamic ethics.
Dr. Jalal points to the lack of understanding by the counter-insurgent:  While The American-led War on Terror initially promoted a military dictator [Musharraf] in the
Islamic Republic of Pakistan while, curiously, at the same time, seeking to spread democracy in the Middle East!
Your critic considers Ayesha Jalal's study to be an essential one on the subject.  It is important reading for all Muslims -- especially here in the West  where one hears so much
erroneous claims and counter-claims on Jihadism.
Parisians of Allah is not only a book for education for Muslims, but the information presented can here help to explain the true nature of  to those outside the faith and to clarify the misrepresentation on many subjects to the non-Islamic world.