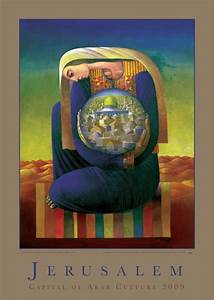 As you know, most artists develop an interest in art during their childhood and that’s what happened to me. I was good at art in school and I once won a children’s drawings competition for the United Nations when I was about 13. My family, my school and my village regarded me as an artist. When I finished school, it was as if I was brainwashed and couldn’t think of anything except art.

I studied art, but in Jerusalem there wasn’t an actual art movement. Between 1967 and 1972, there wasn’t any artistic exhibition or activity. But I met some artists in 1972 and we decided to form a group. With the occupation, we printed posters and they were confiscated. Artists were sometimes imprisoned.

When I first got the idea and did the sketch of “Jerusalem in the Heart,” it was on the occasion of Land Day. I made a nice big sketch of a woman who wasn’t embracing Jerusalem, but an olive tree. But when the time came to execute it, some incident happened that turned my attention to drawing the city of Jerusalem and not the olive tree. With time, the Dome of the Rock became a symbol of Jerusalem and later, a symbol of all of Palestine.

The woman, for me, symbolizes a number of things. During the 1970s and 1980s, she represented revolution and homeland. Another aspect is her external appearance, especially as she wears the traditional embroidered Palestinian dress, which I find very beautiful. I come from the Birzeit village and I saw how my mother and grandmother were doing a lot of the physical work at home, in the fields, and making pottery. It was all done by women. So, they have an important role in society and their symbolism isn’t meaningless but has its roots and history.

In those days when I painted a woman, I wanted to show her as a working one. I didn’t want her hands to be manicured and delicate. I wanted her to be working on the land, because she represents it. It’s not wrong to be delicate, but I wanted her hands to symbolize her strength and effort in life.

Previous Lebanese documentary wins prestigeous prize at Cannes
Next Merkel happy with Turkey on refuges, but still won’t let it into the EU