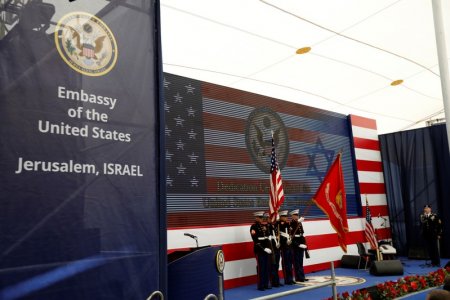 Palestinian officials today slammed the US’ decision to downgrade its Jerusalem Consulate, merging it with the US Embassy to Israel.

The Palestinian Authority (PA)’s Minister of Foreign Affairs Riyad Al-Malki condemned the US decision, saying it “proves that the US administration has adopted the agenda of the far-right Israeli settler movement, treating the entire area of historic Palestine as one political unit under Israeli control,” Wafa reported. Al-Malki continued:

[The] closing of the US Consulate General in Jerusalem, which has operated independently since in 1844, and turning it into a unit in the illegally placed American Embassy in Jerusalem, reflects the US administration’s determination to entrench its illegal embassy move and force its functions on the Palestinian side.

PLO Secretary-General Saeb Erekat also slammed the decision, arguing that “the Trump Administration is making clear that it is working together with the Israeli Government to impose Greater Israel rather than the two-state solution on the 1967 border.”

Erekat added: “To end the existence of the US Consulate therefore has nothing to do with ‘efficiency’ and a lot to do with pleasing an ideological US team [and] reward[ing] Israeli violations and crimes.”

The US State Department announced yesterday that it would merge the Jerusalem Consulate – its diplomatic mission to the Palestinians – with its embassy to Israel. US Secretary of State Mike Pompeo said the move was meant to “achieve significant efficiencies and increase our effectiveness,” adding that the merger of the two missions did not signal a change in US policy on the question of Israel-Palestine, the Times of Israel reported.

In an official press release, Pompeo added that he had “asked our Ambassador to Israel, David Friedman, to guide the merger”. The choice of Friedman to head the merger will be interpreted as a further blow to Palestinians given his ardently pro-Israel views and history of support for Israel’s policy of illegal settlement. In May Friedman came under heavy criticism for accepting an image in which Jerusalem’s iconic Dome of the Rock had been replaced by a Jewish Temple. The incident sparked outrage, with Cairo’s Al-Azhar university denouncing the it and Hamas labelling the move as incitement.

The decision to downgrade the consulate is the latest in a string of punitive measures taken by the US against the Palestinians. In May, the USA moved its Israeli embassy to Jerusalem and unilaterally declared the city Israel’s capital, drawing international condemnation and sparking widespread protests. The Trump administration has also cut funding to UNRWA and declared the right of return “off the table”. President Trump’s so-called “Deal of the Century” – the details of which have yet to be revealed – is also widely believed to be pro-Israel in character and has been shunned by key players such as Jordan and Saudi Arabia.