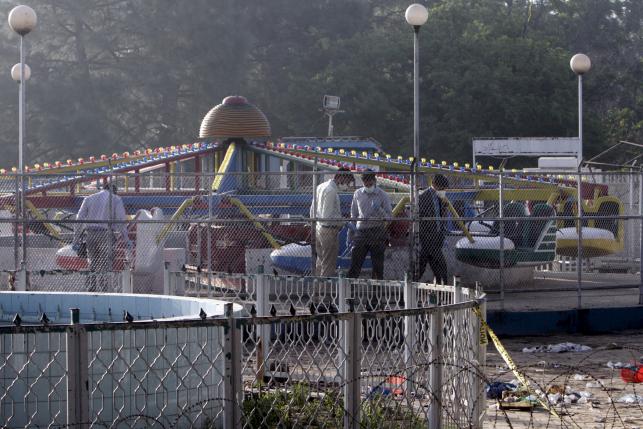 BY ASAD HASHIM for Reuters -- Pakistani authorities detained more than 5,000 suspects, then released most of them, in the two days since a suicide bomber hit a park in the eastern city of Lahore at Easter, killing at least 70 people, a provincial minister said on Tuesday.

"After further investigation we will know more about them," he said. "...If someone is found to be guilty they will be charged."

Details of the sweeping raids - aimed at anyone suspected of Islamist extremism - came as the Taliban faction claiming responsibility for the attack issued a new threat on Tuesday, singling out the media.

"Everyone will get their turn in this war, especially the slave Pakistani media," Ehsanullah Ehsan, spokesman for Jamaat-ur-Ahrar, tweeted. "We are just waiting for the appropriate time."

The Easter bombing was Pakistan's deadliest attack since a 2014 school massacre claimed by the Taliban killed 134 students. Sunday's attack, which included 29 children among the dead, showed the militants can still cause carnage despite military raids on their northwestern strongholds.

"Let Nawaz Sharif know that this war has now come to the threshold of his home," tweeted Ehsan. "The winners of this war will, God willing, be the righteous mujahideen."

Lahore is the capital of Punjab, Pakistan's richest and most populous province and Sharif's political heartland.

Sanaullah said at least 160 raids were carried out by a mixture of police, counter-terrorism and intelligence agents and confirmed that army and paramilitary forces would be used in future operations

"This operation will include all law enforcement agencies," Sanaullah said.

Military and government officials on Monday said that the military was preparing to launch a new paramilitary counter terrorism crackdown in Punjab.

The move, which has not yet been formally announced, represents the civilian government once again granting special powers to the military to fight Islamist militants.

Jamaat-ur-Ahrar, which also previously declared loyalty to Islamic State, has carried out five major attacks in Pakistan since December.

In a televised address to the nation on Monday night, Sharif vowed to continue pursuing militants.

"I am here to renew a pledge that we are keeping count of every drop of blood of our martyrs. This account is being settled, and we will not rest till it is paid," Sharif said.

The government also announced that Sharif would be cancelling a planned trip to the United States to attend the Nuclear Security Summit, due to begin on Thursday.

Pakistan's security agencies have long been accused of nurturing some Islamist militants to use for help in pursuing objectives in Afghanistan and against old rival India.

In recent years, Pakistan has cracked down on movements that target its own citizens and institutions, including the Pakistani Taliban who are fighting to topple the government and install a strict interpretation of Islamic law.