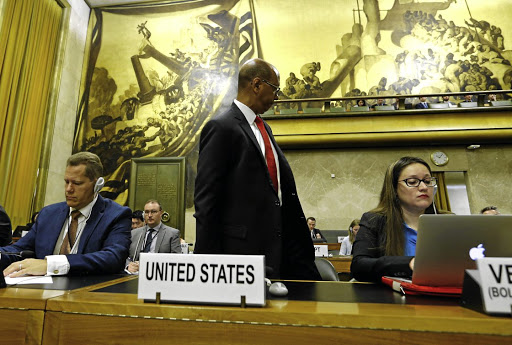 Syria has assumed the rotating presidency of the United Nations Conference on Disarmament in Geneva, which negotiated the global ban on chemical weapons.
Western governments protested the new leadership, which took effect Monday. The head of the conference changes every four weeks among UN member countries in alphabetic order.
“The Syrian regime has caused immeasurable suffering – through massive bombardment, oppression, starvation and repeated use of chemical weapons,” a German Foreign Ministry spokesman said in Berlin. “Therefore, the regime has no credibility whatsoever to carry out the presidency in a substantive and adequate manner.”

Syrian government forces are suspected of using chemical weapons several times in that country’s civil war, according to UN human rights investigators. Syria’s Geneva envoy, Hussam Eddin Ala, has denied the charges.
Ala said it was important that his country leads the conference, “despite the opposition of the US and the failure of the Israeli media campaigns that have worked in recent weeks to cast aspersions on Syria’s new role,” he told the state-run SANA news agency.
The Conference on Disarmament negotiated the 1996 global nuclear test ban and the 1997 Chemical Weapons Convention, but it has not produced any breakthroughs on the other key item on its agenda, including nuclear weapons and the peaceful use of outer space.
Robert Wood, the US disarmament envoy in Geneva, called Monday “one of the darkest days in the history of the Conference on Disarmament.”
“The (international) community must not be silent,” he wrote on Twitter.
Ala said Syria’s disarmament priorities include making the Middle East a nuclear weapon-free zone and fighting against chemical and biological terrorism.