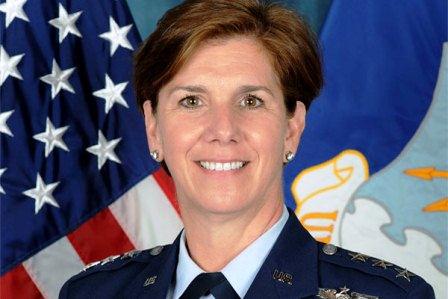 By AUSTIN WRIGHT and CONNOR O’BRIEN for POLITICO —
President Barack Obama plans to nominate Air Force Gen. Lori Robinson to be the head of U.S. Northern Command — which would make her the first woman to be named combatant commander, Defense Secretary Ash Carter announced Friday.
Robinson is now the head of Pacific Air Forces. If confirmed by the Senate, she would replace Adm. Bill Gortney, who’s been in the post since 2014.
Northern Command is one of the nation’s six regional combatant commands, tasked with helping defend the homeland. As head of a military combatant command, Robinson would be in the chain of command and answer directly to Carter.
At a POLITICO Playbook breakfast, Carter praised Robinson’s “very deep operational” and management experience.
“We have coming along now a lot of female officers who are exceptionally strong,” Carter said. “Lori certainly fits into that category.”
Carter also announced Friday that the president was nominating Army Gen. Vincent Brooks to be the commander of U.S. Forces Korea, succeeding Gen. Curtis Scaparrotti, who’s been tapped to be the next NATO Supreme Allied Commander and head of the U.S. European Command.
Brooks is now the commander of U.S. Army Pacific.
“He’s the one who has been shepherding what the Army calls Pacific Pathways, which is the Army’s ingredient in the so-called rebalance to the Asia-Pacific,” Carter said.