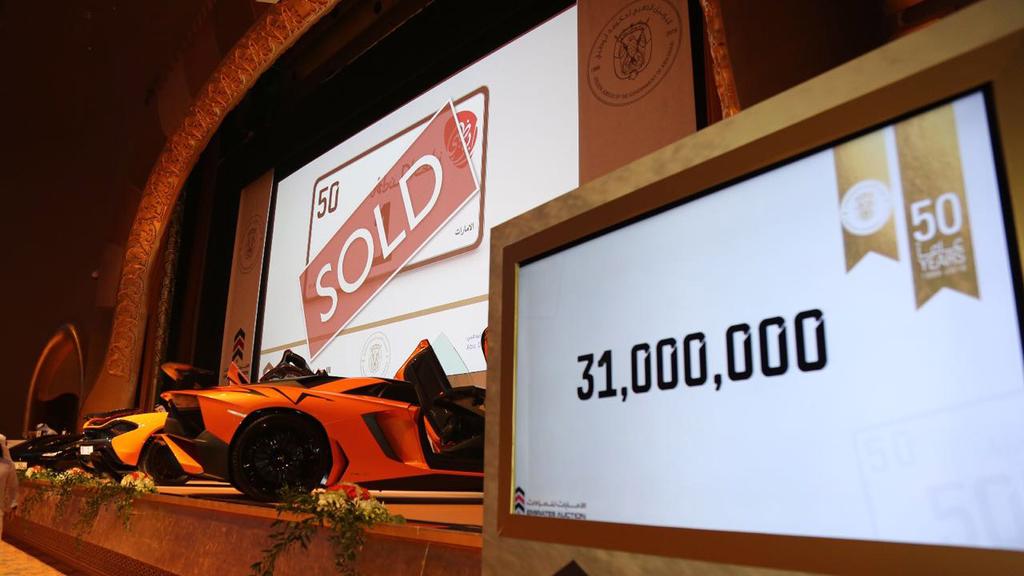 Distinguished car number plates generated millions of dirhams during an auction where plate Number 3 fetched Dh9 million in a fierce bidding on Saturday evening.
Organisers had a tough time controlling the proceedings in the charged up atmosphere. Within minutes after the bidding began, the price of the No 3 plate shot up to Dh9 million from Dh1 million.

The event held at the Jawaher Hall attracted dozens of licence plate aficionados, most of whom were Emiratis.

Along with No 3,  a total of 54 distinguished licence plates were sold, which generated  Dh25.57 million.

Meanwhile, plate number 30 fetched Dh3 million while plate number 44 fetched Dh2.15 million.
Several other plates generated hundreds of thousands of dirhams in sales, organisers said.
The bidders were required to submit a guarantee cheque which was refunded in case a number was not acquired by the participant.
Bids began anywhere between Dh5,000 to Dh1 million, depending on the licence plate.
More than 500 bidders attended the auction.
Participants who made winning bids can register the number plates in their name or transfer it to another person or an entity after fulfilling procedures of vehicle registration requirements
Major-General Saif Al Zari Al Shamsi, Commander-in-Chief of the Sharjah Police, praised Emirates Auction’s organisation of the event and expressed his joy for the amount that was raised for the “The Big Heart Foundation.”
He also expressed his thanks and gratitude for all who participated in the charity auction.

Abdulla AlMannaei, Chairman and Managing Director of Emirates Auction, congratulated the Sharjah Police Headquarters for their success and stressed the keenness of Emirates Auction to please its partners and Sharjah Police in particular.
Mariam Al Hammadi, Director of the Big Heart Foundation (TBHF), lauded the public's response to the auction, during which Sharjah Police dedicated complete proceeds from the sale of three plate numbers to support TBHF's humanitarian work worldwide.
The birth of this kind of selfless humanism, she said, is the result of the vision and direction offered to us by Her Highness Shaikha Jawaher bint Mohammad Al Qasimi, Wife of His Highness the Ruler of Sharjah, Chairperson of TBHF and UNHCR Eminent Advocate for Refugee Children.
Al Hammadi underlined that the initiative is the first fruit of TBHF's strategic collaboration with the Sharjah Police, which was materialised in the signing of a Memorandum of Understanding between the two parties recently. Expressing TBHF's deepest gratitude to Sharjah Police and to Emirates Auction for organising the event, she stressed that local and global collaborations are key to ensuring that TBHF expands its scope of operations to benefit larger sections of society.
She said that the funds raised through this auction will go into supporting and empowering children and the youth in regions affected by turmoil and disasters.