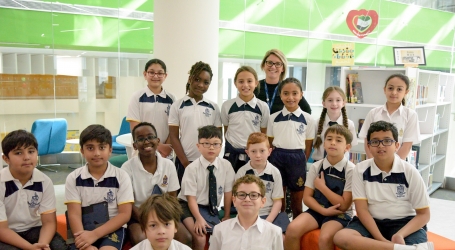 The principal of Repton School Abu Dhabi said school fees have not increased since its inception in Abu Dhabi and are not expected to increase in the near future.
“Our primary section has been open for five years and we have not increased our fees even once. And to support the community further, we hope to eventually introduce scholarship programmes,” Robert Relton, school principal, told Gulf News.

He was speaking at the official opening of the school’s new campus on Abu Dhabi’s Reem Island, which can accommodate up to 1,800 students.
The 25,000-square-metre facility currently houses students enrolled from Grades 3 to 6, while the school’s Rose campus caters to more than 500 students from Kindergarten to Grade 2.
With the opening of the new campus, the school, which offers the English National Curriculum, is expected to provide seats in Grades 7 to 9 from the 2018-2019 academic year.

Its fees currently range from Dh55,000 to Dh74,000 annually, and Repton School Abu Dhabi is one of a handful of more than 180 private schools in Abu Dhabi emirate not to have sought fee hikes. In contrast, 24 schools increased their fees by three per cent on average at the start of the current academic year, and 51 others hiked fees by six per cent on average in 2016-2017.
Apart from a focus on academic achievement, what sets Repton School Abu Dhabi apart is the way it incorporates technology to drive learning outcomes, the principal asserted.
“We provide an iPad free of cost to every child who enrols at the school, and use these tablets to facilitate teaching and discussion,” Relton explained.
The school’s Rose campus has recently been dogged by complaints of disruptive construction noise from the adjoining site, but Relton confirmed that the developers have agreed to halt construction activities during the daytime.
“The developers agreed verbally to restrict construction to the night hours last week, and we have now had the agreement stamped,” he said.