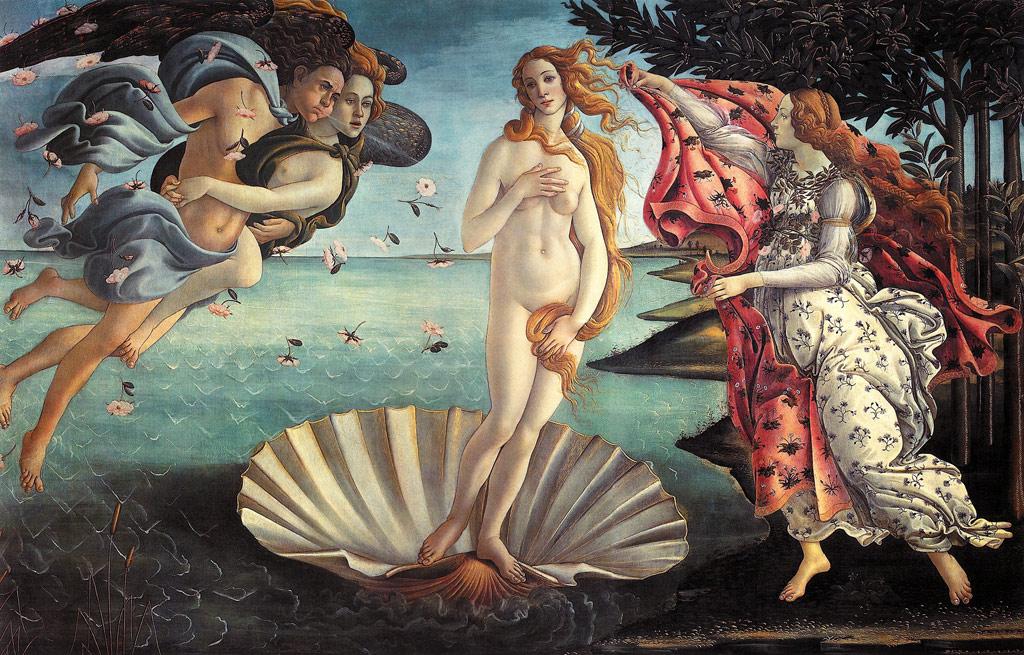 Image credits: Birth of Venus, also called “Venus on the Half Shell” by Sandro Botticelli.

Not so long ago, right before the summer kicked in media guy and talented writer Talal Chami joined the editorial team of The Levant News. After the successful launch of Talal’s Corner, LEAVE-IT-ALL-BEHIND-FOR-A-LIFE-OF-SUNDAYS, it is time to turn the page for yet another adventure: P-I-C-K---M-E---U-P---@---G-R-E-E-N---S-U-P-R-E-M-E- -V-o-l-.2.

By Arthur Blok
Chami, a Lebanese - Colombian who moved back to Lebanon in the early 80s, has been working on his blog: The Axles Of My Wagon Wheels. He describes himself as a 'Poet, actor, and someone who 'love's psychology. Put these three things together, and you get someone seeking to say something; Bur is not mistaken.

Chami is not your ordinary media guy. The actor and poet is a published author, fiction and non-fiction bloggers, and researchers. He published two non-fiction and one fiction novel. Since July 1, some of the best stories from his blog will be co-published here. His first story LEAVE-IT-ALL-BEHIND-FOR-A-LIFE-OF-SUNDAYS was published in three separate parts: Part I, Part II, and Part III.

In the first contribution, we saw the main character, a sex-obsessed guy suffering from a wide array of traumatic circumstances in the Lebanese Civil War.

A leading character that does not want to under-react. Someone who wants to react adequately gets involved in the war but in his way. An somehow more evil version of Chami himself now, but then in the mid-seventies.

I can’t overlook that her strawless lid was once snipped by a randy horn-eyed ghost crab, confusing her fleshy bits for an open oyster on the beach, even though it was illegal to lie down there naked—a foolish act.

Talal Chami
The truth is, some of her intimate friends were woken up by her screaming that something’ had bit her, and they were shocked to see a crab hanging off her privates. A morbid-act.  They had no choice but to release the pinchers and free her from his grip. The recollection of that sinister incident turned me on every time she narrated it. Lustful and lecherous.  Her secret weapon was the knockout garlic-herb butter she used to brush each oyster, arranged in a single layer on the grill. And subsequently, cook uncovered for seven minutes or at least until the edges curl. The truth is that eating oysters and sex merged well—a magic twist. I guess the oyster’s salty juice and soft flesh had the power to excite.  In eating oysters and sex, one used all five senses just for kicks. Casanova was so proper to fuel up with oysters before his lusty bedroom undertakings. Chiquita loved to cook oysters for me, and she went randy when we cooked oysters together on Sunday afternoons.
A sexy-act. A night involving lubricants and oysters was a weekend thrill. I love oysters.  She said.  It’s like kissing the sea on the lips. Casanova puts it like this: I put the shell in her mouth; I told her to suck in the liquid and keep the oyster between her lips. After laughing heartily, she performed the feat to the letter, and I took the oyster by pressing my lips to hers with the most extraordinary decency. They delighted her, so I took the oyster from her lips.
I was a randy horn-eyed ghost crab on the look-o for thrill-driven affairs round the clock.  Beirut was a massive bed of lust and smoke, and violence. A tower of sexual escapades and rendezvous. She used to sleep on her side, naked. I used to sleep on my back, full of sperms.  She was an open and naked oyster on the beach of my waterbed, and I was a randy, horny ghost crab on her oyster-resembling genitalia:  The flavorsome local white wine added the ultimate aroma to our scrumptious encounter.  I once read that the Greeks believed that semen was white because it was made of foam.  Semen was similar to the salty foam of the ocean.

Add to this the belief that the soft milky texture of oysters was like semen, and thus eating them would generate more semen in a male.  The legend goes that Cronos, Zeus’ father, overthrew his own –Uranus. It was a brutal fight.  In the end, Cronos chopped his father’s bacon bazooka off with his sickle. Everywhere Uranus’s golden blood landed, new organisms appeared.  Blood on the rocks turned into winged demons called Furies, and blood on fertile soil turned into nymphs and satyrs. Cronos threw the bacon bazooka into the ocean.  Sperm came out of it and made foam.  The foam, in turn, mixed with the sea and created none other but Aphrodite.
A truly-macabre. Botticelli’s Birth of Venus painting shows her arriving in Cyprus in a giant shell. The connection between shellfish and Aphrodite is more than evident. A grim and comevidentted-plot. A la Giacomo Casanova. The famous lover ate at least fifty slippery oysters a day and used assurance caps to prevent the impregnation of his mistresses.  I didn’t. Words of love must be implied. He used to say.  Not boldly proclaimed. I never used words. My bacon bazooka needed no introduction. He was a man of far-ranging intellect and curiosity. A true adventurer, traveling across Europe from end to end in search of fortune.  He was a lawyer, clergyman, military officer, violinist, con man, pimp, gourmand, dancer, businessman, diplomat, spy, politician, mathematician, social philosopher, playwright, and writer. I, on the other hand, was a fucker on the run. An android-lover on the loose. A sybarite is seeking the perpetual euphoria of a new fuck-affair, every time.  And always looking for Chiquitas around the city-bed of lust, smoke, and violence.

She looked me in the eyes and said: Eat your oysters naked first….

To continue reading this adventure, visit The Axles of my Wagon Wheels by Talal Chami here.

Tags:
Arthur Blok, Casanova, Chiquita, Condoms and Casenova, I love oysters, leave it all behind for a life of Sundays, Lebanese blogger, Lebanese Colombian, Oysters, Pick me up Green Supreme Vol 2, Talal Chami, The Axles of my Wagon Wheels, The Lebanese Civil War

By Talal Chami - 1 month ago
Not so long ago, right before the summer kicked in media guy and talented writer Talal Chami joined the editorial team of The Levant News. After the successful launch of Talal’s Corner, LEAVE-IT-ALL-BEHIND-FOR-A-LIFE-OF-SUNDAYS, it is time to turn the page for yet another adventure: P-I-C-K---M-E---U-P---@---G-R-E-E-N---S-U-P-R-E-M-E- -V-o-l-.2. By Arthur BlokChami, a Lebanese - Colombian who moved back […]
Read story

By Talal Chami - 2 months ago
Pride is the best way to describe the moment when the Colombian Ambassador to Lebanon, Fernando Hello, officially inaugurated the 20 July Celebration for the National Day of Independence. Being a Lebanese-born Colombian, I was overwhelmed by the avid crowd of high-ranking Lebanese officials, diplomats, and other influential people who were summoned to a night […]
Read story

By Talal Chami - 3 months ago
The-Yo-Yo-Affair-Or-A-Crew-Of-Six-Unemployed-Friends-Decide-to-Run-A-Shag-Xpress-with-A-Rear-Hatch-For-BJs-In-Beirut-1979 A-SHORT-LOOP-IN-ONE-ACT By Talal Chami -PART I- She hated Jazz but budged in the middle of a fuck.  She would turn the volume up and tell me that the music drove her nuts.  Little did I know, back then, that that cigarette would plunge upon the bubbling sidewalk that afternoon, like a zeppelin in flames, […]
Read story