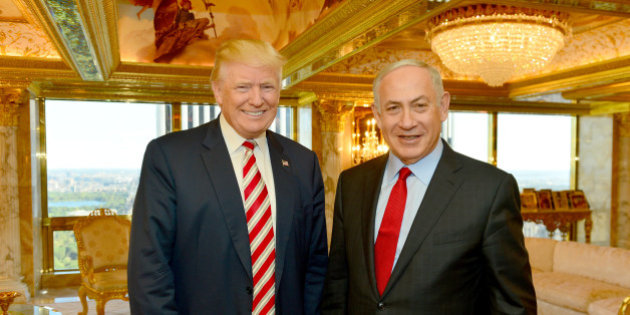 Israeli Prime Minister Benjamin Netanyahu hailed Israel’s “irreplaceable” relationship with the United States in his first public remarks after the Trump administration said it would move the U.S. Embassy to Jerusalem, but he did not address the move directly and instead stressed the threat of Iran.

Netanyahu lauded Israel’s expanding relations with the world as he spoke at a diplomatic conference in Jerusalem, describing a “tsunami of diplomatic, economic, security and technology ties.” However, he said relationships being built with the Arab world could not be fully realized until an agreement is reached on Palestinian territories, and he called on nations around the world to do more to counter expanding Iranian influence.

A spokesman said he is waiting until after the official announcement to comment.

President Trump is expected recognize Jerusalem as Israel’s capital in a speech later Wednesday and order the relocation of the embassy there, according to senior aides.

While the move has been publicly welcomed by many Israeli politicians, it has the potential to unsettle Israel’s warming relations with Sunni Arab nations at a time when they share an interest in countering the perceived threat of Iranian expansion in the region — as well as spark protests and torpedo the White House’s nascent peace efforts. Palestinian officials have reacted with anger, and Trump’s plans have triggered bleak warnings from Middle Eastern nations that say the move would be detrimental to peace and the region’s stability.

The move would shift decades of U.S. policy, going against an international consensus that the status of the city should be decided in a peace agreement between Israelis and Palestinians.

Other members of Netanyahu’s coalition government at the event welcomed the move.

“The recognition by the U.S. and other countries will make clear to Palestinians that they must accept the existence of Israel and must conduct real negotiations of peace with Israel,” said Intelligence Minister Israel Katz. “We expect the international community to accept Trump’s decision.”

“Israel is duty bound to express its satisfaction and joy, and, yes, this is their capital and they want this recognition,” said Yossi Mekelberg, a Middle East expert at the Britain-based Chatham House. “But they also know it can cause some trouble and will create reaction, mostly negative. How negative? That’s the question.”

While Arab nations have expressed public discontent, they may decide that their shared interests with the United States and Israel are too strategically important to genuinely jeopardize. Still, the moving of the embassy is not necessarily a priority for Israel, he said.

“They can’t say no, obviously, but I sense that quietly a few people are thinking, thanks but no thanks,” Mekelberg said.

In an attempt to lobby against the move, Palestinian President Mahmoud Abbas has called world leaders, including Pope Francis, Russian President Vladimir Putin and Chinese President Xi Jinping, according to one of his aides.

But Trump appears set on fulfilling his campaign promise, regardless of the regional consequences.

Turkish Prime Minister Binali Yildirim said Wednesday that the U.S. plan to recognize Jerusalem as Israel’s capital is “unlawful” and could bring “irreversible consequences” in the region.

Also Wednesday, Iran’s supreme leader, Ayatollah Ali Khamenei, slammed the decision on Twitter, saying it was taken “out of despair and debility.”

Before meeting Wednesday with Secretary of State Rex Tillerson at NATO headquarters in Brussels, Turkish Foreign Minister Mevlut Cavusoglu said it would be a “grave mistake” to recognize Jerusalem as Israel’s capital and move the U.S. Embassy.

“It will not bring any stability or peace, but rather chaos and instability,” he said. “Not only [in] the Muslim world. The whole world is reacting, and the whole world is against the possibility of this decision.”

Cavusoglu said he had already told Tillerson this, “and I will tell him again.”

His comments came one day after Turkey’s president, Recep Tayyip Erdogan, said Jerusalem is a “red line” for the Muslim world and threatened to cut ties with Israel.

“Jerusalem is a very delicate subject in the world of Islam,” Yildirim said at a news conference in the South Korean capital, Seoul, the state-run Anadolu news agency reported.

“Wrong steps in this direction would bring irreversible consequences,” he said, adding that such a move could “bring a new conflict between religions.”

The Egyptian, Saudi and Jordanian governments all released statements on Tuesday warning of the consequences of the decision after their leaders spoke with Trump.