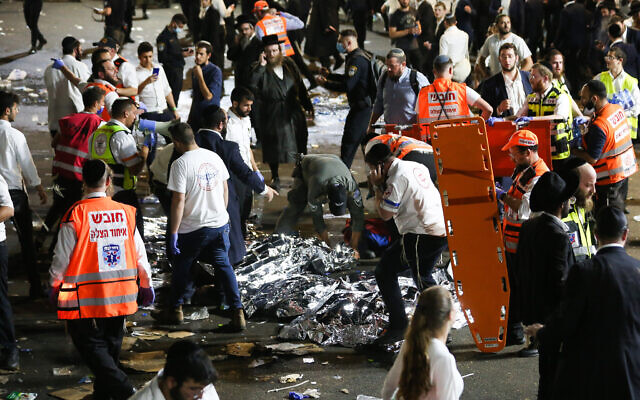 Netanyahu defends himself against religious stampede, deaths during his reign

Former Israeli Prime Minister Benjamin Netanyahu testified on Thursday that he bears no responsibility for the safety gaps that led to a deadly stampede that killed 45 people last year.

The incident, which was the worst civilian disaster in the country's history, took place on Mount Meron in northern Israel during a Jewish festival in April 2021. Around 100,000 worshipers, mostly ultra-Orthodox Jews, attended festivities despite coronavirus regulations limiting outdoor assemblies to 500 people, and in spite of longstanding warnings about the safety of the site.

"I didn't deal with safety," Netanyahu testified to an independent commission investigating the tragedy, saying he only stepped in because of the coronavirus pandemic. As for other safety gaps or measures, he said, "The prime minister doesn't deal with that."

The independent commission of inquiry launched after the disaster last year is investigating major safety lapses and overcrowding at the mountaintop site and has recommended limiting attendance and revamping safety protocols and infrastructure.

In his testimony to the state commission, Netanyahu said that ordinarily the prime minister is not involved in preparations for annual celebrations at Meron, but he said he weighed in due to the coronavirus pandemic restrictions in place at the time.

"I did more than my predecessors to deal with the issues," Netanyahu said, when pressed about warnings there were gaps in safety regulations before the event.

In last year's incident, hundreds of people bottlenecked in a narrow passageway descending the mountain, and a slippery slope caused people to stumble and fall. The resulting human avalanche killed 45 people and injured at least 150.

The site is believed to be the burial place of prominent second century sage Rabbi Shimon Bar Yochai. The annual springtime celebrations are marked by the lighting of large bonfires, singing and dancing.

Netanyahu is currently leader of the opposition and hopes to regain the premiership as Israel heads into another election cycle, what will be the country's fifth election in just under four years.