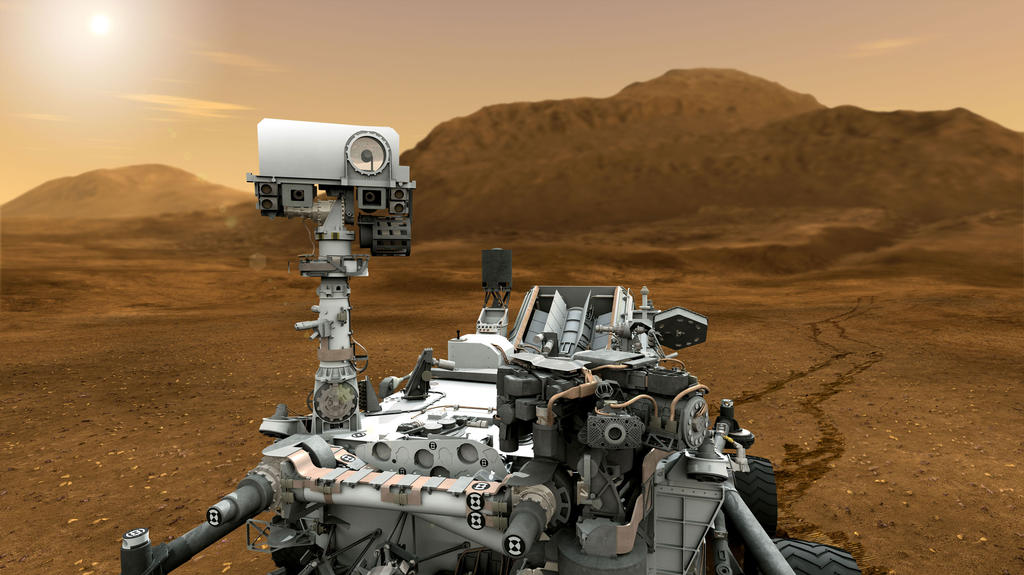 For the first time, scientists say they have clear evidence that the chemical building blocks of life exist on Mars.

What they can't say yet is whether there is, or ever was, life on the Red Planet.

The new evidence comes from a pair of rocks. NASA's six-wheeled Curiosity rover drilled into the planet in late 2014 and early 2015. The two rock samples, from sites named Confidence Hills and Mojave, are at the bottom of Gale Crater.

Powder from the rocks went into an analyzer on the rover called SAM that can determine what they were made of.

But the SAM results were hard to interpret — there were a lot of extraneous signals that didn't make any sense. So NASA astrobiologist Jennifer Eigenbrode at the Goddard Space Flight Center spent the intervening years figuring out which signals were clearly junk and removing them.

Then she looked at the analyzer results again. "There were signals there that were telling us that we had detected certain types of organic molecules," she says. Organic molecules contain carbon, the chemical element central to life.

That raises the obvious question: Where did the carbon come from?

"It could have been from meteorites," she says. Meteorites are constant pummeling Mars, and many of them contain carbon.

"It could be from rock processes," processes that have been going on during the billions of years since Mars formed.

And then there's the most intriguing possibility. Eigenbrode says the analyzed rocks came from the bottom of what was once a lake at a time when Mars was a much warmer, wetter place.

"Because this lake had everything that organisms needed to be happy, maybe there was life in the lake," she says. If there was, then that life would have left behind organic molecules when it decayed.

Penn State astrobiologist Kate Freeman agrees the new evidence makes that interpretation possible, but "it's not standing up and waving a flag and saying, 'I'm life.' "

She isn't ruling out that possibility, however.

"I don't believe there's life on Mars at the present," Freeman says, because Mars is very dry, very cold and lacks much of an atmosphere. "Whether there was in the past or not is certainly an open question."

"There's a new mission in the planning where they'll be able to drill much deeper than the Curiosity rover can," Freeman says. "That gives me great hope because we can perhaps get past these surface environments that are so harsh and maybe [go] a little deeper and find better-preserved materials."

In addition to finding organic molecules in the rocks in Gale Crater, rover scientists are reporting another intriguing finding.

The rover has been seeing seasonal changes in the amount of methane in the Martian atmosphere. Methane is another organic molecule.

"We were kind of shocked to see that with the seasons, the signal changes by a factor of three, which is a huge change and completely unexpected," says Chris Webster, a rover scientist at NASA's Jet Propulsion Laboratory.

He and his colleagues think the methane is coming from underground.

"It's coming from sub-surface reservoirs" and then seeping up to the surface, Webster says.

"Once it's on the surface, the temperature on the surface regulates the way in which it holds on to the methane through 'stickiness,' or surface adsorption as we call it," he says. "So it holds it in the winter time and releases it in the summertime as temperatures get warmer."

Webster says the rover results don't say whether the methane being released has been trapped for eons or is being generated now.

The results also don't indicate whether the methane is being created by chemical processes involving rocks alone, or whether some living or formerly living bacteria generated it.

Clearly, there are more questions about Mars that need answering.

The studies on methane and on organic molecules were published Thursday in the journal Science.