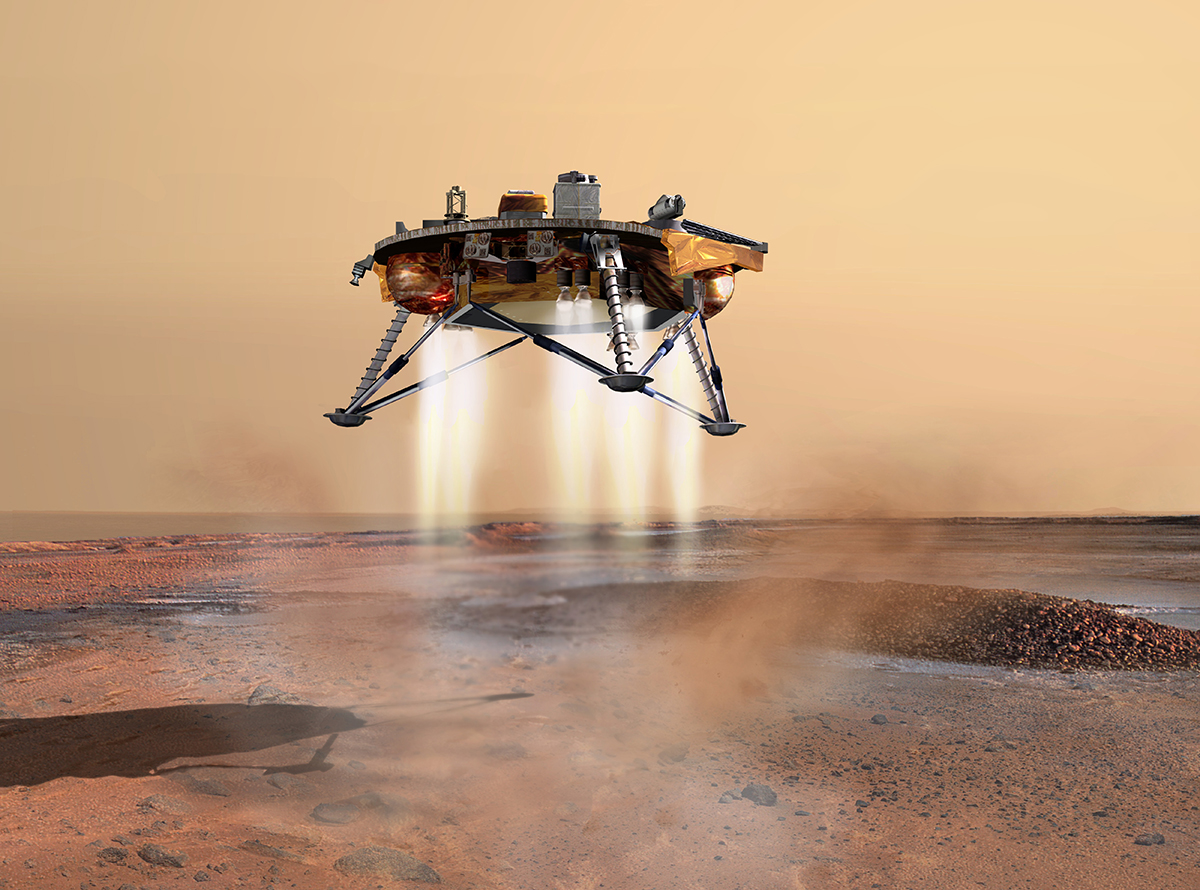 In a first for the West Coast, an Atlas 5 rocket boosted a robotic Mars lander into space Saturday, the first step in a 171-day voyage to the red planet for a two-year, $1 billion mission to monitor marsquakes, probe the temperature of the core and map the planet's hidden interior.

It was the first interplanetary launch from the West Coast, but fog blocked the view for spectators near the launch site as the rocket climbed away to the south over the Pacific Ocean. Long-range cameras, however, captured spectacular views as the rocket streaked away, trailing a brilliant plume of fiery exhaust.

The Atlas 5 did its job despite the fog -- a visibility guideline was waived by mission managers with all other systems "go" for flight -- and 13 minutes after liftoff, the rocket's Centaur second stage completed the first of two firings to put NASA's InSight Mars lander in a temporary parking orbit.

The InSight lander is the first spacecraft devoted solely to studying the interior of Mars. In this artist's impression, two of the lander's primary instruments -- a sensitive seismometer with a dome-shaped weather shield and a sub-surface heat probe can be seen deployed on the surface. NASA
A second burn a little more than an hour later was planned to boost the spacecraft out of Earth's gravitational clutches, putting InSight onto a trajectory to Mars. If all goes well, the lander will touch down on a broad plain known as Elysium Palitia around 2 p.m. local time on Nov. 26.

InSight is the eighth lander NASA has sent to Mars. Since 1964, the United States has now launched 23 robotic spacecraft to the red planet at a cost of more than $20 billion in an evolving campaign to map out the red planet's surface, determine the role of water in its history and to search for signs of past habitability and the organic building blocks of life.

InSight is the first mission dedicated solely to learning more about the planet's interior in an attempt to glean clues about how rocky terrestrial planets like Earth formed during the birth of the solar system 4.5 billion years ago.

"The goal of InSight is nothing less than to better understand the birth of the Earth, the birth of the planet we live on, and we're going to do that by going to Mars," said Bruce Banerdt, principal investigator of the Interior Exploration using Seismic Investigations, Geodesy and Heat Transport -- InSight -- mission.

"How we get from a ball of featureless rock into a planet that may or may not support life is a key question," he said.

Earth is a very geologically active world, and much of the early record has been destroyed by continental drift and the churning of the mantle. As a result, "we're kind of at a loss to see, on the Earth, what's the evidence for what happened in those early years," Banerdt said.

"But we can go to Mars. Mars is a smaller planet, it is less active than the Earth, and so it has retained the fingerprints of those early processes in its basic structure -- the thickness of the crust, the composition of the mantle, the size and composition of its core.

"And by mapping out these boundaries, these various different sections of the inside of the planet, we can then understand better how the planet formed and how our planet got to be the way it is."

After a detailed photo survey of the surrounding terrain near the lander and repeated rehearsals on Earth, a robot arm on InSight's upper deck will be commanded to pick up both instruments and lower them to the surface.

The instrument, protected by the elements by a down-shaped shield, is capable of measuring movements smaller than the width of a hydrogen atom. As seismic waves from marsquakes travel through the martian interior, they will pass through different types of rock and soil that will alter their shape.

The InSight Mars lander, with its circular solar arrays deployed, during pre-flight testing. The seismometer's weather shield can be seen on the upper deck. NASA
"Scientists understand how to take the shapes of those wiggles, their frequency, their amplitude, the polarization, the timing, all kinds of properties of those waves and pull that information out and finally, after we've gotten many, many marsquakes from different directions, we can put together a three-dimensional view of the inside of Mars," Banerdt said.

The heat probe will use a motor and spring-driven hammer mechanism to pound its way down into the martian soil trailing a cable with sensitive temperature sensors. Pausing along the way to measure the thermal conductivity of the soil at different points, the probe could reach a maximum depth of about 15 feet.

The sensors on the trailing cable will measure slight differences in temperature between the surface and the probe's maximum depth, allowing scientists to extrapolate temperatures all the way to the core 2,000 miles below.

InSight's third investigation relies on the lander's radio system. By carefully analyzing slight changes in the radio signals from the spacecraft as Mars rotates on its axis and sweeps along its orbit, scientists can precisely locate the martian polar axis and measure how it slowly changes orientation.

"Over the course of a year, we can watch that north pole wobble just a little bit because of the core sloshing around inside the planet," Banerdt said. "And that will give us a very, very tight constraint on the size of that core, its density and so its composition."