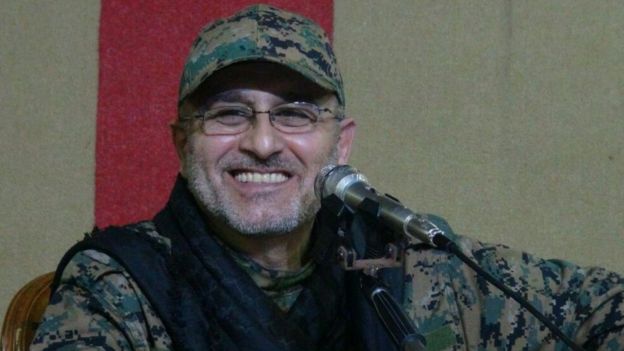 Mustafa Badreddine Is Killed in Syria by Takfiris

By ANNE BARNARD and SEWELL CHANMAY for New York Times —

Mustafa Amine Badreddine died in a “huge blast” near the Damascus airport, the group’s television network said. Credit Hezbollah, via Associated Press
BEIRUT, Lebanon — In his more than three-decade career as a militant operative, Mustafa Amine Badreddine embraced an array of real and assumed identities — bomber, playboy, commander — evolving along with Hezbollah, the Lebanese Shiite organization he helped to create.

He was accused of having helped plan the truck bombing that killed 241 United States Marines in Beirut in 1982, introducing the world to the militant guerrilla network that would later become Hezbollah.

Hijackers acting on Mr. Badreddine’s behalf repeatedly demanded his release from a Kuwaiti prison, but he escaped with the help of Saddam Hussein’s 1991 invasion. He built a reputation for partying in the Lebanese coastal casino town of Jounieh, and was accused of having plotted far-ranging attacks. They included one of the most brazen assassinations, that of Lebanon’s former prime minister, Rafik Hariri, on a seaside Beirut boulevard.

When Mr. Badreddine, 55, was killed this week in “a huge explosion” near Damascus, the Syrian capital, as Hezbollah confirmed on Friday, he had moved on yet again. Mr. Badreddine was Hezbollah’s top military commander and had been leading its expanding operation in Syria.

That made him central to Hezbollah’s most recent transformation, from a movement built to battle Israeli troops on Lebanese soil to an expeditionary force attempting to intervene decisively in a neighboring country.

His death, considered its biggest leadership loss in years, raises many questions central to the Syria war, the region and the future of Hezbollah, Lebanon’s most powerful military and political organization.

Among them are whether the operation in Syria has strained Hezbollah, making it more vulnerable to attack and subversion; whether Hezbollah will retaliate against Israel if it concludes the Israelis were responsible for the death; and whether the loss of Mr. Badreddine will blunt Hezbollah’s effectiveness inside Syria

The most immediate question is who was behind his death. Hezbollah’s Syrian intervention has created new enemies by helping keep President Bashar al-Assad in power through five years of war with rebel and militant Islamist groups seeking to topple him.

“Before, with an operation like this, you would jump straight to Israel. Now, you can’t,” said Ali Rizk, a Lebanese political analyst close to Hezbollah.

He enumerated possible killers including Saudi Arabia and a range of insurgent groups it supports inside Syria, any of which, Mr. Rizk said, could have collaborated with Israel.

Mr. Assad is a close ally of Iran, a partnership that has long provided a conduit to supply Hezbollah with weapons to battle Israel. Now, Hezbollah is the most powerful of several Iran-backed Shiite paramilitary groups that, along with Iranian forces, are playing an ever more prominent role on the battlefield in Syria.

The Syria war has changed Hezbollah’s position in the region. It was once lauded in Lebanon and the Arab world, by Sunnis and Shiites, as the heroic resistance to Israeli aggression.

Now, Hezbollah’s role in Syria has divided Lebanon and the Arab world — roughly, though not entirely, along sectarian lines. Those who view Mr. Assad as a brutal dictator see Hezbollah as an enabler of his effort to crush an insurgency led by the country’s Sunni majority.

Hezbollah’s Al Manar television network, which reported Mr. Badreddine’s death, said he had been targeted in a “huge blast” near the Damascus airport, and that several Hezbollah fighters had been wounded.

Hezbollah did not immediately point a finger at Israel, saying that it was investigating whether the blast was from an airstrike, rocket attack or other cause.

At a funeral on Friday in southern Beirut, where crowds lined the streets and tossed flowers toward Mr. Badreddine’s flag-draped coffin, Hezbollah leaders said that they would soon announce conclusions about the perpetrators.

The Israeli prime minister’s office declined to comment, as did the Israel Defense Forces and the Israeli Foreign Ministry.

An American-led military coalition has been conducting airstrikes in Syria for nearly two years aimed at hitting the Islamic State extremist group, while Russia, Mr. Assad’s ally, has been bombing his rebel adversaries since September.

The White House spokesman, Josh Earnest, told reporters in Washington on Friday that “no aircraft from the U.S.-led coalition” had been in the area where Mr. Badreddine was reported killed.

Some analysts have floated the possibility of a Hezbollah internal rift over policy in Syria, or the idea that Mr. Badreddine had been killed in fierce battles with insurgents in northern Syria, which also may have killed some Iranian fighters.

Regardless, these analysts said, it remained crucial for members of Hezbollah’s hierarchy to portray the battle in Syria as an extension of their anti-Israel objectives.

“For them it’s the same, fighting in Syria or fighting Israel,” said Haytham Mouzahem, a Lebanese political analyst who studies Hezbollah.

A Hezbollah official, Hussein Haj Hassan, reiterated that idea, telling Al Manar that Mr. Badreddine had been in the vanguard against what he described as an alliance of Israel, the United States and takfiris, a derogatory term for extremist Sunni militants who often regard other Muslims as apostates.

Some extremist Sunni groups operating in Syria, like the Islamic State and the Nusra Front, apply the apostate label to Shiites, who make up Hezbollah’s base and form a majority of the population of Iran, a Shiite theocracy.

Mr. Badreddine was one of four people being tried in absentia for the 2005 assassination Mr. Hariri, in a suicide bombing that killed him and 22 others. The trial is being held by a special United Nations-backed tribunal near The Hague. A wealthy businessman, Mr. Hariri was Lebanon’s most prominent politician after a 15-year civil war ended in 1990 with a power-sharing agreement.

Hezbollah has denied involvement in Mr. Hariri’s assassination and said that the charges were politically motivated. The indictments of Mr. Badreddine and other Hezbollah members were handed down in 2011 by the tribunal, which acknowledged that it was relying largely on circumstantial evidence.

The killing of Mr. Badreddine was the greatest leadership blow to Hezbollah since the 2008 assassination of Imad Mugniyah, his brother-in-law. Mr. Mugniyah, killed in a Damascus bombing, was regarded as a key organizer of the 1983 bombing of the American Marine barracks in Beirut, and other spectacular acts of violence.

After that, Mr. Badreddine, known among the organization’s ranks as Zulfiqar, became its top military commander and an adviser to the leader, Hassan Nasrallah.

A shadowy expert in explosives, Mr. Badreddine used numerous aliases, including Elias Saab and Sami Issa. Until his death, the only widely circulated image of him was decades old, a black-and-white photograph showing a much younger man, wearing a suit. Hezbollah, in confirming the death, released a new image in military attire.

Mr. Badreddine was suspected of involvement in the deadly 1983 bombings of the American and French Embassies in Kuwait. He was detained and sentenced to death in Kuwait, and he was imprisoned for years until he fled prison in 1990, when Iraq, under President Saddam Hussein, invaded Kuwait.

Ron Ben-Yishai, an Israeli military analyst, wrote on the news site Ynet that Mr. Badreddine had many enemies. Israel, for example, suspected that he had played a role in the 1992 attack on the Israeli Embassy in Buenos Aires and a 2012 attack on a tourist bus in Bulgaria, in which five Israelis were killed.

But Mr. Ben-Yishai expressed doubt that Israel was responsible for the killing. “Israel as a state does not settle accounts, but rather thwarts future threats,” Mr. Ben-Yishai wrote, adding that Mr. Badreddine “was more of a threat to the rebels in Syria and Lebanon than he was to Israel.”

Mr. Ben-Yishai wrote: “That is why it can be assumed with much certainty that the background to his assassination was internal Lebanese conflicts.”

Over the past 30 years, Israel has killed some of Hezbollah’s top leaders. In 1992, Israeli helicopter gunships ambushed the motorcade of Mr. Nasrallah’s predecessor, Sheik Abbas Musawi, killing him, his wife and son, and four bodyguards. Eight years earlier, another Hezbollah leader, Sheik Ragheb Harb, was gunned down in southern Lebanon.

The Arab League designated Hezbollah a terrorist organization in March, and shortly after, Saudi Arabia cut $4 billion in aid to Lebanese security forces, after the Lebanese government declined to join resolutions critical of Iran and Hezbollah. Saudi Arabia and other predominantly Sunni Persian Gulf states have also cut Lebanese satellite broadcasts, expelled Lebanese expatriates they say have ties to Hezbollah and warned their citizens against traveling to Lebanon.