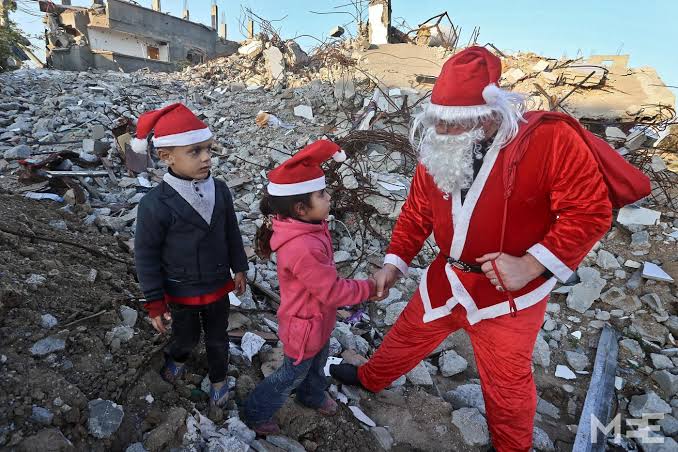 Muslim women in the Palestinian Gaza Strip have been hand-crafting gifts for the approaching Orthodox Christmas as part of a project to empower a traditional community.

Their Santa Claus dolls, toy Christmas trees and red-and-white puppets come into high demand over the holiday season in Gaza, Bethlehem and Italy.

Though most of Gaza’s 2 million population are Muslim, around 1,000 are Christian, mostly Greek Orthodox, who celebrate Christmas on Jan. 7.

“Our prophet encouraged us to respect all religions and we like to join with them in celebrating their day,” said the group’s product designer Laila Tayeh.

Tayeh and colleagues are part of the Zaina Cooperative Association, working in a Gaza community that often restricts women’s movement outside the home.

Haneen Alsammak, the association’s executive manager, said the project had given women training in carpentry and tailoring, and enabled them to leave their homes to work and spread some Christmas cheer.

“This is a message of love toward Christians inside and outside Gaza,” she said.

Gaza is run by the Islamist Hamas movement, which is designated a terrorist group by the West and neighboring Israel against which it has fought three wars in the past decade.

Citing security reasons, Israel restricts movement in and out of Gaza and maintains a naval blockade of the coastal strip where the economy suffers from high unemployment and poverty.

In 2018, only 26% of Gaza women participated in the workforce, according to the Palestinian Central Bureau of Statistics.

Tags:
Bethlehem and Italy., Muslim women in the Palestinian Gaza Strip have been hand-crafting gifts for the approaching Orthodox Christmas as part of a project to empower a traditional community. Their Santa Claus dolls, toy Christmas trees and red-and-white puppets come into high demand over the holiday season in Gaza