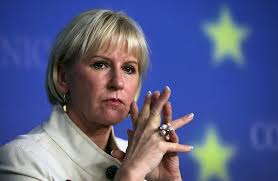 Morocco has praised Sweden’s decision not to recognise Western Sahara as an independent state, following months of diplomatic tensions over the Swedish stance on the disputed territory.

“Sweden’s decision not to recognise the so-called Sahrawi Arab Democratic Republic [SADR] complies with international law and is consistent with the UN-brokered political process”, Morocco’s ministry of foreign affairs and cooperation said in a statement on Friday.

“It aims to achieve a just, lasting and mutually acceptable solution to the decades-long dispute.”

According to the ministry, Sweden’s “constructive stance” will promote the peaceful and significant development of bilateral relations.

Earlier on Friday, Swedish foreign minister Margot Wallstrom announced that her country had decided after months-long internal consultations not to recognise SADR as an independent state.

“All our energy will be focused into supporting the UN process [of mediation],” she said.

“Recognition would not help this process. The situation in Western Sahara differs from that of other states which Sweden has recognised in the past.

“As a result, the government has chosen not to recognise Western Sahara and rather to support the assessment of earlier governments on this matter.”

Mbarka Bouaida, Morocco’s minister delegate to the minister of foreign affairs and cooperation, told The New Arab that the Swedish government based its decision on a comprehensive report by Fredrik Floren, the country’s ambassador to Tunisia and Libya.

Floren, who was tasked with reviewing the Western Sahara issue last year, submitted his report after visiting Morocco and the region.

In 2015, the Swedish ambassador also met with Bouaida, who said she provided him with all the necessary details for his report.

Bouaida said that Sweden had taken the “right stance” on the Western Sahara issue, adding that SADR could not be recognised because it did not “fulfil any state criteria”.

The decision marks a U-turn for the Swedish left.

When the Social Democrats were in opposition in December 2012, they had voted in favour of a motion urging the government to “recognise Western Sahara as a free and independent state” and to work toward this goal even within the European Union.

However, the Swedish government of the day rejected the move.

– Margot Wallstrom
Despite taking over the government in October 2014 in a coalition alongside the Greens, who had also backed the Western Sahara motion, the Social Democrats have hesitated to become the first EU country to recognise the disputed territory’s independence.

In October 2015, Morocco’s communications minister Mustapha Khelfi announced that Rabat had decided to boycott all Swedish companies and products, including formerly Swedish furniture giant Ikea, in protest against the Swedish government’s “assault on Moroccan sovereignty”, according to Morocco World News.

The boycott campaign fueled a growing diplomatic rift between the two countries, with media reports saying it was in retaliation for Stockholm’s position on Western Sahara.

Ironically, Ikea, which promotes itself as a store selling “affordable Swedish designs”, has not legally been Swedish since it relocated its headquarters to the Netherlands in the 1980s.

Western Sahara, a desert territory in north-west Africa, has been the subject of a decades-long dispute between Morocco and the Algerian-backed Polisario Front, a militant group made up of native Sahrawis calling for independence.

The territory is rich in natural resources, such as phosphate and offshore oil deposits.

Morocco took control of most of the disputed territory in November 1975 after the end of Spanish colonisation, unleashing a war for independence that lasted until 1991.

A UN-brokered ceasefire between Morocco and the Polisario Front has held since then, with a UN peacekeeping mission monitoring the situation in the region, including the Polisario-controlled refugee camps in Algeria, where about 100,000 refugees still live.

Morocco has presented a plan for autonomy, while the Polisario Front’s position is that the territory’s final status should be decided in a referendum on self-determination that includes independence as an option.

However, UN efforts to organise a referendum on the territory’s future have been resisted by Rabat.

Peace talks have since stalled, with the Polisario Front threatening to resume hostilities.

Previous The Rise of “Jihadi Salafism”: From “Ikhwan” to ISIS
Next Libya banned from UN voting after non-payment of subs