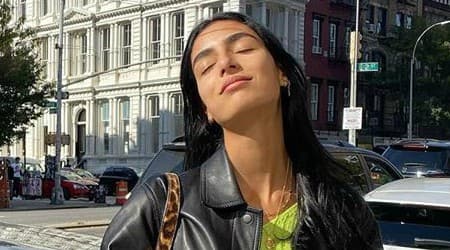 The 21-year-old catwalk star features in the stunning advertorial wearing key pieces from the Spring 2021 collections available on the site.

She can be seen wearing a beige knit piece from Christopher Kane paired with a matching cardigan from Mr. Mittens, a wool Loewe skirt and J.W Anderson’s black chain loafers. Those with a sharp fashion memory will recall that Attal was first scouted by Jonathan Anderson, founder of the J.W Anderson brand, when she was 17-years-old and starred in the brand’s Spring 2014 campaign before she even took her first steps down a catwalk.

While the fashion calendar has largely been put on hold due to the pandemic, Attal has been keeping quite busy. In fact, it’s not the first fashion campaign that Attal has headlined in recent weeks.

In addition to Net-a-Porter and Bottega Veneta, Attal, who is based in London and signed to Viva Model Management and DNA Models, was also the star of the most recent ad campaign for high street retailer Mango.

The model was photographed by Christian Colomer doing mundane household activities such as peeling a pear, reading a newspaper and lounging on a chair while wearing the latest pieces from Mango.

She featured in the new campaign alongside fellow Moroccan model Malika El-Maslouhi, who is also part Italian.

Attal has forged a position as one of the most in-demand models in the world right now — Models.com ranks the 21-year-old as one of the top 50 models worldwide.

Attal has walked for renowned fashion houses such as Prada, Fendi, Dior, Chanel and Versace, to name a few, in addition to appearing in the pages of prestigious publications like Vogue.

The model recently made headlines after she announced her engagement to cinematographer Victor Bastidas in October.

Captioning a series of images of the proposal on Instagram, she told her 45,000 followers: “Forever my life partner… @sictor.”

The proposal took place on a beach in Formentera, an island off the coast of Spain. It is unclear when exactly the couple started dating, but Attal has worked with the UK-based cinematographer for multiple shoots, from magazine covers to brand deals.