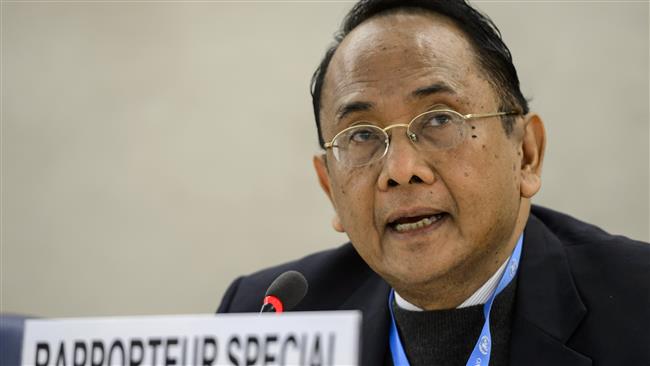 THE LEVANT NEWS — The United Nations expert on the human rights situation in the occupied Palestinian territories has resigned, complaining that the Tel Aviv regime continues to deny him access to the areas he is tasked with monitoring.

In a Monday statement, the UN said Makarim Wibisono submitted his resignation to President of the Human Rights Council Joachim Rucker earlier in the day.

It said Wibisono, who will effectively quit his job as of March 31, had “expressed deep regret that, throughout his mandate, Israel failed to grant him access to the Occupied Palestinian Territory.”
Wibisono has been in charge of monitoring rights violations in the occupied East al-Quds (Jerusalem), the occupied West Bank and the Gaza Strip. The Israeli regime has time and again prevented the UN official from visiting the areas.

In June 2015, Israel denied Wibisono access to the Gaza Strip, where he was to investigate the aftermath of Tel Aviv’s 2014 war that killed over 2,200 Palestinians in the blockaded coastal enclave. The regime said at the time that the mandate handed to the UN official’s team was “anti-Israel,” and that it was exclusively focused on cases of Israeli rights violations.

Last November, Wibisono, and the expert on summary executions, Christof Heyns, slammed Israel for using excessive force and carrying out summary executions against Palestinians amid a surge in tensions in the occupied territories, where Palestinians have held almost daily anti-Israel protests since early October.

The latest wave of tensions was triggered by Israel’s imposition in August of restrictions on the entry of Palestinian worshipers into the al-Aqsa Mosque compound in East al-Quds.

The restrictions have enraged Palestinians, who are also angry at increasing violence by Israeli settlers frequently storming the al-Aqsa Mosque, a place highly revered by the Muslims across the world.

The Palestinian protesters also say Israel has a covert plan for changing the status quo of the al-Aqsa Mosque.

At least 144 Palestinians have been killed since the violence erupted in various towns of West Bank and Gaza. Some of 25 Israelis have also died during the same period.