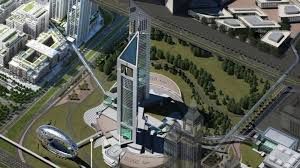 Dubai – Sheikh Mohammed bin Rashid Al Maktoum, Vice President, Prime Minister and Ruler of Dubai, has announced a new district under the name of “Dubai Future District” dedicated to the new economy will take shape in Dubai.
According to WAM news agency, Sheikh Mohammed has also announced the launch of a Dh1 billion ($272 million) fund to support new economy companies who will operate out of Dubai Future District, and who have the potential and foresight to drive Dubai’s new economy and contribute to enhancing its position as a preferred destination for global talents and entrepreneurs.
WAM report added that the new district, along with the new fund, will provide unprecedented financing and legislative facilities and options for businesses.
The Dubai Future District project includes three prominent areas in Dubai: Dubai World Trade Centre, Emirates Towers and Dubai International Financial Centre, all of which have contributed since their establishment to achieving great successes in the economy of Dubai and the UAE. These areas will be connected through a bridge inspired by the Museum of the Future.
The project aims to make “Dubai Future District” the largest innovation area in the world, and providing more success opportunities for entrepreneurs who are looking for growth and expansion in the markets of the Middle East, Asia and Africa.
Ten initiatives will be launched to support the economy of the future by providing an attractive investment, technological, legislative, service and enabling environment that is the best of its kind in the region and globally.
The first initiative is the Dubai Future Economy Fund, which is dedicated to future economy entrepreneurs in Dubai and the region by providing all kinds of support and facilities that are needed by tech start-ups in their early stages.
The fund aims to increase the contribution of the new economy companies in the GDP, create job opportunities, and support private sector and foreign investments in Dubai’s future economy companies.
The second initiative is the office of future economy companies, which will be established and tasked with issuing special five-year residency visas to future entrepreneurs and provide them banking facilities.
The third initiative is the legislative licences to innovate and experiment technologies of the future economy. Entrepreneurs will be able to obtain legislative licences to test their innovations in designated areas that will serve as pilot areas, that will contribute to supporting the economy of Dubai.
The fourth initiative aims to reduce housing prices for the entrepreneurs so they can take advantage of available housing options at a unit price lesser than Dh3,000 per month. Real estate developers will provide housing options at the targeted price.
Under the fifth initiative, a space will be allocated within District 2071 as a unified platform for many entrepreneurs, experts and investors in the future economy, so they can obtain the funding and consultations necessary to start and expand their activities through this platform.
With the sixth initiative, a stock exchange allocated for future economy companies will allow them to obtain financing and raise capital in a more flexible system.
The other initiatives will motivate investors and their shares’ trading, providing training in innovation and developing prototypes, as well as designing of applied research through specialised laboratories (in the field of robotics, artificial intelligence, etc.) They will also encourage the students of universities in UAE, to establish economy companies, so they can work to transform their innovative ideas into future economy companies, by providing them mentoring and guidance, and opportunities to obtain grants and funding from government and private agencies.