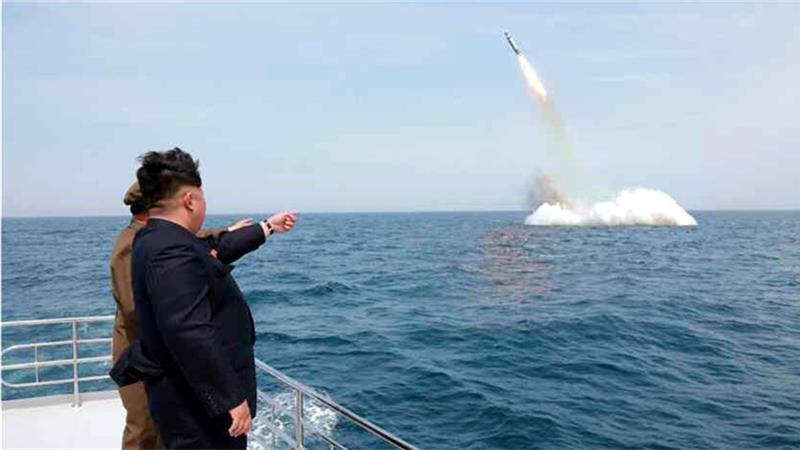 By James Pearson for Reuters – SEOUL — Footage released last week by North Korea purporting to show the firing of a submarine-launched ballistic missile (SLBM) appears to be fake, according to studies by U.S. experts.

In defiance of a U.N. ban, North Korea has said it has ballistic missile technology which would allow it to launch a nuclear warhead from a submarine, though analysis of North Korean state media images casts doubt on the claim.

North Korean state television aired footage on Friday of the submarine test said to have taken place in December. Unlike a previous SLBM test in May, it was not announced at the time.

South Korea’s military said on Saturday North Korea appeared to have modified the video and edited it with Scud missile footage from 2014 although an official told Reuters the ejection technology might have improved since the May test.

An analysis by the California-based James Martin Center for Nonproliferation Studies (CNS) shows two frames of video from state media where flames engulf the missile and small parts of its body break away.

“The rocket ejected, began to light, and then failed catastrophically,” Melissa Hanham, a senior research associate at the Middlebury Institute’s CNS, said in an email. “North Korea used heavy video editing to cover over this fact.”

Hanham said North Korea state media used different camera angles and editing to make it appear the launch was several continuous launches, when in fact it was a single event.

In an analysis on the 38 North monitoring website, John Schilling, an aerospace engineer who is a specialist in satellite and launch vehicle propulsion systems, said it appeared from the video that the launch was conducted from a submerged barge rather than a submarine.

“The failed launch, combined with testing from a barge shows that North Korea still has a long way to go to develop this system,” he said. “An initial operational capability of a North Korean ballistic-missile submarine is not expected before 2020.”

North Korea’s claim that its most recent nuclear test was of a more advanced and powerful hydrogen bomb drew skepticism from the U.S. government and experts. It remains unclear if North Korea has developed a nuclear device small enough to mount on a missile.

Previous State of the Union: Barack Obama sells optimism to nervous nation
Next Secondhand Smoke and Its Harmful Effect on Children’s Teeth