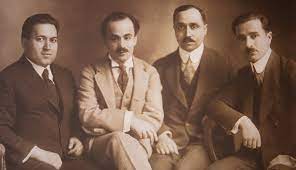 Kahlil Gibran was not the only writer of New York's "Little Syria" who devoted himself to figurative arts. Although amateurish, Ameen Rihani (1876-1940) made several drawings, sketches, and paintings (all of which are held at the Ameen Rihani Museum in his native Freike, Lebanon), and he published some of them in his travel books.

By Francesco Medici
For a short while, Mikhail Naimy (1889-1988) also took on the art of pencil and brush with incurious conviction. In the second volume of his autobiography Seventy: Story of a Lifetime (Sab‘un: Hikayat ‘umr, Beirut, 1959-1960), the "Hermit of al-Shakhroob"[1] Naimy notes a time when he submitted his "artworks" for Gibran's judgment. Here below is a transcription of the amusing story, translated from the original Arabic into English by George Nicolas El-Hage:[2] 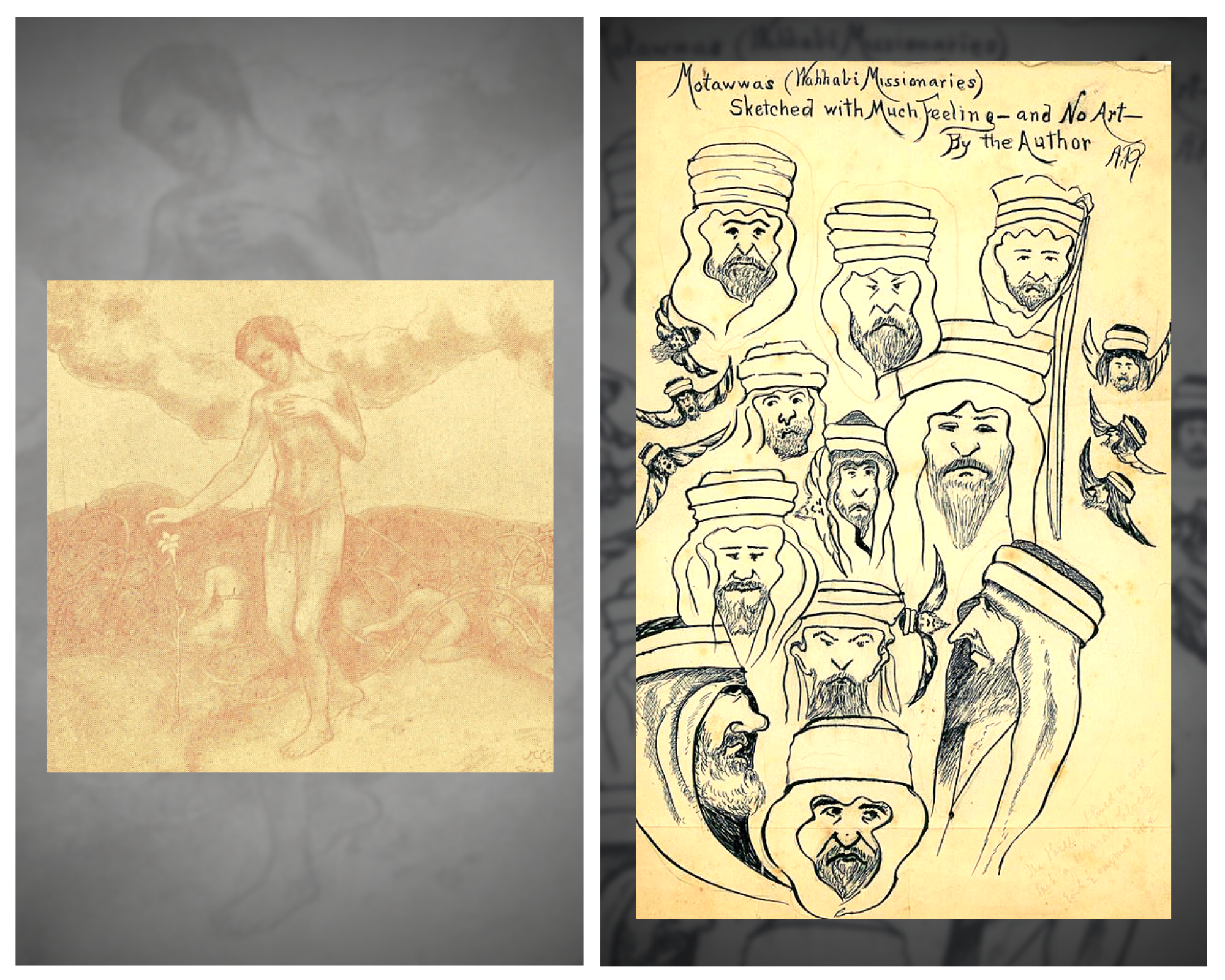 One day as I was sitting in my office behind my desk with some free time, I took a pencil and paper and began to draw some shapes and figures with no particular image in mind… I continued to draw shapes and forms, knowing that I had no previous knowledge of the basics of art or painting, and the only instrument in my hand was a pencil and an eraser… Finally, I collected about six or seven drawings and titled one "The Temptation."

When I finished, I went to see Gibran and have some fun with him, so I carried my drawings and headed to his place. After we chatted for a while, I casually displayed my pictures, pretending they were sent to me by my brother in France. I explained that until then, I had no idea that he was interested in drawing and had attempted to draw anything. Gibran knew I had a brother studying in France, so he picked up the pictures, turned them around, and examined them closely, saying: "What an amazing imagination! What a subtle feeling towards balance and harmony! What a delicate taste and depth in emotion and intellect! This painting that he called 'Life's Expression' fits to be published in the best art journal, and after a slight adjustment, so is the drawing entitled “Experience."

My face betrayed a light smile, which Gibran noticed, and this made him suspicious of my story regarding my brother. He said: "What's behind the smile? Is there a trick?" I assured him that I had no ill intention, but I smiled because I was happy and proud to discover that my brother had a new talent which I previously didn't know about. At this point, Gibran assumed a serious tone and said: "Misha, if I had the opportunity to train your brother for only one month, I would turn him into a new Michelangelo."

I couldn't help but smile again, and Gibran took it as a sign of approval. He picked up the drawings again and began to study them for the second time and analyze my brother's personality based on these drawings: "He is a pensive contemplator who is not impressed with physical and outside appearance. He has a self-determining taste and an independent mood that does not match many other dispositions and tempers. He has a wild sensual passion and other qualities that I shall not mention here." 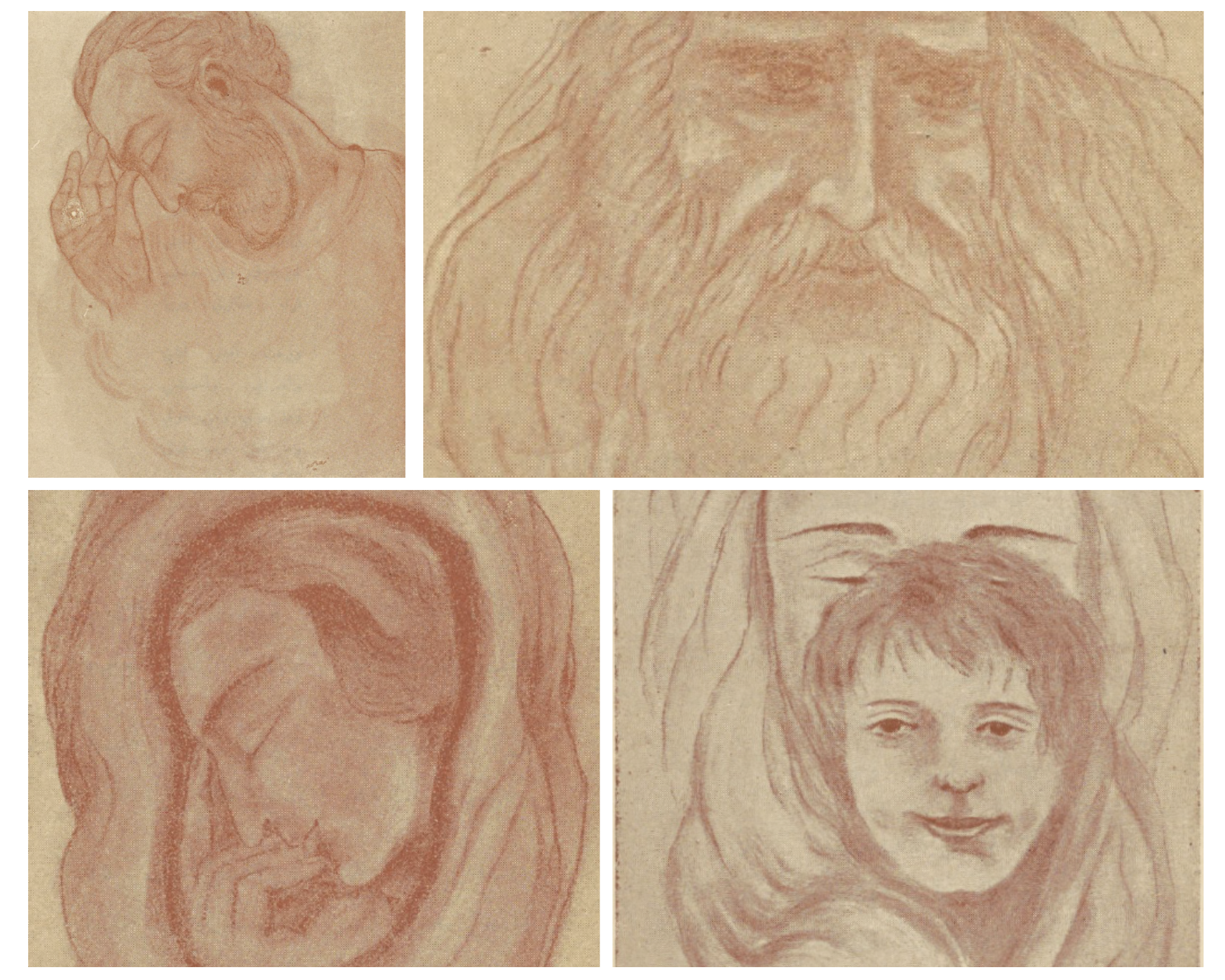 At that point, I couldn't help but laugh loudly which alerted Gibran and caused him to pause and rethink his initial assumption that there was certainly a trick behind all this. He stopped talking and said: "You, Wicked One. I almost fell for your smart ploy. Why don't you behave now, and tell me who really is the artist that drew these pictures?"

When I told him the truth, his face darkened as if he were recalling everything he had said about the drawings and the artist and deciding whether he should change anything or alter any statement. Suddenly, he banged his hand on the table before him and yelled: "By God, I will not change or retrieve any word I have already said." The truth is that I never went to Gibran to study art under him for one month or even one hour, so the world lost the talent of the new Michelangelo. As for my innocent attempts to draw and paint, I gave them up shortly after that.

Oh you wine serving soul, by god, don't fill my cups.
Fill other's cups. As for me, consider me not seated.
Move along. Leave me. Don't say that the wine doesn't appeal.
But I have a wine that nothing like it can quench.

It is my own wine squeezed from my hardened heart.
Oh you player sending tunes from the oud like magic that arouses the lover
to madness, haven't you seen my constricted face and the eyes beneath my brows?
Don't say I’m lovesick (bewildered). No I’m not lovesick, my friend. For my heart is hard as ice.
But I am listening to myself. For in myself, there are strings and songs. Go and leave me among my tunes.

Oh you resident of a glamorous mansion,
have pride and enjoy your beautiful home, my friend.
And may the days give you abundant pleasures and long life. May you reap bliss year after year.
Don't say your lofty mansion didn't appeal and that I didn't enjoy its breeze.
But I have a castle in my thoughts and dreams and I have a castle where my soul seeks solace.

Oh you, seated among graves whose inhabitants have become soil and worms.
No doubt the soul you grieve is a lover or a close friend. Or, if you wish, you may save the best of people.
But tomorrow, you will forget them, whereas in my life, there's a person buried every day.
For I extract who has become a worm to me, along with the many who represent great hope.

Oh, you accumulator of money, toiling nights and days for dime after dime,
whose days are yellow and years colorless, except for gold, blinded by money that goes who knows where.
Know by he who holds thee; know by God who portions out our fate, I don't have a lump in my throat or anguish in my heart by your wealth. For fortune has granted me another kind of wealth.
Accumulate and don't pity my poverty.

Oh you carrying the Bible, calling for abandoning evil deeds and warning of punishment, bring glad tidings and save souls that have gone astray, so that they will be rewarded on judgment day.
My ears are deaf to your call. So forgive me and let me remain astray, for I have a heart that contains paradise and god knows what hell fire it contains. Go and leave my heart in its impurities.

Some of Naimy’s drawings were exhibited in his home in Zalka (since December 15, 2018, in Mtayleb). 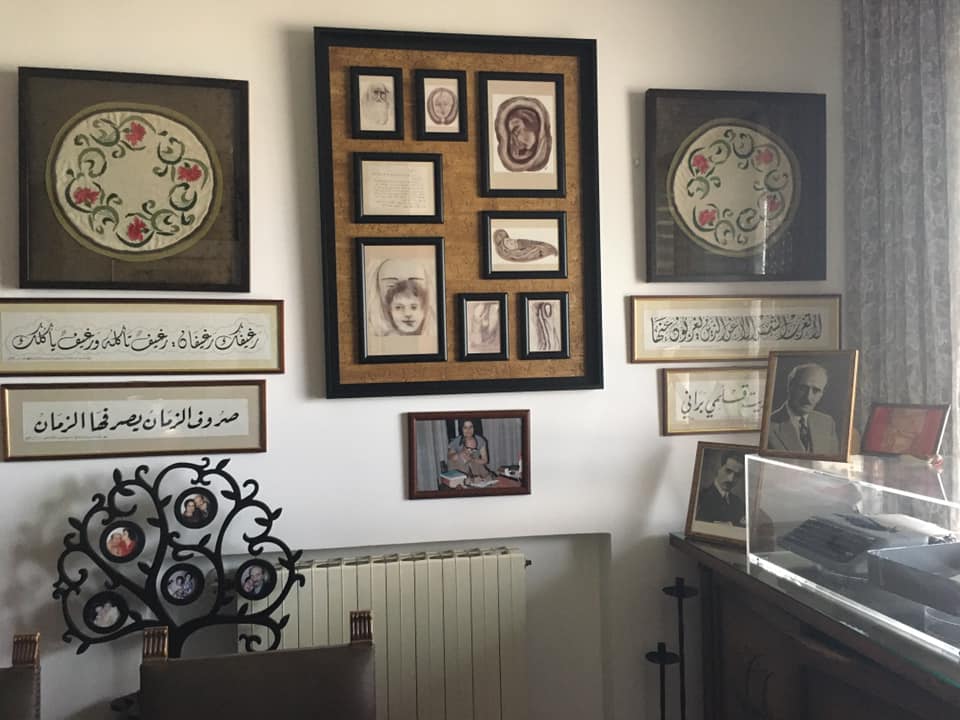 By Glen Kalem-Habib - 2 weeks ago
The 24th of April (today) in 1916 for many Armenians around the world commemorate the tragic events of what is now recognized as the Armenian Genocide (or Holocaust). The atrocities committed by the Turkish-Ottoman forces between 1914 and 1923 are estimated to have killed 1.5 million Armenians, in what is widely accepted as the “first […]
Read story

By Glen Kalem-Habib - 3 weeks ago
“[B]ut it was Blanche’s peculiar astuteness that led to the 1923 publication of Kahlil Gibran’s The Prophet, whose modest initial sales would metastasize 40 years later, in the woo-woo ’60s, helping to lift Knopf into the commercial big-time” By Glen Kalem A new biography on Blanche Knopf, wife of publishing giant Alfred A. Knopf, whose published works […]
Read story

By Glen Kalem-Habib - 1 month ago
Kahlil Gibran's, 1926 work 'Sand and Foam' officially entered the public domain on January 1st, 2022, Ninety-Six years after it was first published.  By Glen KalemPerhaps it was the eagerness of his publishers Alfred A. Knopf who, in 1926, wanted to get Gibran to finish and publish his much-anticipated book, Jesus Son of Man (1928), to capitalize on the rising readership/fame […]
Read story