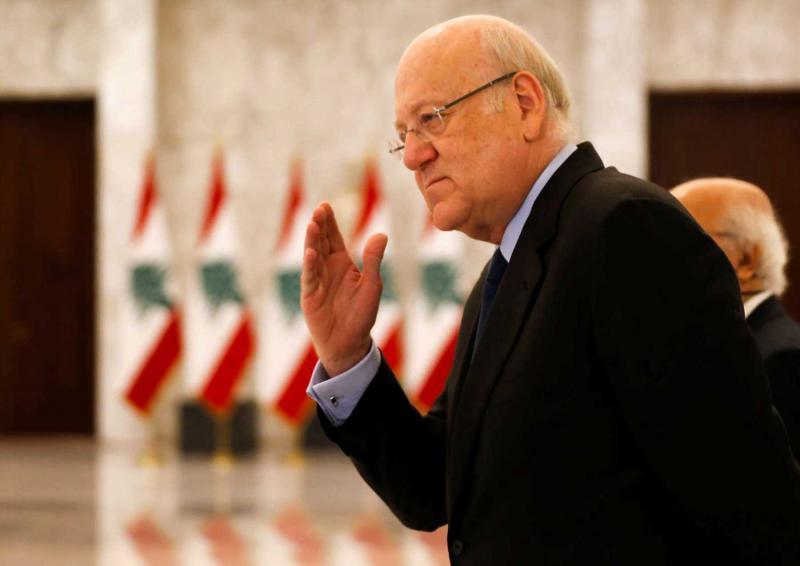 Mikati voted back into PM job

Caretaker Prime Minister Najib Mikati was named PM-designate on Thursday with 54 votes, as former Lebanese ambassador to the U.N. Nawaf Salam received 25 votes and 46 MPs abstained from naming any candidate.

The country’s two main Christian blocs – led by the Lebanese Forces and the Free Patriotic Movement – were among those who did not nominate any candidate.

In a televised address that followed his designation, Mikati thanked both those who named him and those who did not name him, because they “practiced their role with all due democracy.”

“We must all cooperate to rescue our country and people,” Mikati urged, while noting that his hand is extended to “everyone without exception.”

“The chances are still available to rescue what should be rescued,” Mikati noted, calling on the political forces to put their differences aside.

“We no longer have the luxury of time and we have wasted enough time,” the PM-designate warned, cautioning against “drowning in conditions and demands.”

“We are now before the challenge of full collapse or gradual salvation,” Mikati went on to say, adding that the government must “cooperate with parliament to pass the needed reforms.”

The PM-designate also noted that “without an agreement with the IMF, rescue chances will not be available,” calling on all political forces to show “historic responsibility” and “a constructive spirit.”

“I tell my country's sons that my confidence in them is great… We will not allow Lebanon to collapse and we will not waste time. Lebanon will not die and it will overcome its problems,” Mikati added.

Mikati is now supposed to form a new Cabinet that will be in power until the end of October when President Michel Aoun's six-year term expires. Such a short tenure could make it difficult for the billionaire premier to form a Cabinet since it usually takes months to form a government in Lebanon due to political bickering.

The new government's main mission will be to continue talks with the International Monetary Fund over an economic recovery plan for Lebanon, which is in the grip of its worst economic and financial crisis in its modern history.

Mikati has the backing of the powerful Iran-backed Hezbollah and its Shiite ally the Amal Movement. Mikati also has the support of the independent Sunni legislators.

Mikati's previous government that he formed in September became a caretaker Cabinet after the May 15 parliamentary elections that gave the majority of the legislature's seats to mainstream political groups that are blamed for decades of corruption and mismanagement that led to the economic meltdown.

Last month's vote also saw Hezbollah and its allies lose majority seats in parliament that they had held since 2018.

Lebanon's economic meltdown that began in October 2019 was described by the World Bank as one of the worst in the world since the 1850s. Since then, the Lebanese pound has lost more than 90% of its value, tens of thousands have become jobless, and many have left the small nation of 6 million people, which includes 1 million Syrian refugees.

The crisis was made worse by the coronavirus pandemic and a massive blast in August 2020 that killed more than 200, injured thousands and destroyed Beirut's port and damaged parts of the capital.