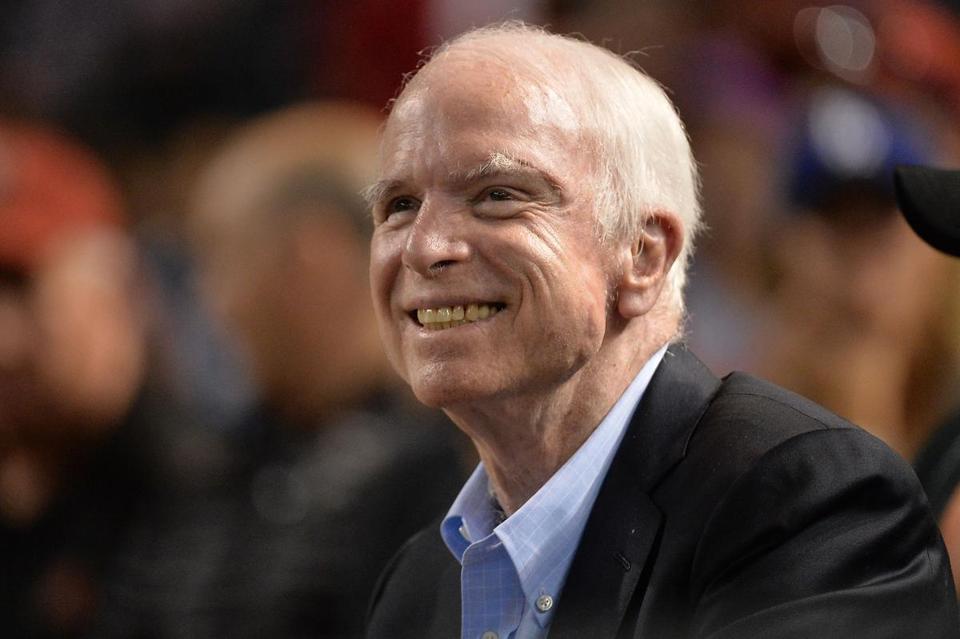 After a week in which President Trump endured not-so-veiled criticisms from his two predecessors as president and Sen. John McCain (R-Ariz.), McCain delivered another broadside that seems clearly aimed at Trump — in the most personal terms yet.

McCain, whose status as a war hero Trump publicly and controversially doubted as a 2016 presidential candidate, appeared to retaliate in kind against the president in a C-SPAN interview about the Vietnam War airing Sunday night. In the interview, McCain pointed to wealthy Americans who were able to get out of being drafted into service in the conflict in which he spent years as a prisoner of war. And he pointed to a very specific type of deferment which Trump just happened to use.

Trump received five deferments during Vietnam: four for his studies in college, and one for — you guessed it — bone spurs in his heel. As The Washington Post reported in July 2015:

For the previous four years, Trump had avoided the draft — and the possibility of being sent to fight in the Vietnam War — by obtaining four separate deferments so he could study at Fordham University and the University of Pennsylvania. With his diploma in hand and his college days over, he was suddenly vulnerable to conscription.

Trump’s exposure to the draft, however, didn’t last long. Two months later, on Sept. 17, 1968, he reported for an armed forces physical examination and was medically disqualified, according to the ledger from his local Selective Service System draft board in Jamaica, N.Y., now in the custody of the National Archives.

The ledger does not detail why Trump failed the exam — the Selective Service destroyed all medical records and individual files after the draft ended in 1973 and the military converted to an all-volunteer force.

In recent days, Trump, a Republican presidential candidate, and his campaign have said that he received the medical deferment because he had bone spurs in his feet. But rather than clear up all questions about why he did not serve in the military during the Vietnam era, they have given shifting accounts that are at odds with the few remaining documents in his Selective Service file.

Trump would later clarify the reason for his final deferment in a 2016 interview with the New York Times: “I had a doctor that gave me a letter — a very strong letter on the heels.” He said the condition was temporary and that it was “not a big problem, but it was enough of a problem.” His campaign continued to be cagey about providing documentation.

As with the previously mentioned criticisms of Trump, this one carries with it at least a whiff of plausible deniability. Plenty of wealthy Americans avoided being drafted into Vietnam, after all, and bone spurs (“a calcium deposit causing a bony protrusion on the underside of the heel bone”) are a somewhat common reason for such deferments.

But it would be a pretty big coincidence for McCain to bring up that particular ailment — especially in light of his regular criticisms of Trump and his clear allusion to Trump's “half-baked spurious nationalism” in a speech two days before taping this interview. Trump has recently targeted McCain for torpedoing the GOP's efforts to replace the Affordable Care Act, among other things.

For all the controversies Trump faced on the campaign trail and has confronted as president, his Vietnam deferments have not even been even close to chief among them. McCain just changed that at a very conspicuous time.