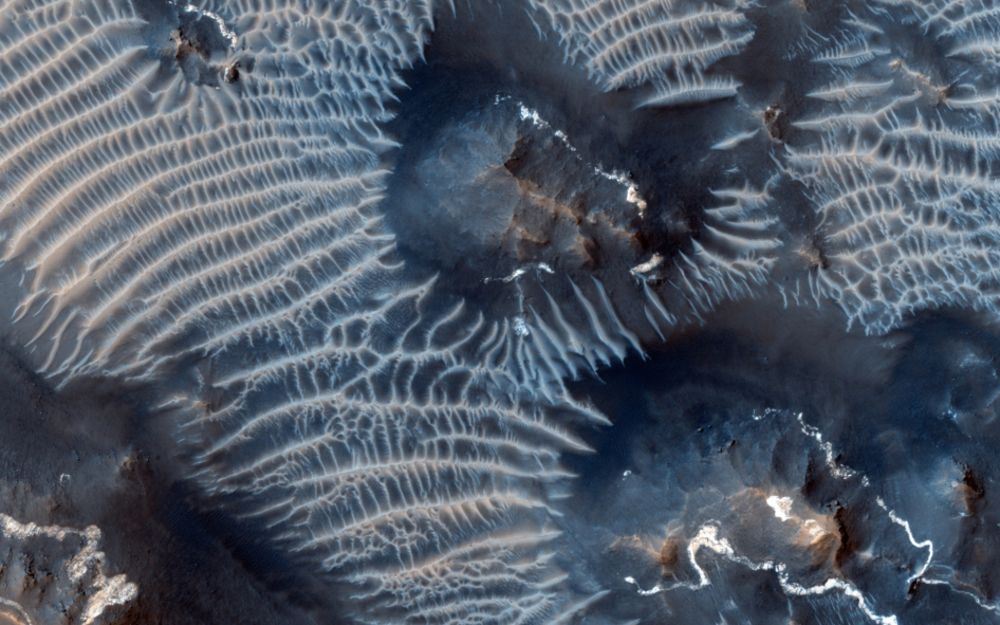 Mars 'ghost' dunes may have evidence of alien life

The research, published in the Journal of Geophysical Research: Planets, shows that each of the ancient dunes (most likely sand dunes) are the size of the U.S. Capitol. They've remained preserved for years because of the way they were composed, with lava and sediment partially burying the dunes over time, causing them to become hardened, the research states.

“We know that dunes on Earth can support life, and dunes on Earth are very similar to dunes on Mars. One problem that Mars has that Earth doesn’t is the surface radiation," said Mackenzie Day, a planetary geomorphologist at the University of Washington and lead author of the study in a statement to the American Geophysical Union. "If you are inside a dune, or at the bottom of a dune, and you are microbial life, the dune is protecting you from a lot of that radiation.”

Barchan dunes march across a plain in the Hellespontus region, west of Hellas basin, on Mars. The orientation of their horns indicates consistent winds out of the east, blowing top to bottom in this image captured by the Mars Reconnaissance Orbiter. Sunshine lights the steep slopes of the leeward, or downwind, faces, on the dunes’ lower sides. The dunes migrate with the wind, sometimes merging or extending long fingers that spawn new dunes. (Credit: NASA/JPL/University of Arizona)
The plain-language summary of the study gives further detail on what researchers can expect from the dunes.

"These pits may contain ancient dune sandstones around the edges of the pits and could be a good place to look for evidence of ancient life," the summary reads. "The shapes of the pits also tell us how the winds behaved in the past."

The dunes were identified thanks to satellite images of the Hellas basin and the Noctis Labyrinthus on the Red Planet.

NASA SHOCKER: ASTRONAUT REVEALS HUMANS COULD HAVE BEEN ON MARS IN THE 1960S

Precedent in the universe
There's precedent for this phenomenon on Earth, as so-called "ghost dunes" were found on the Snake River Plain in eastern Idaho in 2016.

It's highly probable that the dunes at Noctis once stood close to 130-feet tall and the ones at Hellas basin towered even higher, coming in at approximately 246 feet, before the winds and Mars' ancient climate buried them. Known as barchan dunes, these dunes (which are the most common on both Earth and Mars) are "crescent-shaped" and form on flat surfaces, "unimpeded by vegetation, when wind blows mainly from one direction and sand is limited."

Day and her co-author David Catling, an astrobiologist at the University of Washington, observed that these "ghost dunes" are similar in size and scope to the active dune fields on the Red Planet, making it likely the pits are indeed dunes.

"Any one of these pits is not enough to tell you that it's a dune, or from an ancient dune field," Day added. "But when you put them all together, they have so many commonalities with dunes on Mars and on Earth that you have to employ some kind of fantastic explanation to explain them as anything other than dunes."

HOW BUZZ ALDRIN WANTS TO MAKE MARS HABITABLE
Day and Catling estimate that the dunes were buried approximately 2 billion years ago, during either the Hesperian period or Amazonian period. The Hesperian period is significant, researchers say, because that is when the planet's climate changed from a wet environment, with "with flowing water and active volcanoes," to the arid-like and wind-swept climate currently seen on the planet.

It's unclear why the climate changed, but Space.com reports that the atmosphere thinned out, which would make it impossible for water to flow.

"The fact that the wind was different [when the ghost dunes formed] tells us that the environmental conditions on Mars aren't static over long timescales, they have changed over the past couple billion years, something we need to know to interpret the geology on Mars," Day added in the statement.

Day noted the chances of life being inside the ghost dunes are remote, but it could offer insight into the planet's early days and help researchers understand how large features formed.

“There is probably nothing living there now," Day said. "But if there ever was anything on Mars, this is a better place than average to look.”