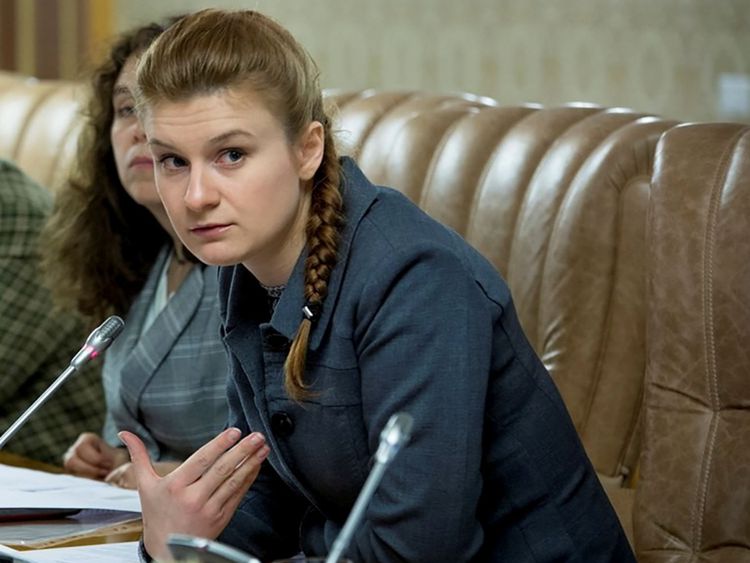 For nearly five years, the young Russian political science student was an unusual fixture at the most important events of the US conservative movement.
Maria Butina, who was indicted this week on charges of being a covert Russian agent, struck up friendships with the influential leaders of the National Rifle Association and the Conservative Political Action Conference, touting her interest in US affairs and efforts to promote gun rights in Vladimir Putin’s restrictive Russia. She sidled up to GOP presidential candidates, seeking first an encounter with Wisconsin Governor Scott Walker and then, after his rising candidacy stumbled, with Donald Trump.

But by August 2016, when she moved to the US on a student visa, the FBI was watching, according to US officials familiar with the matter.
Rather than question or confront her, they said, officials decided to track her movements to determine whom she was meeting and what she was doing in the US — the kind of monitoring that is not uncommon when foreign nationals are suspected of working on behalf of a foreign government.

Public figure Maria Butina delivers a speech during a rally to demand the expanding of rights of Russian citizens, in this undated handout photo obtained by Reuters on July 17, 2018.

By then, Butina had already publicly quizzed Trump about his views on Russia and briefly met his eldest son at an NRA convention. After the FBI began monitoring her, Butina attended a ball at Trump’s inauguration and tried to arrange a meeting between him and a senior Russian government official at last year’s annual National Prayer Breakfast.
By 2017, after she had enrolled as a graduate student at American University in Washington, DC, Butina began probing groups on the left as well, trying unsuccessfully to interview a DC-based civil rights group about its cyber-vulnerabilities for what she said was a school project, according to a person familiar with her outreach.
On Sunday, alerted that she was preparing to leave Washington for South Dakota, where monitoring her would be more difficult, federal authorities arrested Butina.
The 29-year-old was indicted by a grand jury on Tuesday, accused of conspiracy and failing to register as a foreign agent. The indictment alleges that she worked with her contact in the Russian government to infiltrate American political groups as part of a scheme “to advance the interests of the Russian Federation.”
Robert Driscoll, an attorney for Butina, said she is not a Russian agent but merely a student with interest in politics and a desire to network with Americans. “She intends to defend her rights vigorously and looks forward to clearing her name,” he said in a statement.
US officials allege that her activities show the breadth and sophistication of Russia’s influence operations in the US. At the same time, prosecutors say 12 Russian intelligence officers in Moscow sought to affect the 2016 presidential campaign by hacking and releasing stolen documents from Democrats, Butina was roaming the country, building ties on the Kremlin’s behalf with powerful conservative figures, according to court filings.
“The filing of this latest complaint is just further evidence of how far-reaching and carefully planned Russia’s assault on American democracy has been,” said a former US official with knowledge of the Russia investigation, who spoke on the condition of anonymity because of the ongoing probe. “To anyone who doubts that the Russian counterintelligence threat is real, this complaint should be further proof that it’s a threat that is live, real and urgent for the country to grapple with.”
Butina’s activities raise questions about why the NRA and other groups gave her high-level access, allowing her to meet important politicians and influential thought leaders.
NRA officials did not respond to requests for comment.
People who encountered Butina said the gregarious redhead had a life story that appealed to many activists and officials she met at GOP events. She told a conservative radio show in 2015 that she grew up in the woods of Siberia, where her father taught her and her sister to hunt bears and wolves.
After a brief career as the owner of a small chain of furniture stores, Butina moved to Moscow, where she began a career in public relations and founded a group called the Right to Bear Arms to advocate for the loosening of Russia’s restrictive gun laws.
Soon, her group acquired a powerful patron, a Russian senator from Putin’s party who later became the deputy director of Russia’s central bank: Alexander Torshin, a lifetime member of the NRA who had ties with Christian conservatives through an annual prayer breakfast he helped host in Moscow.
Acting as Torshin’s assistant and translator, Butina soon began forming her own connections to the NRA, becoming friendly with David Keene, a past chairman of the American Conservative Union who served as the NRA’s president from 2011 to 2013, as The Washington Post previously reported.
In 2013, Butina and Torshin invited Keene and other American gun enthusiasts to Moscow to attend the annual meeting of her organisation.
There, Butina met Paul Erickson, a South Dakota-based Republican operative who was well known to Republican insiders, going back to the work he did as national political director for Pat Buchanan’s presidential campaign in 1992. She told the Senate Intelligence Committee in April that she began a romantic relationship with the American operative, people familiar with her testimony said.
Erickson matches a description of an American described in court filings as a political operative who helped introduce Butina to influential American political figures “for the purpose of advancing the agenda of the Russian Federation.”
Erickson, who has not been charged, did not respond to requests for comment.
Starting in 2014, Butina began attending annual NRA conventions, according to her social media accounts. She and Torshin got unusual access to elite NRA gatherings, according to a person familiar with NRA event arrangements. In recent years, they were regular guests at Golden Ring of Freedom dinners and VIP events reserved for people who typically donate $1 million to the NRA.
Butina told the Senate Intelligence Committee that neither she nor Torshin made contributions to the NRA other than membership dues, according to people familiar with her testimony. Their warm treatment was extended merely to thank them for serving as hosts to NRA leaders in Moscow, she said.
The NRA, which spent millions more to support Trump than any previous presidential candidate, has denied accepting funding from Butina or Torshin. In an April letter to Senator Ron Wyden, Democrat-Oregon, an NRA official said that other than membership dues, Torshin “has not made any contributions and is therefore not a member of any major donor programme.”