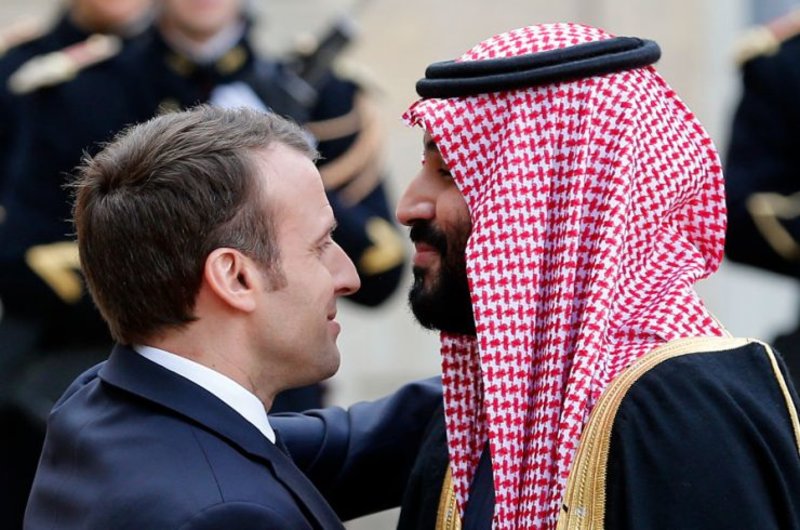 French leader Emmanuel Macron and Saudi Crown Prince Mohammed bin Salman agreed to work "to ease the effects" of the Ukraine war, Macron's office said Friday, after talks in Paris that marked the full diplomatic rehabilitation of the Saudi leader.

Like U.S. President Joe Biden who visited Riyadh earlier this month, Macron had been keen to secure extra oil production from the de facto Saudi leader who was a pariah in the West under recently.

A French statement made no reference to any agreement but said the two men had agreed to "intensify their cooperation to ease the effects (of the war) in Europe, the Middle East and the world".

The dinner between the two men on Thursday evening outraged rights groups because of bin Salman's suspected role in the murder of Washington Post journalist Jamal Khashoggi in 2018.

But the prince is being courted again as Europe and its allies urgently seek fresh sources of fossil fuels to replace lost Russian production.

As he left on Friday, bin Salman expressed his "deepest gratitude and appreciation for the warm reception and hospitality accorded to me and the accompanying delegation" in a statement posted online by the Saudi foreign ministry.

While Biden fist-bumped bin Salman as he arrived in Riyadh, Macron shook hands on the steps of the Elysee Palace as he welcomed the prince.

"He's shaking the hand for a long time of man whose hands are covered in blood," senior left-wing MP Alexis Corbiere told BFM television on Friday.

Allies of the French president defended a meeting that has been widely portrayed as a case study in "Realpolitik" -- putting practical considerations above principles in foreign policy.

Analysts say Saudi Arabia is one of few countries worldwide with the capacity to increase its oil production, though its margin for manoeuvre is seen as limited.

"There are partners, countries that do not all share the same democratic values as France," Public Services Minister Stanislas Guerini, a close ally of the president, told Europe 1 radio.

"But I believe it would be a mistake to not speak, to not try to make things happen," he added.

The role of the president was "to protect the French people," he said.

"French values, the voice of France, human rights, were carried last night, as always, by the president," he added.

The head of Amnesty International Agnes Callamard told AFP she felt "profoundly troubled by the visit".

The killing of Khashoggi was described by a UN probe as an "extrajudicial killing for which Saudi Arabia is responsible".

U.S. intelligence agencies determined that the crown prince had "approved" the operation that led to Khashoggi's death.

"I am scandalized and outraged that Emmanuel Macron is receiving with all the honors the executioner of my fiance, Jamal Khashoggi," his fiancée Hatice Cengiz told AFP on Thursday.

The French president first hosted bin Salman in 2018, when Macron took him to an art exhibition at the Louvre Museum, and travelled to the kingdom in December 2021 for further talks.

The Saudi strongman stayed overnight at his Louis XIV chateau in Louveciennes west of Paris which he acquired in 2015, according to a source who asked not to be named.

Despite its name, the castle was only built in 2009, by a company headed by Khashoggi's cousin Emad, and was described as "the world's most expensive home" at the time of purchase.

By The Levant - 43 mins ago
By Courtney Doggart and Phesheya Nxumalo With the apathetic passing last month of a constitutional referendum solidifying President Kais Saied’s unchecked powers, Tunisia has confirmed its ignominious status as the biggest disappointment of the Arab Spring, having gone from a democratic success story to dictatorship in just over a decade.  As analysts and commentators lament the loss of Tunisia’s […]
Read story