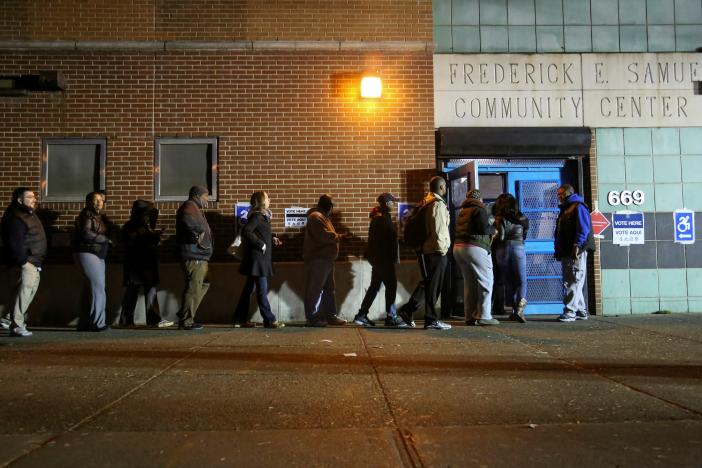 Voters line up to cast their ballot on election day at a polling station in Harlem, New York. REUTERS/Bria Webb

By Andy Sullivan for Reuters| WASHINGTON

Voters reported long lines, malfunctioning equipment, and isolated cases of harassment at polling places in Tuesday’s U.S. presidential election as fears of bigger problems did not appear to be materializing.

Civil rights groups said they were receiving complaints about intimidating behavior at voting sites in Pennsylvania and Florida as supporters of Republican presidential candidate Donald Trump and backers of Democrat Hillary Clinton went to cast their ballots.

But a Democratic Party source said the Clinton campaign was not encountering systemic problems beyond the usual Election Day hiccups. Trump sued the registrar of voters in Clark County, Nevada, with a claim that a polling place in Las Vegas had improperly been allowed to remain open last week to accommodate people who were lined up to vote. Nevada is one of several states that allow early voting.

Trump has repeatedly said the election will be “rigged” but has not provided evidence for his claim. He called on his supporters to watch for signs of fraud in urban areas, raising fears they could harass minority voters. Numerous studies have found that voter fraud is exceedingly rare in the United States.

Tens of millions of voters are expected to cast ballots to conclude what has been an unusually bitter presidential campaign that has lasted nearly two years.

The federal government reduced its election monitoring program in the wake of a 2013 U.S. Supreme Court decision that weakened federal oversight of states with a history of racial discrimination. Revised voting laws and lengthy court battles in many states also have left voters uncertain about when and where they can cast their ballot and whether they will need to present photo identification.

Civil rights groups, who have enlisted 7,000 volunteers, said they had fielded 20,000 calls to a telephone hotline by early afternoon.

Nearly half of those complaints were about polling places not opening on time or voting machines not working properly, said Kristen Clarke, president of the Lawyers’ Committee for Civil Rights Under Law. About 28 percent of calls were from people finding out that they were not registered to vote.

But some were calling to report harassment, she said.

“What we have noticed is an uptick in the number of voter intimidation and voter harassment incidents,” compared with the last presidential election in 2012, she said.

In Broward County, Florida, two election clerks at a polling site were fired after they clashed over how to resolve complaints of voter intimidation, local media reported.

In Jacksonville, Florida, one man refused to leave a polling place when he was asked, she said.

More than half of the voter intimidation complaints were coming from Pennsylvania, where poll workers were reportedly asking voters which candidate they supported, and voters waiting in line were shouting at each other, said Karen Hobert Flynn, president of Common Cause, a grassroots group.

The Philadelphia district attorney’s office, which monitors voting in the state’s largest city, said on Twitter it was not receiving any complaints out of the ordinary.

Durham County in North Carolina agreed to extend the poll closing time to 8:30 p.m. after computer problems, the state chapter of the NAACP said.

Previous Smoking ’causes hundreds of DNA changes’
Next Clinton has 90 percent chance of winning: Reuters/Ipsos States of the Nation