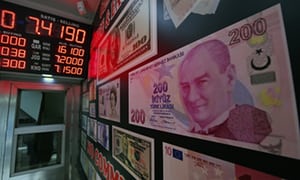 Direct non-hydrocarbon economic links between the GCC and Turkey are relatively limited; however the sharp decline in Turkish lira against the dollar in recent months is likely to impact GCC’s non-oil exports to Turkey, according to economists.
According to a research note from Abu Dhabi Commercial Bank’s (ADCB) economic research team, the UAE’s non-oil trade with turkey is likely to be impacted by the currency turmoil to some extent.

Turkey remains a key destination for UAE non-oil exports, with IMF data showing that the UAE was the 13th largest source of imports into Turkey in 2017. UAE data indicate that Turkey was the second-largest destination for the UAE’s non-oil exports in 2017 in value terms, accounting for about 9 per cent. The main exports from UAE to Turkey are precious metals and stones, accounting for about 90 per cent of non-oil exports in 2017, and to a much lesser degree aluminium and plastics.

“The crisis in Turkey will likely have a focused impact in the precious metals sector, with some negative effect on the UAE’s non-oil export performance in 2018. Nevertheless, the concentration of exports in this sector should limit the impact on the UAE’s overall GDP and total exports, including oil,” said Monica Malik, chief economist of ADCB.

Impact of events in Turkey on the UAE’s overall trade is likely to be limited as the country’s non-oil exports combined with re-exports to Turkey was only about 3.6 per cent in 2017. Moreover, total UAE exports to Turkey, including oil, accounted for 1.4 per cent of 2017 nominal GDP.
“Turkey is not a main source of tourism either in Dubai (not in top 25 countries) or Abu Dhabi (not in top 10 countries). In addition, Turkish nationals were not among the top ten purchasers of Dubai properties in 2017,” said Thirumalai Nagesh, an economist at ADCB.
The Turkish lira has depreciated dramatically over the last few days. Year to date the currency has fallen more than 42 per cent. However, analysts said it is not the overall macro backdrop of Turkey that is so disastrous as to justify the sharp drop of the currency.
“The sharp depreciation of the currency is driven by the fact that the Turkish economy is in constant overheating mode, with inflation above 15 per cent. The reluctance of the central bank to step in has been weighing on the lira. Increasing signs that President Erdogan has been expanding his powers into the central bank, preventing rate hikes and articulating an outright demonisation of high interest rates, has led to the panic selling of the currency,” said David Kohl, Chief Currency Strategist, Julius Baer.
Impact of dollar gains
Apart from the currency turmoil in Turkey, a broad based strengthening of dollar has been impacting many other emerging market currencies. While the spillover from Turkey is going to be limited on most emerging markets because of the small share of trade, economists say the contagion effect is expected to affect emerging market currencies.
According to ADCB economists recent Turkey developments are an additional headwind to emerging market currencies. The Russian rouble has been under pressure from US sanctions on Russia. India hiked benchmark interest rates in June and August to limit inflationary pressure given the weakening of the rupee and the higher oil price.
Among the GCC countries, analysts think the UAE will see the greatest impact if emerging market currencies remain under downwards pressure, impacting external non-oil competitiveness given its more diversified economy. The strengthening of the dollar has already impacted key service sectors, whilst Jebel Ali throughput volumes have been relatively flat in the first half of 2018.
“India, China and Russia are key source markets for the UAE’s non-oil sectors (tourism, hospitality, real estate, etc), alongside Europe, which is also seeing a weakening in currencies (EUR and GBP) for various reasons. We do not believe that recent developments will result in a downward adjustment of our UAE real non-oil GDP growth forecast at this point, though they will contribute to keeping external demand soft,” said Malik.

By The Levant - 11 hours ago
The Democrats' "Inflation Reduction Act" - which according to the Congressional Budget Office will raise taxes on the middle class to the tune of $20 billion - not to mention unleash an army of IRS agents on working class Americans over the next decade, was made possible by Bill Gates and (in smaller part) Larry Summers, who have […]
Read story

By The Levant - 13 hours ago
The stabbing of author Salman Rushdie has laid bare divisions in Lebanon's Shiite Muslim community, pitting a few denouncing the violence against fervent followers of Hezbollah who have praised the attack. The attack struck close to home among Lebanon's Shiites. The assailant, 24-year-old Hadi Matar, is a dual Lebanese-U.S. citizen, and his father lives in […]
Read story

By The Levant - 13 hours ago
Interconnecting Inner Eurasia is an exercise in Taoist equilibrium: adding piece by piece, patiently, to a gigantic jigsaw puzzle. It takes time, skill, vision, and of course major breakthroughs. By Pepe Escobar A key piece was added to the puzzle recently in Uzbekistan, bolstering the links between the Belt and Road Initiative (BRI) and the […]
Read story