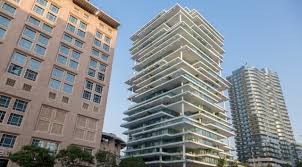 By Dr. Haytham Mouzahem – BEIRUT —Despite the crisis of forming the government in Lebanon, there are efforts by the Ministry of Finance and parliamentary blocs to find a solution to the housing loan crisis in Lebanon.

Finance Minister Ali Hassan Khalil announced on Monday Aug. 27 that the Ministry of Finance will approve the interest differential required for new housing loans and announced that preparations for the legal mechanisms based on this approval have been prepared to be ready in a very short period of time.

Khalil’s speech came during a meeting with Director-General of the Housing Foundation Roni Lahoud, where they both agreed to begin preparing legal mechanisms to find a solution to the housing crisis.

MP Chamel Roukoz of the “Strong Lebanon” bloc announced on Aug. 9, that his bloc proposed a law to solve the ongoing housing crisis. This proposal is based on the state subsidizing 5% for every housing loan. The subsidies would be financed by the income tax imposed on banks.

The crisis started first in February 2018 when Central Bank of Lebanon (BDL) allocated the amount of 1495 billion Lebanese pounds (about 992 million dollars) only for subsidized housing loans, and put a “quota” for each bank. Since the banks were before the decision of BDL has given approvals on a large number of subsidized housing loans out of the value of the new “quota”, this put a number of loans applicants in trouble, especially those who obtained approvals from banks and paid a down payment to the owners of real estate. Thus, President Michel Aoun requested on 5 March 2018 from the Governor of the BDL Riad Salame to find a solution and secure the disbursement of housing loans that the banks have committed to pay to the outstanding applicants. Salame agreed to solve the issue of those applicants only while the new applications should be included in the 2019 supported loans.

On July 9, in the midst of the crisis of government formation that entered its fourth month, the Public Corporation for Housing (PCH) in Lebanon decided to stop accepting any new housing loan applications. PCH cited lack of funding for subsidized housing loans. This culminated into a crisis affecting Lebanese citizens who had concluded contracts with real estate owners to buy houses, banking on the PCH to obtain subsidized loans from private banks.

In the framework of political moves to find solutions to the crisis, the Future Bloc submitted July 9 a proposal for a law providing for the state’s commitment to subsidizing interest on loans granted by the PCH. The Ministry of Finance rather than the Central Bank will be providing the financing, as a part of the annual budget allocated to he housing loans.

All of what we are saying today is that these loans, which were supported by the Banque du Liban and as a result of its suspension, will be supported by the Lebanese state and will issue building decrees for the proposal of the Ministry of Finance in coordination with the General Establishment for Housing to determine the highest ceiling

Many young couples who had planned to get married postponed their plans in light of this ongoing crisis. Add to this, Lebanon youth emigration increased.

This prompted President Michel Aoun to follow-up on this issue. On July 25, while hosting a delegation from the Real Estate Traders’ Union in Lebanon at the Baabda Presidential Palace, Aoun said he was following closely the housing loan crisis with the Central Bank of Lebanon (BDL). Aoun, however, noted that resolving this crisis could take some time.

For his part, Rony Lahoud, Chairman of PCH said in a press statement to Al-Hayat newspaper on July 10 that the halt of acceptance of new loan applications reflects the PCH’s rejection of discrimination between eligible applicants. Al-Hayat also quoted the PCH media office as saying that this decisions aims to counter “interventions and favouritism. ” It noted that “banks were dealing with housing loan applicants in a discretionary manner.”

On the cause of the crisis, economic expert Jassim Ajaka explained to The Levant News that “BDL has not stopped subsidizing housing loans, but has modified its subsidy mechanism, after commercial banks exhausted the budget allocation of 2017 and 2018 in the last two months of 2017. Instead of these loans being financed by funds from BDL at a 1% interest rate, BDL asked banks to finance housing loans from their own funds, provided that the BDL subsidises interest on these loans. Lebanese banks refused.”

Local news reports reported that BDL sources and some analysts and experts are alleging Lebanese banks have not exhausted the subsidized loans quota granted to them and are refraining from receiving subsidized loan applications. Banks are said to have kept the funds allocated by the BDL for housing loans in favour of specific clients to facilitate the business affairs of real estate dealers who are these banks’ favoured clients.

According to Al-Hayat article, Real Estate Traders’ Union in Lebanon BDL quoted Governor Riad Salameh in a statement saying that “BDL allocated $2.3 billion in long-term subsidized housing loans as well as $800 million directly financed by private banks. All of these allocated funds have been exhausted over the 13 months since the beginning of 2017. Introducing new housing loans has to wait until the beginning of 2019.” [http://www.businessnews.com.lb/cms/Story/StoryDetails.aspx?ItemID=6432]

Ajaka does not see much impact on the housing market because the number of subsidized loans is 5,000 out of a total of 53,000 real estate transactions per year. “The crisis entails a decline of about 9%, which does not mean the collapse of the real estate sector. The coming phase will see more flexibility in prices, rather than a correction process, because this sector remains one of the most promising sectors.”

Ajaka noted the swift solution would be by releasing 100 billion LPB pounds as stipulated in the budget of 2018 to subsidize housing loans, adding that “the funds are available and an order to release them must be issued.”

He continued, “On the long term, the government will have to adopt a rational and reasonable housing policy involving several steps, including the imposition of taxes on vacant apartments, which would be sufficient to meet demands for housing loans for residential purposes over a period of 10 years.”

Lebanese journalist Simon Semaan believes the crisis is no longer about real estate alone. In an article to al-Masira magazine on July 16 he said the crisis has “turned into a deadly economic, social and humanitarian issue,” with observers estimating that 30% of wedding parties have so far been cancelled or postponed this year.

Ajaka, however, does not believe the crisis had a major impact on the real estate sector or on weddings. “The economic crisis and unemployment are the main factors behind the weak purchasing power of the private sector,” he argued.

Apartment prices in Lebanon outside the commercial and luxury areas of Beirut range between $150,000 and $500,000. Young people from low and middle income classes are not able to buy apartments in cash. Their only option is to resort to the PCH and the Housing Bank —to get soft and subsidized loans.

Raafat, 30, working in commerce and living in Beirut, told The Levant News that he had conclude a sale contract with a building owner to buy an apartment [in February]. He paid him a third of the price and was supposed to get a housing loan to pay the rest. But after the cessation of housing loans he was forced to break the contract. He was left with no apartment and had to postpone his wedding, in the hope that the PCH would resume granting loans.

Souad, 27, is a teacher living in Beirut’s southern suburbs. She told The Levant News she got engaged to a young civil servant and the two were planning to marry next spring after taking out a housing loan. “For now, we decided to postpone the marriage until the housing loans crisis resolves,” she said.

Meanwhile, economic expert Ghazi Wazna believes the housing loan crisis will be solved after the formation of the government.

“The new government can increase the funds for these loans in the budget of 2019 or approve a draft law to increase subsidies for housing loans,” he told The Levant News. “A new law to solve the crisis requires a General Assembly of the House of Representatives, which in turn requires a government and not a caretaker government.”

Wazne commented on the two proposals by the Future Bloc and the Strong Lebanon Bloc. “These two proposals are marred by violation of the law,” he said. “They call for exempting banks from paying some taxes on their annual profits to subsidise interests on housing loans and this is a violation of public finance law,” in terms of the allocation of specific revenues for specific spending. The Future Bloc project called for “the commitment of the Lebanese state to support the loan subsidy that has been granted by the PCH through the direct payment by banks of the value of this support through a set-off between the amounts that represent this support and taxes paid by banks.

Ajaka believes that the solution could be in not mentioning the specification of spending these revenues in the law and submitting two laws: One for reducing the taxes on the banks, the other for supporting the housing loans. He indicated that the law should wait the formation of the government that has to discuss because of its financial impact due to the reduction of these taxes.