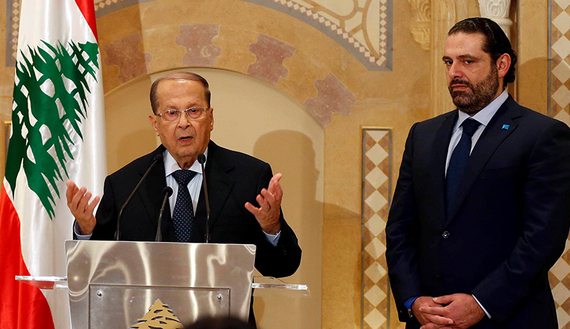 THE LEVANT NEWS — Lebanese President Michel Aoun suspended parliament on Wednesday to prevent it from extending its own term for the third time in less than four years.

The legislature had been due to meet on Thursday to vote on an extension.

In a live televised speech, Aoun said he had decided “to postpone the House of Representatives meeting for a month” amid deadlock over a new electoral law.

Under the constitution, the president can suspend parliament for up to a month.

Aoun’s Free Patriotic Movement and the Lebanese Forces party of his ally Samir Geagea have called for mass protests on Thursday in central Beirut to prevent parliament voting through a further extension to June 2018.

The current term had been due to end in June 2013, but the House of Representatives voted to extend that by 13 months as the parties wrangled over a new elections law.

In November 2014 it then voted through a further extension of two years and seven months.

Each party is pushing for a law that would give it the maximum possible advantage in legislative polls within Lebanon’s complex confessional system.

The constitutional deadline to set a date for elections passed without agreement on a new law.

Aoun was elected president in October after two and a half years of political stalemate.

His appointment was the result of an accord between two fierce rivals – Christian leader Geagea and Sunni former and current premier, Saad Hariri.

The resulting government included most parties in the parliament, but the row over the elections law remains unresolved.