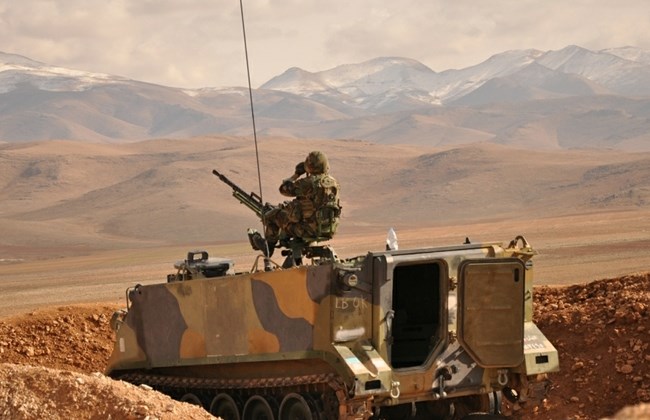 File - A Lebanese Army soldier on an APC near Ras Baalbek, Lebanon. (The Daily Star/Nicholas Blanford)

Lebanon peace with Israel a no-go among Arab Twitter users

Almost 3 of 5 Arab News readers are cool to the proposition that Lebanon sign a peace agreement with Israel, who continue to be technically at war for decades now and with sporadic clashes erupting in border areas between the two countries.

About 57 percent of respondents of a Twitter straw poll do not support a possible peace deal between Lebanon and Israel, compared with 43 percent who took the opposing view.

Conflict between the two countries peaked in the 1980s when Israel laid siege to Beirut to cripple Palestine Liberation Organization forces who have been attacking Israeli border communities. Armed confrontations have since declined after a UN-broker ceasefire took effect in August 2006.

Lebanese President Michel Aoun, in an earlier interview with French news channel BFMTV, dropped hints on the possibility of an eventual peace with the Jewish state when he responded to a question regarding it: “That depends. We have problems with Israel, we have to resolve them first.”

UAE Foreign Minister Anwar Gargash said that Arab countries were at ‘different stages’ in normalizing relations with Israel and that the Emirates’ relationship with Jerusalem in future will be a “warm peace.”

“The region does need a strategic breakthrough,” he said.

Previous Facebook implicated in racist militia violence in US
Next Many Faces of Eve: Mackenzie Davis on the State of America’s Female Union! – PART II

Fires caused by an Israeli “aggression” at Syria’s Latakia port on Tuesday had been extinguished, …